Maryland softball pitchers Schlotterbeck, Wyche have stepped up when it mattered most 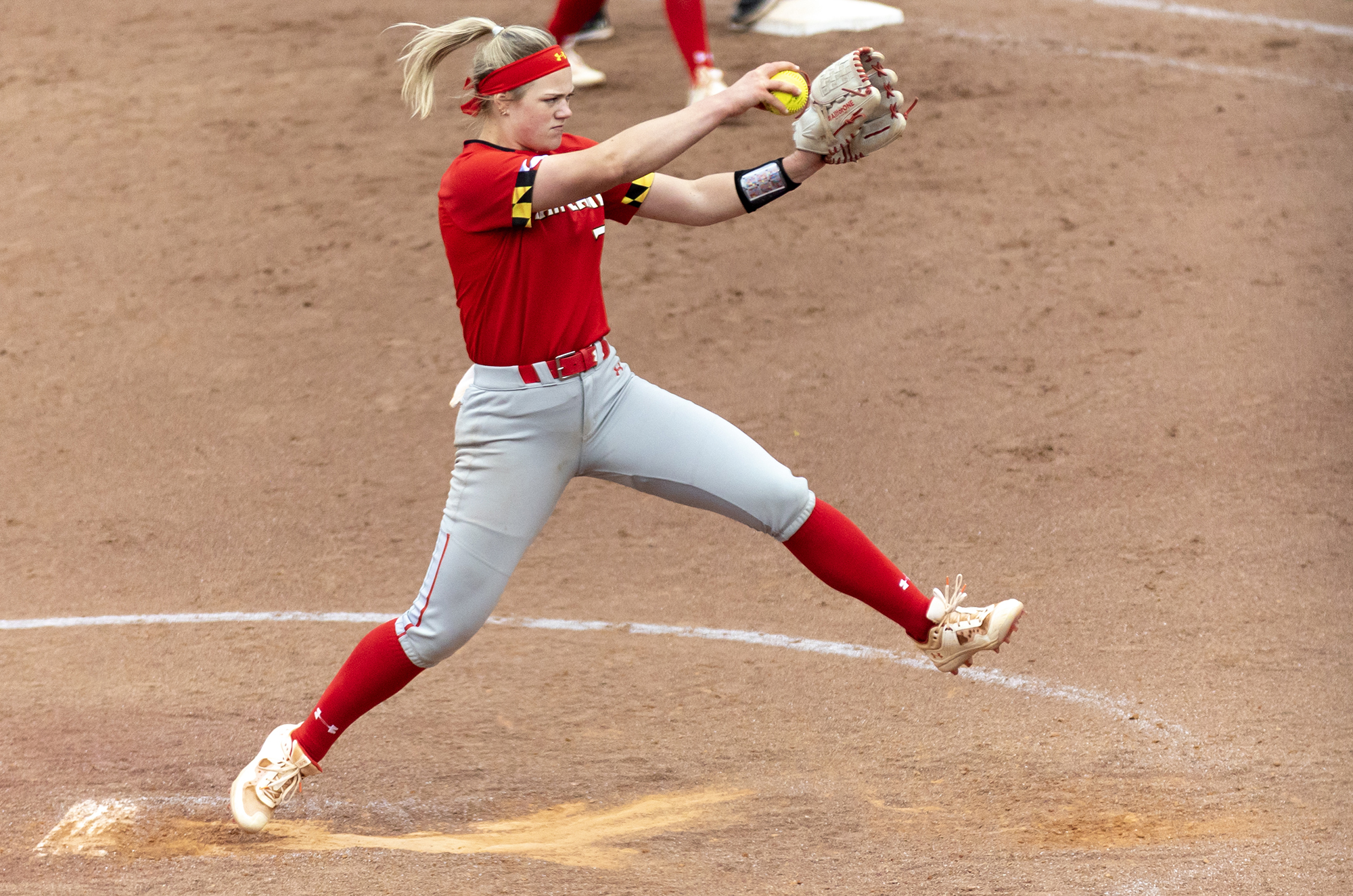 Trinity Schlotterbeck winds up for a ptich during Maryland softball's 5-2 win over Coastal Carolina on Saturday, Feb. 26 (Julia Nikhinson/The Diamondback)

During its last matchup of THE Spring Games against then-No. 17 Missouri, Maryland softball was neck and neck with the Tigers. Neither side could scrape across a run entering the late innings.

Coach Mark Montgomery inserted Trinity Schlotterbeck and Courtney Wyche in the top of the seventh inning, aiming to send the game to the bottom half of the inning still tied.

Schlotterbeck got the first out of the inning, then gave up a single to left before striking out the next batter for the second out and turning the ball over to Wyche. Wyche only faced one batter, giving up a walk, before Schlotterbeck returned to the mound in a tough spot.

Schlotterbeck hit the first batter she faced, loading the bases with two outs. The next batter grounded out to second, ending the inning and keeping the game tied.

Maryland went on to walk off the game in the bottom of the seventh for an upset victory, spearheading the Terps into a winning stretch.

“[Schlotterbeck] and Courtney [Wyche] last year were 1A and 1B, and then Trin got sick and went down. She’s just now bouncing back into that … we feel confident with either one of them going out any time,” Montgomery said.

[Maryland softball came out swinging in the Chanticleer Showdown]

Both Schlotterbeck and Wyche were used in difficult situations against the Tigers. They bent but didn’t break on the mound, keeping Maryland in the game and putting the Terps on a trajectory for a successful next few games.

The Terps struggled to a 2-5 start to their 2022 campaign. Montgomery tinkered with his pitching staff, searching for the best use of arms on the mound, and rotated between Wyche, Schlotterbeck, Kyra Pittman and Haley Ellefson through the early stages of the season.

Pittman, a freshman, was thrown on the mound early. In the Terps’ third game of the season, Pittman entered in a big stage on the mound — up by one in the top of the seventh, looking to close out the game.

Pittman was unable to do so, allowing two runs to score in Maryland’s eventual tenth-inning loss.

“She had pitched really nicely the day before, but we brought her into a one run game and she struggled, and that’s just part of being a freshman,” Montgomery said.

Ellefson has been used intentionally throughout the season, either brought in during high leverage situations or given a start when rest was needed for Wyche and Schlotterbeck.

In Maryland’s recent winning stretch — the Terps have won six of their last seven games — Schlotterbeck and Wyche have been the driving force of the pitching staff. They’ve started all but one of the games and have thrown 70 percent of the innings in that stretch.

Wyche has been clinical for the Terps all season, ranking top fifteen in the Big Ten in both ERA and wins. Wyche has a 1.98 ERA, a 4-1 record and is averaging more than a strikeout per inning.

Having been used as both a starter and a reliever, Wyche’s mentality on the mound stays the same in each role.

“The focus increases depending on the situation, but obviously, [I] have to be of service any time I step on the mound,” Wyche said.

Schlotterbeck has been the workhouse on the mound for Maryland, leading the Terps with over 38 innings thrown behind the rubber. Schlotterbeck has pitched in more than half of Maryland’s games this season and has thrown at least three innings in all but one outing.

In the Chanticleer Showdown, Wyche and Schlotterbeck started four of the five games. In the finale of the invitational, Wyche started the game, and Schlotterbeck finished in relief, throwing three excellent innings to secure the win.

Montgomery used his duo to cap off the weekend on a high note, extending the Terps’ winning streak to four.

“I think everyone’s excited. There’s a lot of positivity going on right now. We’ve changed our mindset to not just winning but to loving the game and playing for the fun of it, which I definitely think has helped us be successful last weekend,” Schlotterbeck said.

Maryland enters the Queen City Classic with plenty of momentum. The Terps will face off against Villanova and UNC Charlotte on Friday, and Boston College and Villanova on Saturday.