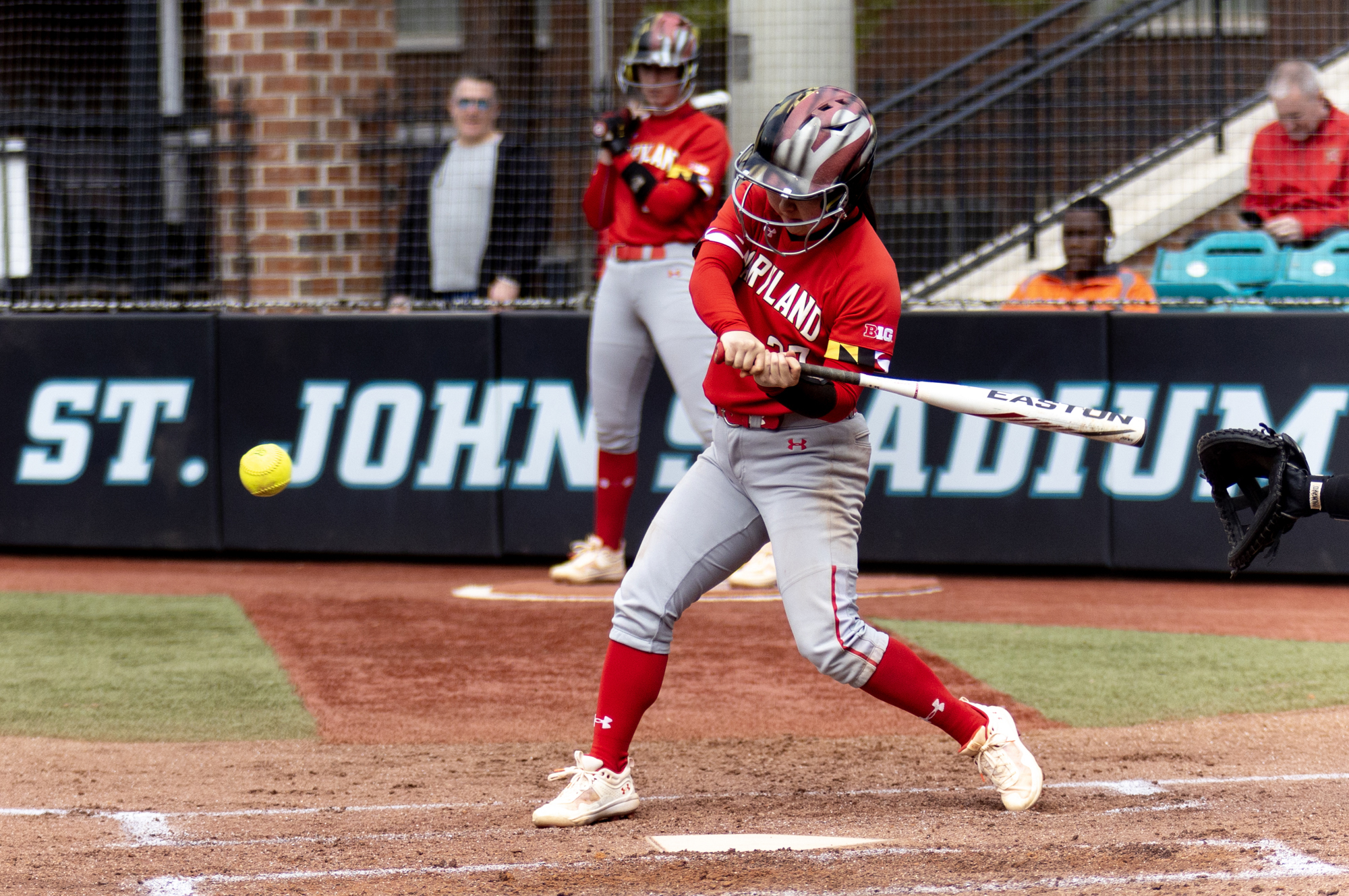 With its first game of the day in extra innings,  Maryland softball looked for its first lead. Following a popup to start the inning, Mackense Greico doubled to center field. Haley Ellefson grounded out, advancing Greico to third with two outs.

On a 2-2 count, Taylor Okada singled up the middle to score Greico and give the Terps a 2-1 lead, their first of the game.

Maryland shut the door in the bottom half of the inning, securing a win over Villanova, 2-1.

The Terps split their Friday doubleheader, defeating the Wildcats before falling to Charlotte, 5-2. The victory over Villanova was Maryland’s fifth straight until the 49ers ended the streak.

In the Terps’ first game of the day, Maryland had a golden opportunity to score in the top of the first.

An error and two walks to the Terps’ first three batters of the game set up the bases loaded with no outs. However, back-to-back strikeouts and a groundout to the pitcher ended Maryland’s threat without a run crossing home.

[Maryland softball pitchers Schlotterbeck, Wyche have stepped up when it mattered most]

In the bottom half of the inning, the Wildcats struck first.

With a runner on second and two outs, Ally Jones singled up the middle, scoring Paige Rauch for the first run of the game.

After one inning of play, Villanova led 1-0.

The scoring stopped after that for the next few innings as both pitchers settled in. Sara Kennedy — the Wildcat’s starter — cruised through five innings without a hitch. Kennedy didn’t allow a hit and struck out four batters.

Maryland notched its first hit in the top of the sixth off the bat of Greico. Greico led off the inning with a double through the left side, putting pressure on Kennedy to get out of the jam and keep Villanova ahead.

Ellefson stepped into the batters box as a pinch hitter for Trinity Schlotterbeck, and the move by coach Mark Montgomery was a success. Ellefson singled to drive home Greico, tying the game at one-a-piece. The Terps were unable to score another in the inning, sending the game to the bottom of the sixth, tied 1-1.

Maryland and Villanova remained tied after the seventh, sending the game to extras.

With one out in the top of the eighth, Greico doubled and then moved to third following a groundout. Okada stepped up to the plate and gave the Terps the lead, 2-1, on an RBI-single.

Wyche didn’t allow a run in the bottom of the eighth, clinching Maryland’s 2-1 win over the Wildcats for its fifth consecutive win. She pitched all eight innings for the Terps, and notched a career-high 16 strikeouts in the process. The win improves Wyche’s record to 5-1.

In game two, Charlotte had a prime opportunity to score first in the bottom of the third.

Anna Devereaux led off the inning with a single and a stolen base put her at second with no outs. The next batter grounded out to second, advancing Devereaux to third.

Bailey Vannoy entered the batters box looking to drive home Devereaux. On an 0-1 count, Vannoy hit a sacrifice fly to deep center field, easily scoring Devereaux to give the 49ers a 1-0 lead.

Charlotte extended its lead the very next inning.

With two outs in the inning, Ella Chancey crushed a solo home run to straightaway center.

[Maryland softball came out swinging in the Chanticleer Showdown]

The 49ers weren’t done scoring as they plated three more runs in the bottom of the fifth off the bat of Madelyn Wright. Wright crushed a three-run homer over the wall in left field to give Charlotte a five-run cushion.

Following the home run, Maryland’s starter — Schlotterbeck — gave up a single, prompting her exit from the circle.

The Terps  finally joined the 49ers on the scoreboard in the top of the sixth.

Campbell Kline stepped up to the plate with runners on the corners and two outs. Kline grounded the ball to second, but Kiyah Garrett tried to throw out Ruby Butler going from first to second.

Butler got in ahead of the throw, allowing Michaela Jones to score Maryland’s first run of the game on the fielder’s choice.

Okada lined a single up the middle for an RBI in the seventh, but the Terps couldn’t muster any other runs in the inning as they fell to Charlotte, dropping them to 9-7 on the season.