Maryland softball came out swinging in the Chanticleer Showdown 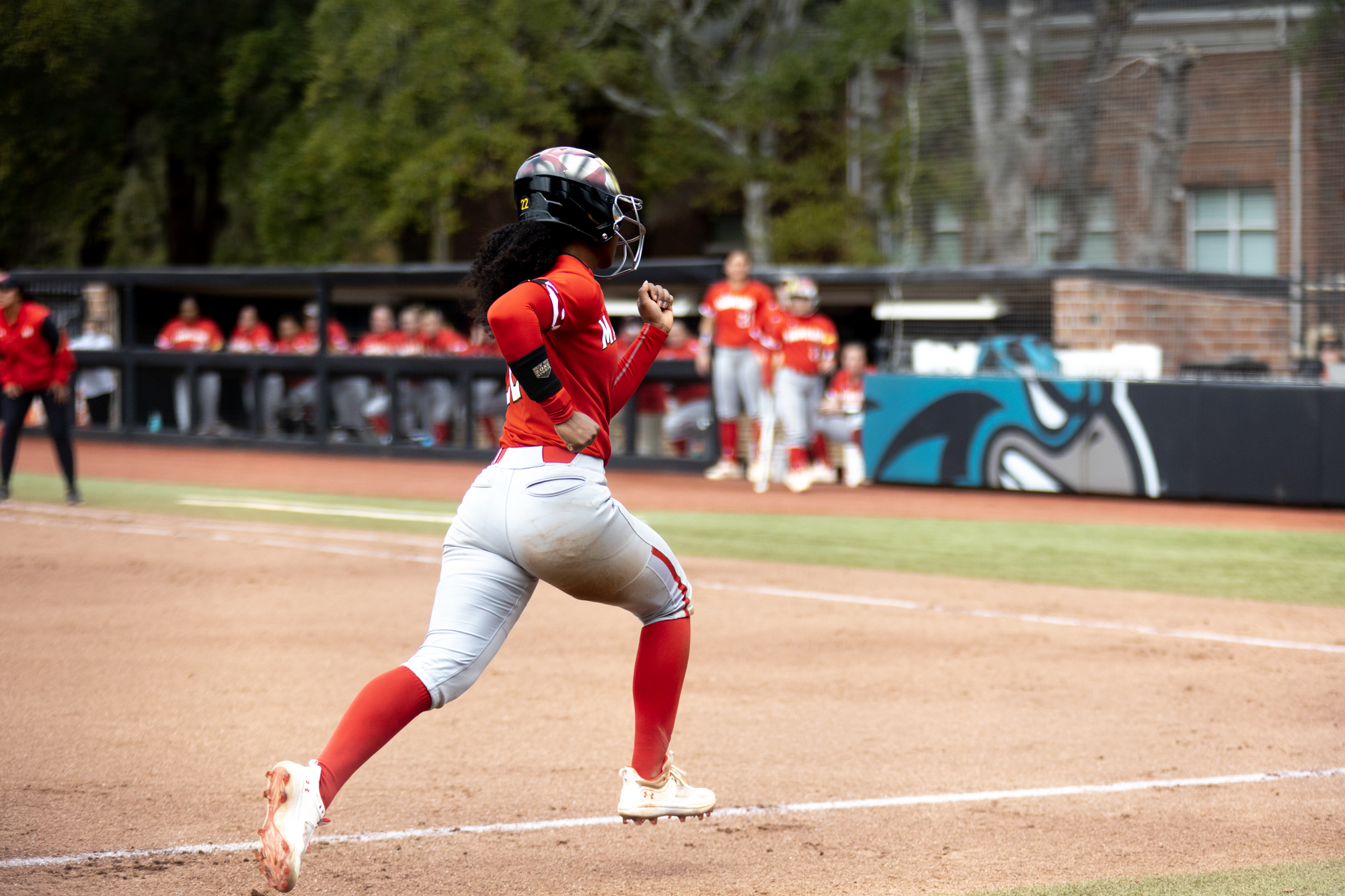 Maryland softball’s offense struggled to start its 2022 campaign. The Terps scored one or no runs in four of their first nine games.

Entering the Chanticleer Showdown last weekend, Maryland had only one home run and had the second worst slugging percentage out of all Big Ten schools.

The slow offensive start for the Terps was just that — a start. Coach Mark Montgomery’s squad scored at least five runs in four of its five games during its trip to Myrtle Beach, South Carolina. Not only was the offense more consistent, but it was more powerful as well.

“There’s been a whole lot of talk amongst the team, especially with coach in trusting the process. It was kind of our new theme this weekend and changing our mental standpoint,” said senior Mackense Greico.

After struggling to start her season, Greico torched the ball in South Carolina. Greico hit for a .500 (9-18) average. She crushed three homers and drove in eight runs. All three homers from Greico came in at-bats when she was ahead of the count, but her mindset at the plate isn’t always to wait out at-bats.

“[The mindset] kind of varies depending on the situation,” Greico said. “A lot of the time that you have somebody on, you’re looking to do a job, whereas if there’s nobody on and you have that opportunity to start something, it’s definitely more of a looking for something early in the count [situation].”

Last year, Jaeda McFarland led Maryland in hits, runs and extra-base hits and finished second in both home runs and batting average. This year, McFarland dealt with offensive woes at the plate to start the season.

In her first 17 at-bats, McFarland only had one hit. Since then, McFarland has recorded a hit in eight of her last nine games. Last weekend, McFarland improved her batting average by more than 50 points, now hitting over .300.

“In our comparable sport the professional level is Major League Baseball. Those guys, they’re going through where they’re batting five or six hundred for two or three weeks in a row, and then they have a week … where they don’t get a hit,” Montgomery said. “What happens is it averages out to three hundred or three fifty and that’s what you’re hoping for, getting back on.”

Michaela Jones has hit the ball well from the jump and her offense has continued to be a force for the Terps. Jones notched a hit in four of the five games in the Chanticleer Showdown and crushed her second home run of the season against Coastal Carolina. Among all Big Ten players, Jones ranks top-10 in batting average, on-base slugging percentage and slugging percentage.

While Ruby Butler didn’t put up the power numbers some of her teammates showcased, she still played a big role in Maryland’s offensive breakthrough. Butler recorded a hit in seven of her eight at-bats in South Carolina. Additionally, Butler stole four bases and scored five runs. She leads Maryland in average, on-base percentage and on-base plus slugging percentage.

The Terps registered 35 runs in the Chanticleer Showdown — just one less than they scored all season entering the invitational. Maryland’s lethal offensive weekend bumped them into the top five among Big Ten programs in runs, average and on-base percentage.

The Terps’ bats broke out in a big way this past weekend and they’ve won four consecutive games, pushing them two games above .500 at 8-6. According to Montgomery, that may be partly due to the level of competition faced.

“There’s 300 Division I softball teams and so far we’ve probably played two or three in the top-25, and we’ve played a lot more that are in the middle … part of the better performances are based on who you’re playing,” Montgomery said.

Maryland is set to play tougher opponents as the season goes on. The Terps’ offense will look to continue swinging the bat like they did in the Chanticleer Showdown.