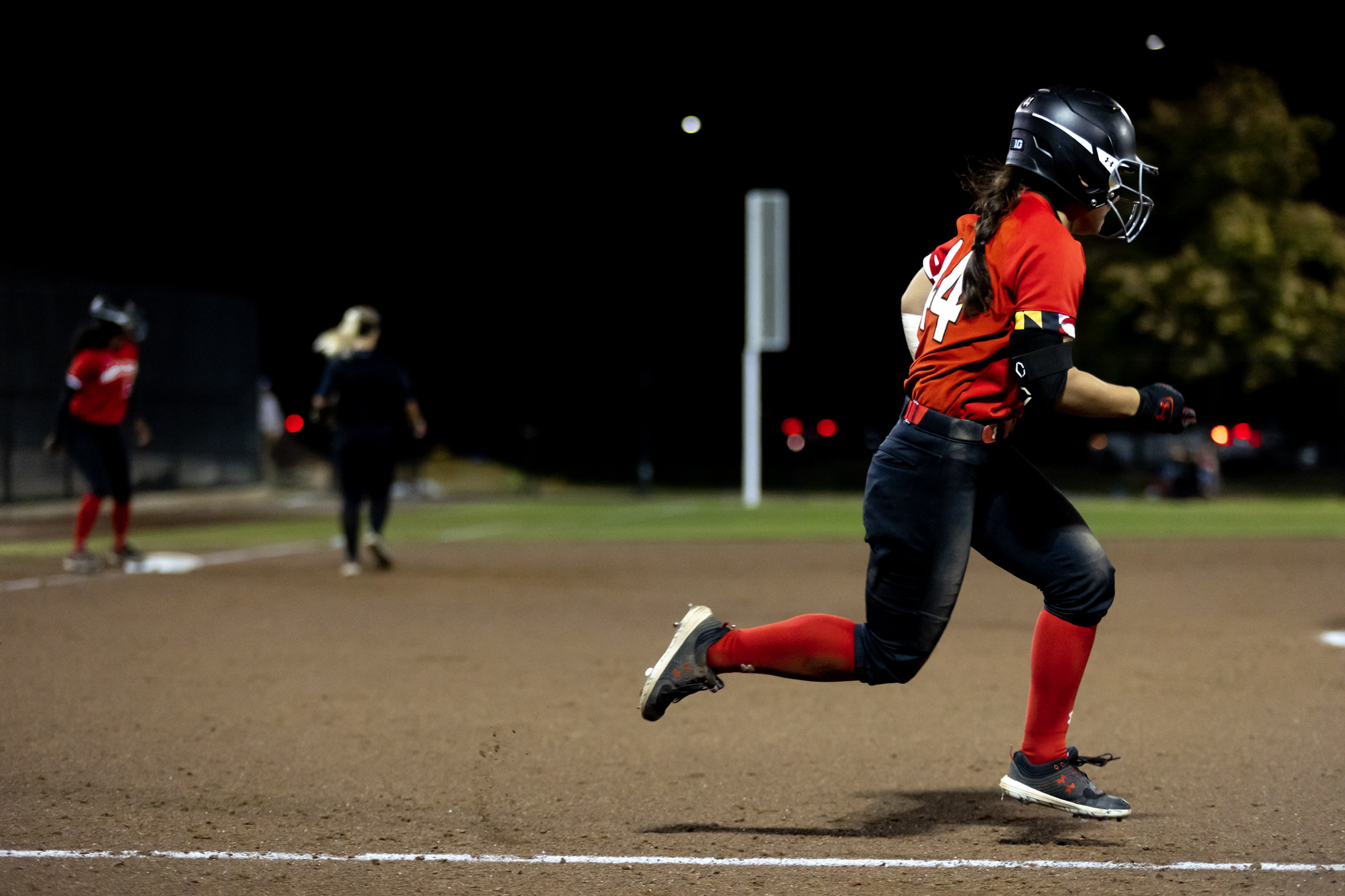 Maryland softball came to bat in the bottom of the seventh in a scoreless game, looking for the walkoff win.

Mackense Greico entered the batter’s box as a pinch hitter and reached second base on an error. Michaela Jones followed with a bunt to move Kamryn Davis to third, who pinch ran for Greico.

Taylor Liguori stepped up to the plate and won the game for the Terps with one swing of the bat. Ligouri singled to left field, scoring Davis as the winning run of the game.

Maryland softball battled with No. 17 Missouri Sunday afternoon and upset the Tigers in walk-off fashion, 1-0.

The game was dominated by pitching, as the first run of the game didn’t come until the seventh — and final — inning.

Maryland coach Mark Montgomery used a pitching carousel all throughout the game, using three different players on the mound. The Terps rotated between Trinity Schlotterbeck, Courtney Wyche, and Haley Ellefson, looking for the best matchup possible in each at bat.

“We have planned this style … the three headed monster. We just rotate pitchers in and it’s designed to take a team that’s a very good offensive team and keep them a little more at bay,” Montgomery said.

Through three innings, the strategy worked well for Maryland. Schlotterbeck, Wyche, and Ellefson only allowed three base runners as Missouri’s bats were held quiet the first time through the order.

Maryland’s bats also struggled early against Jordan Weber, the Tigers’ starter behind the rubber. No Terp recorded a hit and four different players struck out through three innings.

In the top of the fourth, Missouri threatened with two runners on and only one out.

Wyche came back onto the mound and got out of the inning without giving up a run. A huge strikeout on Kara Daly followed by a foul out to first thwarted the Tigers’ scoring opportunity.

Maryland went down in order in the bottom half of the inning, sending the game to the fifth, still scoreless.

A leadoff walk by Kimberly Wert in the top of the sixth gave the Tigers an opportunity to plate the first run of the game. Maddie Snider entered as a pinch runner for Wert and she attempted to steal.

However, Kiley Goff fired a strike from behind home plate to Ruby Butler at second before Snider could slide in safely, halting Missouri’s chance to score.

The Tigers responded with back-to-back walks, setting up another chance to score. Montgomery went back to Schlotterbeck on the mound to get the Terps out of the inning — and she did just that.

[Maryland softball drops doubleheader against No. 24 Liberty and Stetson]

With one out in the sixth, Jaeda McFarland swung at the first pitch she saw and singled to right center for Maryland’s first hit of the game. After Campbell Kline struck out swinging, Taylor Okada brought the count full and walked to put two runners on with two outs for Schlotterbeck at the plate.

The Tigers went with a pitching change, bringing in Megan Schumacher to face Schlotterbeck. Schumacher got the better of the at bat, forcing Schlotterbeck to ground out to third to end the inning.

Missouri had another opportunity to crack the scoreboard in the top of the seventh with two runners on and two outs. Wert came up to bat as a pinch hitter and was hit by the pitch, loading the bases for Alex Honnold.

Honnold hit a one hopper to second for the final out of the inning, ending the Tigers’ scoring threat.

Greico pinch hit for Ellefson to lead off the bottom of the seventh for Maryland. Greico reached on an error by Daly at third and advanced to second on the throw. Davis entered as a pinch runner for Greico, representing the winning run.

Jones bunted Davis to third for the first out of the inning and Liguori took over for Butler, looking to be the hero of the game.

Liguori drove home Davis on an RBI single, capping off the weekend for the Terps with a major upset-win.

After a rough start to the weekend, Maryland finished with back-to-back wins to move to 4-5 on the season.

“It was definitely not how we wanted to start but we really found our spark again. We found ways to be successful and we realized what we needed to do to win,” Schlotterbeck said