Maryland softball drops doubleheader against No. 24 Liberty and Stetson 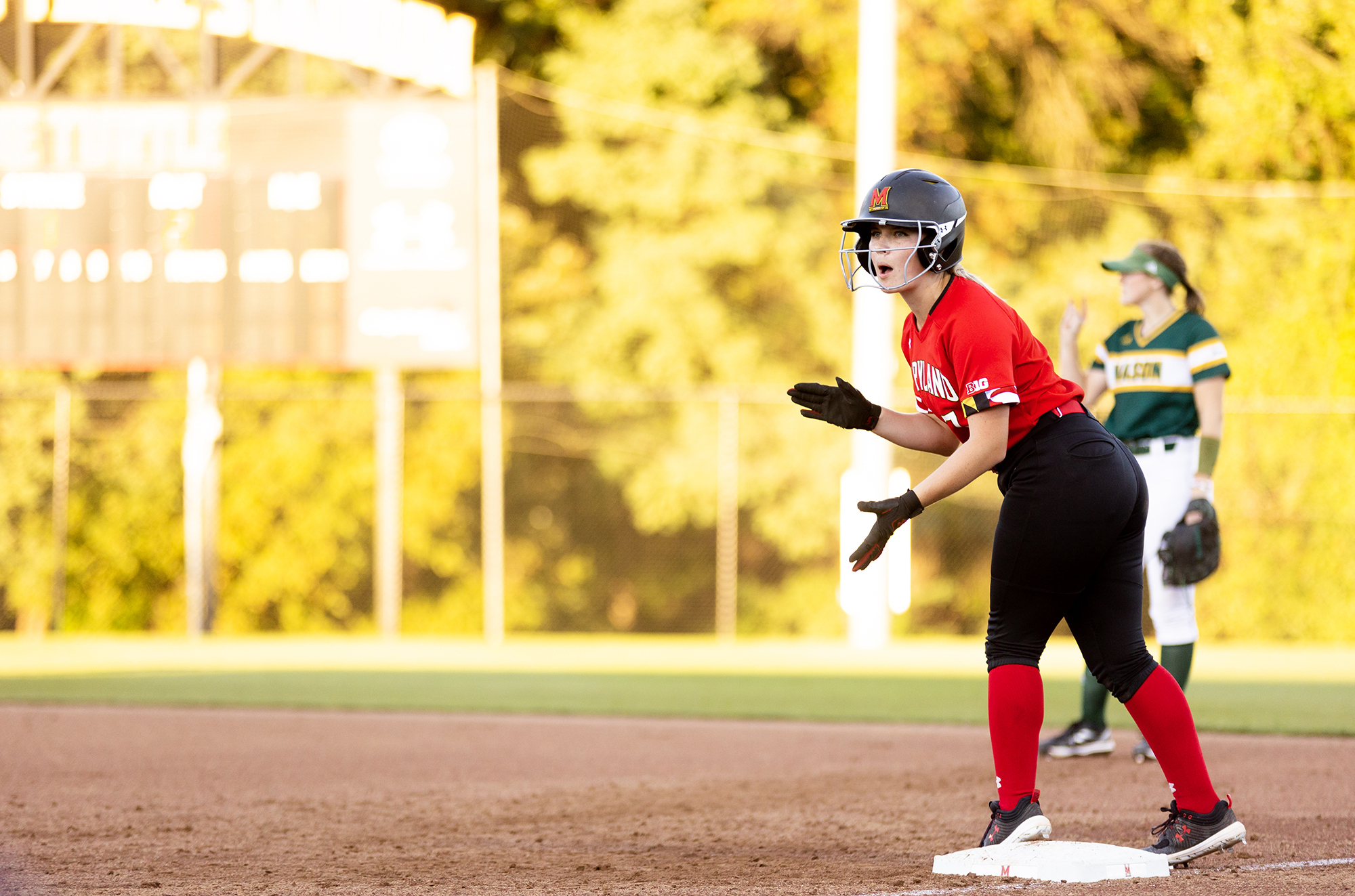 After Maryland softball tied its game with Stetson in the top of the sixth inning, the Hatters took the plate at the bottom of the inning looking to regain the lead.

Juls Schumacher led off the inning and did so with a bang. She crushed a home run, giving Stetson a 4-3 lead in the sixth frame.

The Hatters added insurance runs in the inning and closed the door in the top of the seventh to secure the win, 8-3.

Maryland lost both of its Friday doubleheader games. The Terps lost by mercy-rule to No. 24 Liberty, 9-0, and later fell to Stetson, 8-3.

In its first game of the day against Liberty, coach Mark Montgomery’s squad fell into a deficit early.

After being set down quickly in the top of the first, Courtney Wyche gave the Flames three runs in the bottom half of the inning.

With a runner on first and one out, Caroline Hudson reached base following a misplay in left field by Megan Mikami. Mikami’s error allowed Devyn Howard to score all the way from first, giving Liberty its first run of the game.

The next batter, Lou Allan, singled. After, a passed ball by Wyche gave Denay Griffin a golden opportunity to extend the Flames’ lead with runners on second and third and still only one out.

Another error, this time by Ruby Butler, allowed Griffin to reach base and Hudson to score from third. Karlie Keeney proceeded with a fielder’s choice, scoring Allan to add to Liberty’s lead.

All three runs given up by Wyche in the first were unearned.

In the bottom of the second, the Flames grew their lead even more.

With two outs in the inning, Allan stepped up to the plate with the bases loaded. Allan chopped one to short, but another Butler error allowed the inning to continue. Two Flames scored, upping Liberty’s lead to 5-0.

[‘We have a lot of potential’: Maryland softball hopes to improve in its second series]

Griffin then crushed the ball over the fence in straightaway center to bring home three more Flames runs. With the second inning not over, Liberty led big 8-0.

Wyche was removed from the game, unable to complete two full innings of work. While Wyche’s performance in the circle wasn’t her best, her defense certainly didn’t do her any favors. In just 1.2 innings pitched, Wyche gave up eight runs, three earned. Kyra Pittman came in to relieve her early in the game.

Liberty tacked on another run in the bottom of the fourth. With Kara Canetto on second base, Howard singled to right field. An overthrow in right by Amelia Lech allowed Canetto to cross home plate. Liberty had a 9-0 lead heading into the fifth frame.

Maryland went down in order in the top of the fifth. Liberty secured the 9-0 win by way of the mercy rule.

No Terp notched a hit, Wyche picked up the loss for Maryland, her first of the season and the loss to Liberty dropped Maryland back below .500, at 2-3.

In their second game of the day, the Terps looked to avoid playing from behind early.

Two singles, followed by a passed ball to open up the bottom of the first gave Stetson a golden chance to strike first. With runners on second and third and no outs, Maryland’s starting pitcher Trinity Schlotterbeck got out of the jam and held the game scoreless.

In the second inning, Schlotterbeck pitched herself into a jam again. But unlike the first frame, she was unable to leave unscathed.

Haley Fox stepped into the batter’s box for the Hatters with runners on second and third and two down in the inning. Fox singled into right field, scoring a pair to give Stetson a 2-0 lead.

Maryland had its best chance to score in the top of the fourth.

The Terps had two runners on base with no one out. Following a groundout off the bat of Campbell Kline, Michaela Jones knocked an RBI grounder to short, sending Regan Kerr home for Maryland’s first run of the game. Stetson’s lead was trimmed to one, 2-1.

Schlotterbeck gave up back-to-back singles to open up the bottom of the fourth that promptly sent her to the bench. Haley Ellefson relieved Schlotterbeck in a tough jam — the Hatters had runners on first and second with nobody out.

Ellefson induced a groundout, advancing the runners to second and third. A wild pitch from Ellefson scored Alyssa Gilman from third, plating the Hatters’ third run of the game.

In the top of the sixth, Maryland still trailed 3-1 — until Wyche stepped up to the plate with two runners on base.

Wyche drilled a triple into right field, scoring both Kline and Jones. Wyche tied the game at three apiece in the late innings, bringing momentum on the side of the Terps.

Maryland’s momentum was short lived, as Schumacher homered over the outfield wall to lead off the bottom of the sixth inning. After only one batter, Stetson regained its lead.

But the Hatters weren’t content with a single-run advantage.

With two runners on, Brianna Clary drove home a run following an error at short by Jones. Next up was Haley Fox, who singled in a run. Stetson’s next two batters both singled, scoring one more to grow the Hatters’ lead to four.

With Pittman now in the circle in a 7-3 game, the Hatters scored again off a fielder’s choice. Stetson put up five runs in the sixth frame, giving it a good cushion entering the top of the seventh.

The Hatters closed the door easily in the final inning, earning themselves a comfortable 8-3 victory over the Terps.