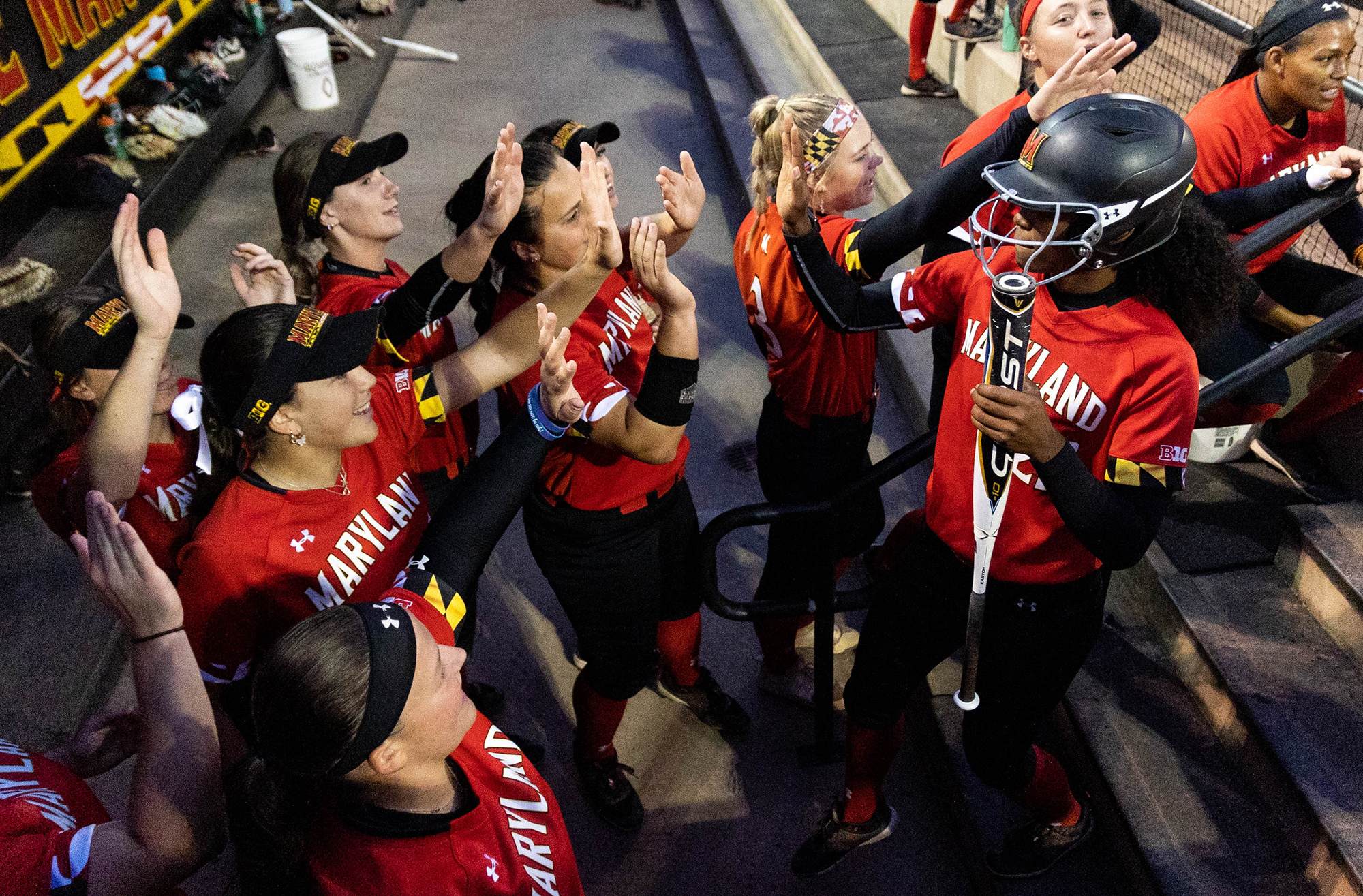 With five runs already scored in the first inning, Merissa Borkowski stepped up to the plate looking to drive home a sixth. Borkowski did just that, as she singled to drive in Ruby Butler from third.

The Terps put up six runs in the first inning. And they never looked back.

In its first game of the day against the Owls, the Terps had a golden opportunity to score the first run of the game early.

In the bottom of the second inning, the Terps had runners on second and third with no outs. Regan Kerr grounded the ball to third and poor Maryland baserunning induced a double play.

Campbell Kline was thrown out trying to go from third to home and Michaela Jones got caught in a rundown between second and third. Jones was tagged out and the Terps’ scoring chance was thwarted.

Florida Atlantic scored the first run of the game in the top of the third. With runners on the corners and two outs in the inning, the Owls attempted a double steal.

Kiley Goff’s throw to second shorthopped the base, allowing Sommer Baker to score from third and give the Florida Atlantic the lead, 1-0.

Both starting hurlers pitched well. After the Owls run in the third, neither offense threatened to score.

Maryland had runners on base as it had six hits through six innings, but Florida Atlantic’s Lynn Gardner made big pitches when she needed to to keep the Terps off the scoreboard.

[Maryland softball drops doubleheader against No. 24 Liberty and Stetson]

Down 1-0 entering the bottom of the seventh, Maryland needed a run to keep the game going.

The Terps were unable to score and lost their first game of the day to the Owls.

Trinity Schlotterbeck pitched all seven innings for Maryland but ended up with another tick in the loss column. Schlotterbeck only gave up two hits, three walks, and just the one run. Despite having an ERA under 2.00 through four games and striking out four batters, the loss to Florida Atlantic drops her record to 1-3.

In the Terps’ second game of the day, they had an early scoring opportunity.

In the bottom of the first inning, Jaeda McFarland led off with a triple to center field. Kline followed with an infield single to the pitcher, then an RBI fielder’s choice off the bat of Taylor Okada drove home McFarland.

Due up next was Courtney Wyche, the starting pitcher of game two. Wyche helped herself out at the plate, drilling one to left center for an RBI double, upping Maryland’s lead to 2-0 in the first.

Still in the first, an error by the Wildcats allowed Mackense Greico to reach base and Kamryn Davis, who pinch ran for Wyche, to score from second.

Later in the inning, Butler came up to bat with runners on second and third. Butler singled, and a wild throw by Bethune-Cookman allowed both runners to score and Butler to advance to third. Borkowski followed Butler with an RBI single, giving Maryland a 6-0 lead.

[‘We have a lot of potential’: Maryland softball hopes to improve in its second series]

In the second frame, the Terps had another scoring chance with runners on the corner and two outs. Kline showed off her speed as she stole home from third, adding another run to Maryland’s large lead.

Bethune-Cookman had a chance to join Maryland on the scoreboard in the top of the third.

The Wildcats loaded the bases with one out for Shania Owens, but Owens struck out looking for the second out of the inning. The next batter, Julissa Gomez, grounded out to second, but not before Wyche threw a wild pitch that allowed Elise Gibbs to score from third, putting a dent in Maryland’s lead.

But the Terps got more than just that run back the following inning.

McFarland doubled with two runners on base, scoring both Goff and Borkowski. Later in the inning, McFarland used her speed to her advantage as she stole home for Maryland’s tenth run of the game.

Amelia Lech brought home another run in the inning on an RBI flyout. The Terps scored four runs in the third, giving them a ten run cushion entering the fourth.

Kyra Pittman entered in the fifth, looking to close the game. Pittman gave up two runs, but did her job as Maryland defeated Bethune-Cookman by way of the mercy rule.