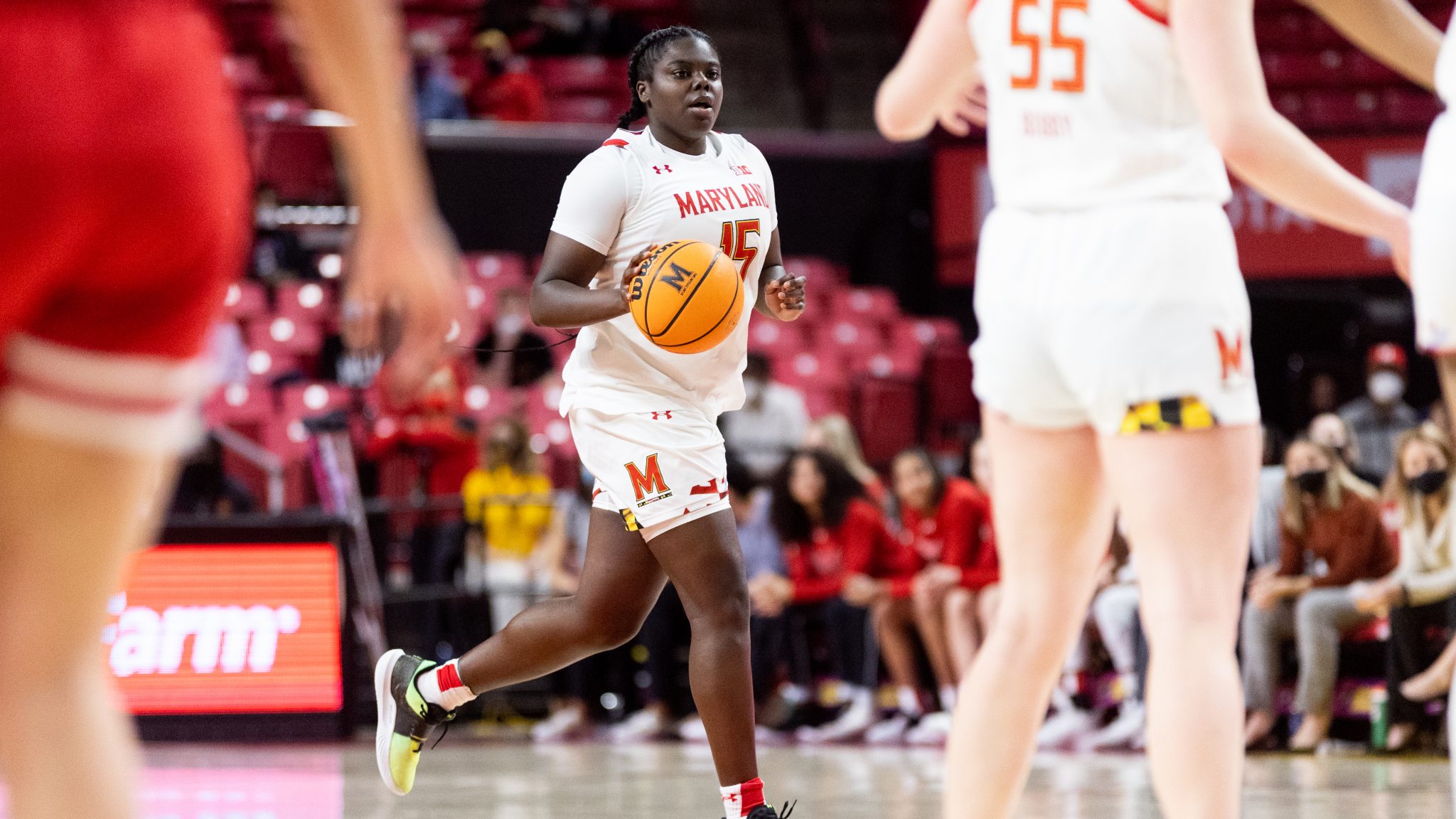 Maryland women’s basketball lacked some hustle — particularly on the glass  against an upset-minded Rutgers team seeking its first win in conference play.

Needing a spark, the offensive innovation from Angel Reese set forth a crucial third-quarter run for the Terps. Despite missing two free throws with just over six minutes remaining, the following possession saw Reese collect her fifth offensive rebound of the quarter.

She found a cutting Chloe Bibby with her back to the basket, opening up the floodgates as Maryland embarked on a 10-0 run. The following possession saw Bibby replicate Reese’s passing from down low, this time to a slashing Ashley Owusu.

More offensive rebounds gave way to the sharpshooting Katie Benzan, who nailed back-to-back threes to take a 51-38 lead. In what was once a gritty back and forth affair turned into a comfortable margin for the Terps as they emerged from its two-game homestand with a 2-0 record.

Bibby led the way with 22 points on her bobblehead night, while Reese collected her 11th double-double of the season in a 72-55 victory.

“My teammates were finding me when I was open,” Bibby said. “Our defense led to our offense and that’s what we’ve been working on in practice so it was great to see that translate today.”

The offense was firing on all cylinders in the opening quarter. Owusu continued her hot stretch from downtown to double Rutgers’s scoring output before a picturesque fast break opportunity cemented the impressive start.

A kick out to Benzan drew out Sayawni Lassiter, leaving Shyanne Sellers open for a three. But defensive help was a step too late, allowing Sellers to swing it to a wide open Mimi Collins for the mid-range jumper to put the Terps up, 16-7.

Rutgers connected on just four of its 17 attempts in the quarter, but the ability to wind down the shot clock hindered Maryland’s transition game, allowing for a manageable deficit heading into the second quarter.

It was a slower start for the Terps after the break as the Scarlet Knights jumped out on a 6-2 run to start the quarter. Diamond Miller was able to nail a three out of a Maryland timeout, but general sloppiness on offense led to multiple chances for Rutgers.

While Rutgers led the way with 12 turnovers after 17 minutes of action, the Terps had coughed up nine of its own to keep the Scarlet Knights within striking distance. The teams combined for 24 in the opening half.

Further complications on the offensive end — namely a 29.4 field goal percentage for the quarter — limited Maryland to just a four-point lead heading into halftime.

“You see that in conference now, whether you’re the top of the league or the bottom of the league, these teams are going to compete and come after you for 40 minutes,” coach Brenda Frese said.

While the offense failed to replicate its first quarter performance, the glaring hindrance for the Terps came on the glass as they yielded eight offensive rebounds to go with a -5 first-half margin on the boards.

“As it got brought to our attention, I thought it got better and that’s an area we’ve got to get [everyone involved in] and not assume [Angel] is going to get everything,” Frese said. “The response was terrific and they took it to heart.”

Frese made it a point of emphasis pregame to stifle Rutgers on the glass. Thus far, that premonition fell short of expectations, but Maryland was not going to let the Scarlet Knights’ edge on the boards dictate the flow of the game.

A cross court pass from Miller to Owusu served up an opening possession three for the Terps. The smooth stroke of Owusu has always been heralded as an off-the-dribble mid-range specialist, but the senior has been dialed in of late on catch and shoot opportunities, drilling five threes in the past two outings.

“My three-point shot was something I worked on a lot this summer,” Owusu said. “So just trusting myself when I shoot it and also trusting that my teammates are gonna find me at the right time.”

Despite Owusu’s three kicking off a 5-0 start to the third quarter. Rutgers quickly flipped the script in its favor, going on a 10-2 run to cut the deficit to one point with 6:59 remaining in the quarter.

Just as the six-minute mark passed, however, Maryland notched it up a gear. Starting with a dish by Reese from the post to a cutting Bibby, the Terps took launch.

Back-to-back three pointers by Benzan gave Maryland a 13-point lead, its largest of the game. The third quarter ended with a 4-4 split, but the benchmark had been set.

“Loved our response coming out in the third quarter,” Frese said. “Second half [we] started playing Maryland basketball, moving the ball and being really really unselfish.”

Bibby started the fourth quarter with back-to-back threes of her own as the Terps continued to build their lead. The second half was all Maryland as it outscored the Scarlet Knights, 42-29, down the stretch to put the game away.