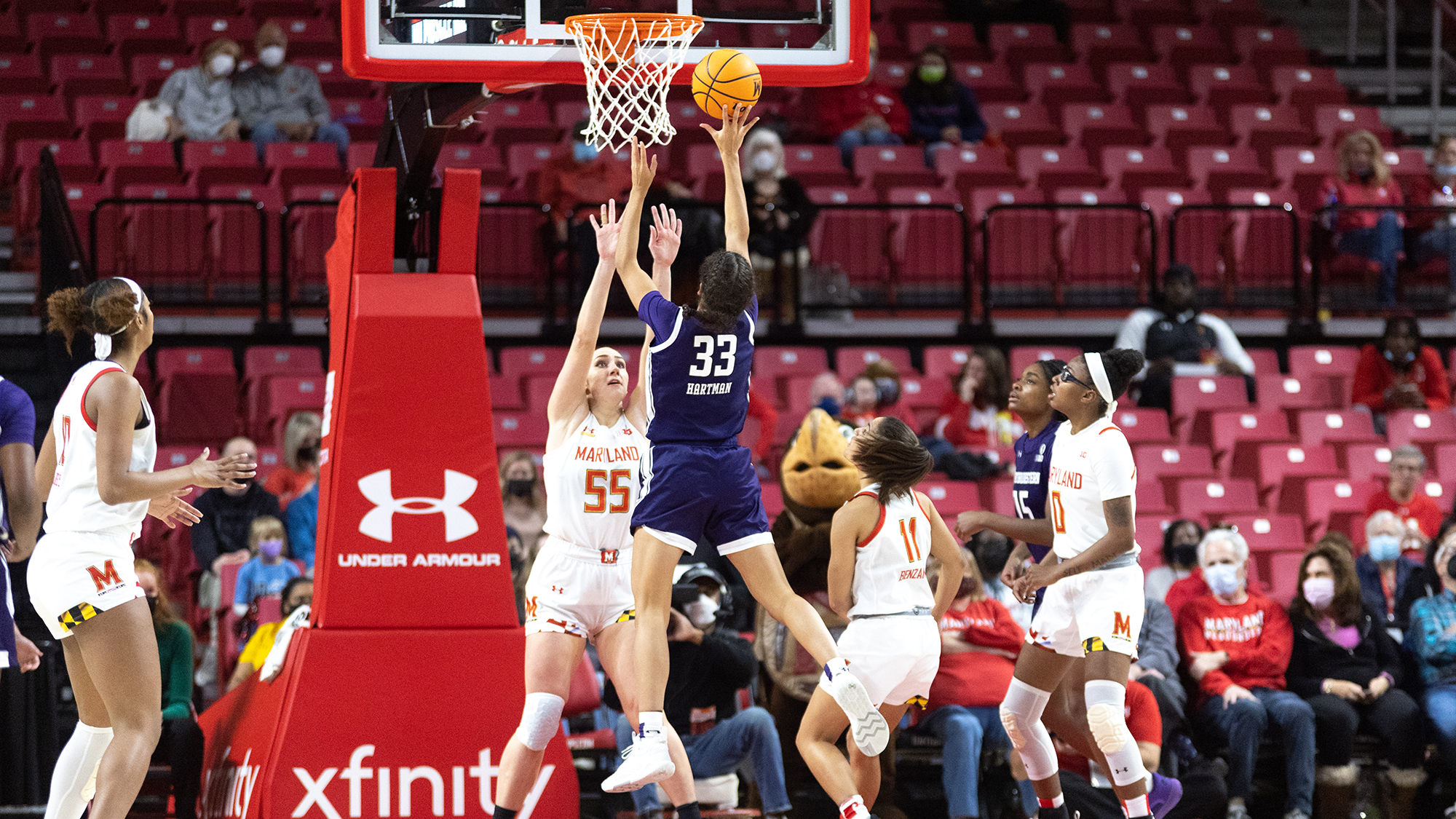 In its two-game skid against Michigan and Ohio State, Maryland women’s basketball found itself on the wrong side of the longball: giving up a plethora of three-pointers.

Again and again, these players found themselves with enough space to get off clean shots. They burned a Terps defense that consistently lost track of shooters to disastrous consequences.

After facing Ohio State and Michigan, the No. 1 and No. 7 ranked Big Ten teams in three-point percentage, respectively, Maryland received an opportunity to put the defensive lessons they learned from those losses against a less explosive Northwestern squad. The Wildcats rank No. 13 in the Big Ten in three-point shooting at 30.4 percent, and the Terps capitalized on their shooting woes. They forced Northwestern into a dismal 5-of-20 performance from behind the arc.

“Big emphasis. It’s an area that we have to improve defensively,” coach Brenda Frese said about her team’s three-point defense. “ A credit to the team, I thought they did a great job really locking in.”

Even Northwestern’s best shooters struggled. Laya Hartman leads the team in three-point percentage at a scorching 45.2 percent clip, and Veronica Burton shoots threes at the highest volume for the Wildcats, making a solid 34.2 percent of her outside shots. Combined, those two players went 3-of-11 from deep.

[After early retirement, Zoe Young still has a voice in Maryland women’s basketball]

The Terps played their “one” look on defense, a matchup 1-2-2 zone defense that packs the paint and prevents inside shots. While the scheme doesn’t concede outside shots to the offense, it does, at times, invite the offense to step into seemingly open shots that become semi-contested ones quickly.

“We were definitely baiting them to shoot, and they were struggling a little bit from the three-point line,” Shyanne Sellers said. “Now we’re not trying to give them free shots but definitely daring them to take [threes] rather than driving.”

Burton took a catch-and-shoot three-pointer early in the second quarter. She was open, but she was well behind the three-point arc at the top of the key. Sellers jumped up and out, moving forward toward Burton to contest the attempt, which rang off the back of the rim and into a Maryland defender’s arms.

Northwestern coach Joe McKeown felt that his team mostly took the right shots at the time but rushed some threes when better shots were available.

“You got to make them if you’re going to beat Maryland,” McKeown said.

Frese said her team hasn’t played as much of that 1-2-2 zone as they did against Northwestern, and that the Terps did a good job rotating and covering for each other as one cohesive unit.

The team’s practices after the losses to Michigan and Ohio State were filled with discussions about their defense as a whole and their perimeter game. The team talked to resolve issues and to stay on the same page before they stepped on the court for live action.

“It’s just moreso talking to people, telling people where to be and finding a box out when the shot goes up,” Sellers said. “In a zone it’s all about team effort and team communication.”