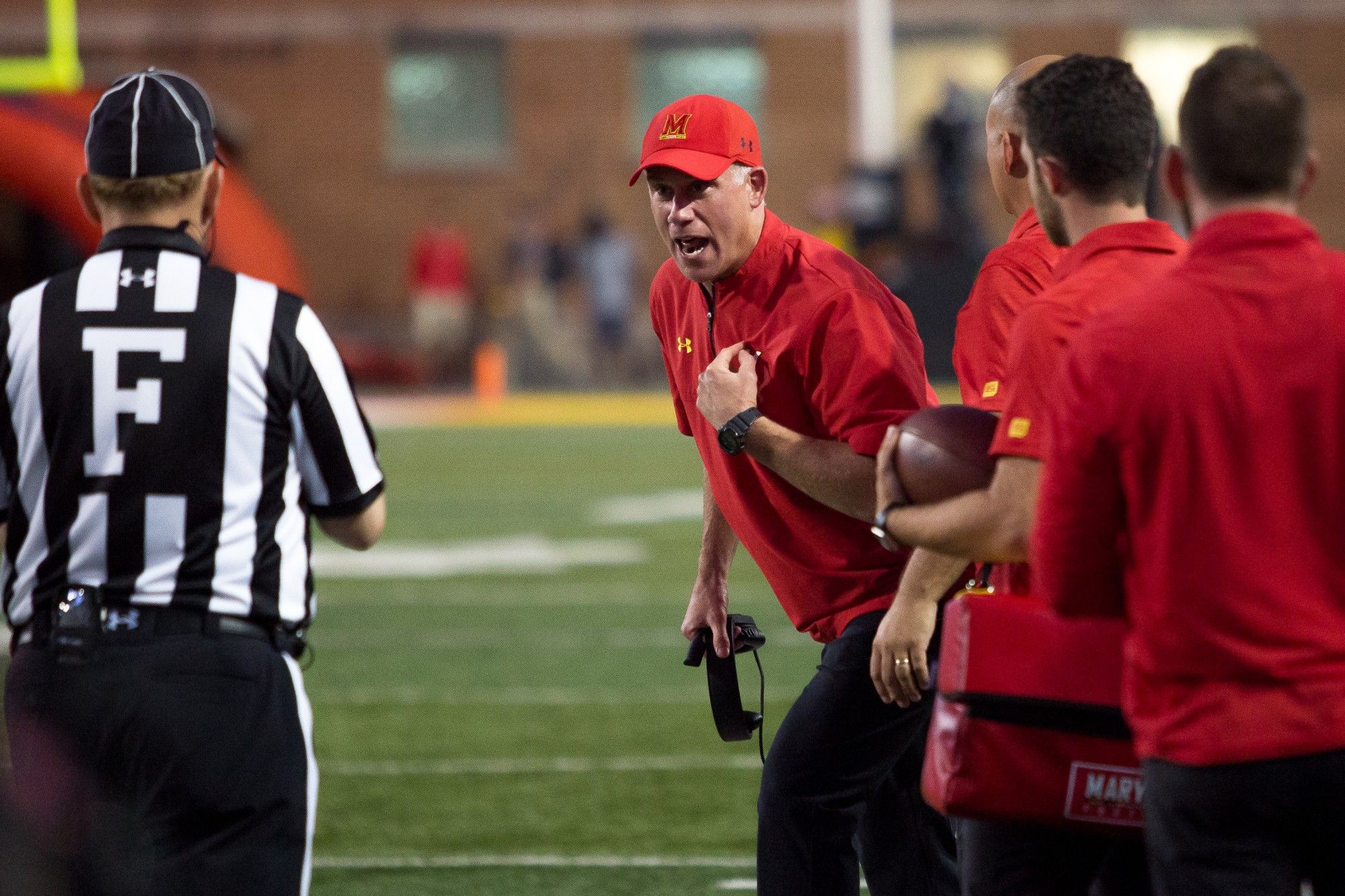 Head coach DJ Durkin speaks with a referree after a flag is thrown in Maryland’s 37-21 loss against Northwestern University on Oct. 14, 2017. (Marquise McKine/The Diamondback)

E.J. Donahue and Gus Little filed a lawsuit in August 2019 against the university, former football coach DJ Durkin and other officials. The lawsuit followed the death of Jordan McNair, a former football player who died of heatstroke in 2018.

The other officials named in the lawsuit include Rick Court, the former strength and conditioning coach under Durkin, and Wes Robinson, the former head football athletic trainer. The university fired Durkin, Court and Robinson in the months following McNair’s death.

The university and other defendants denied any wrongdoing, according to settlement documents provided by Malcolm Ruff, a Baltimore-based lawyer representing the former players.

An athletic department spokesperson declined to comment on the settlement.

Ruff said the lawsuit “was a major milestone for student athletes and their ability to stand up for themselves.”

The university launched an independent investigation into the culture of the football program after McNair’s death. Over the course of the investigation, eight investigators spoke with 165 people — including college athletes, parents and members of the athletic department — before releasing a 192-page report.

The investigation concluded the football program was abusive and evaded accountability but stopped short of referring to the culture as “toxic.”

Donahue and Little were both referred to by name in the report.

Donahue, a former offensive lineman, said he experienced anxiety and depression due to bullying from the football staff, according to the report. He sought counseling as a result, per the report.

Donahue told investigators that Court humiliated players about their weight and described his time playing under Durkin as “the worst year of [his] life,” according to the report. Donahue later transferred from this university.

Little, a former inside linebacker, told investigators that football trainers became angry at him for seeking medical treatment outside of the program for an injury that took place off-campus. He also recalled a time when Court called him a “pussy bitch” while he was undergoing IV treatment after he sustained full body cramping.

Court denied addressing a player who was receiving medical treatment in this manner, according to the report.

Donahue and Little both alleged that Court had shoved a player against a refrigerator and forced him to clean up his vomit from a trash can.

Durkin is now the co-defensive coordinator at the University of Mississippi. In June, Court was hired as an athletic strength and conditioning coordinator in Michigan.

The family of Jordan McNair reached a $3.5 million settlement earlier this year.

Ruff said the lawsuit was an “empowering experience” for Donahue and Little.

“To see the change from being completely powerless … to being able to stand up to the university,” Ruff said. “I think it’s justice for them, it’s a victory for student athletes.”