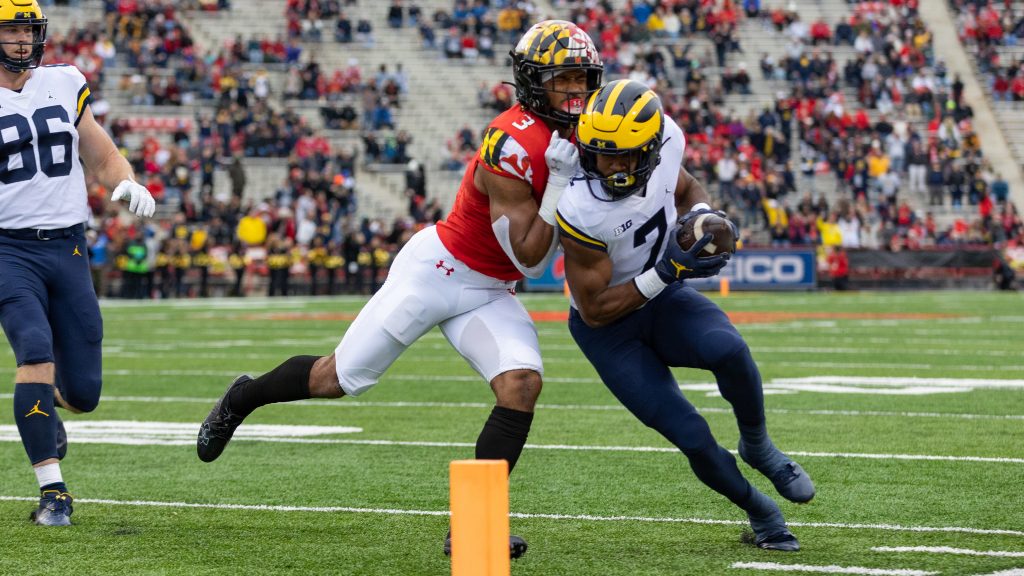 Nick Cross attempts to tackle Donovan Edwards out of bounds during Maryland football's 59-18 loss to No. 8 Michigan on Nov. 20, 2021. (Cam Andrews/The Diamondback)

Even with No. 8 Michigan running over Maryland football, Carlos Carriere found reason to celebrate. On senior day, the veteran Terp hauled in a seven-yard touchdown, his sixth career score.

It was small consolation for an otherwise forgettable game. Maryland would have liked to send its seniors off right at home, but the Wolverines spoiled those plans with a 59-18 blowout win over the Terps.

“Disappointed for our 25 seniors that we honored today that we weren’t able to play better for those guys,” coach Mike Locksley said.

Prior to the game, Maryland honored Jordan McNair with the rest of its senior class. McNair, whose death in 2018 spurred an investigation into the program and coaching changes, would have taken the field Saturday with his Terps teammates for one final time at Maryland Stadium.

Instead, his senior brethren carried his memory into the contest.

Carriere has quietly become a reliable option for quarterback Taulia Tagovailoa as receiver after receiver has gone down. Brian Cobbs and Darryl Jones fit the same mold, understated but steady veteran pass-catchers to complement the team’s more explosive wideouts. Carriere led the Terps with 53 receiving yards, Cobbs had 39 yards and Jones caught one pass for 24 yards.

A couple defensive seniors made notable plays, too. Sam Okuayinonu tripped up Hassan Haskins on third down, which led to a fourth-down stand, while Jakorian Bennett forced a three-and-out on the game’s opening drive with a pass breakup.

But those efforts were not enough, as Maryland (5-6, 2-6 Big Ten) allowed 59 points and once again gave another maddeningly mediocre performance against a top-10 team.

“I wanted to get this done for our seniors,” linebacker Ruben Hyppolite said. “I feel for them.”

Tagovailoa delivered one of his tamer performances of the season, passing for 178 yards and rushing for 30 more. Despite breaking the program’s single-season completions record, he missed high on several throws, including on a third-quarter pick-six and to a wide-open Corey Dyches in the end zone as the Terps threatened for a touchdown.

That latter series also broke down on a spate of penalties. Maryland committed three infractions — a false start, an illegal shift and a chop block — all inside the 10-yard line, making its path to six points that much harder.

The penalties were also costly on defense. Nick Cross’ hold nullified senior Jordan Mosley’s interception, and Haskins found the end zone for Michigan (10-1, 7-1) on the next play.

“We got outcoached and outplayed,” Locksley said. “We got to flush this one pretty quickly.”

The night turned more sour for one senior, when nose tackle Ami Finau limped off the field in the third quarter and did not return.

All that meant a disappointing day, as Maryland could not honor its seniors with a win and a trip to a bowl game. The Terps are now down to their last chance to extend their season and give their seniors the postseason experience they’ve yet to have.

But for a brief moment, Carriere’s touchdown allowed for a smile. Amid the blowout and a dwindling home crowd, at least one senior had his night to shine.

“Cool moment to probably look back on later on down the road,” Carriere said. “But right now, the focus is just getting that sixth win. That’s really all I want.”