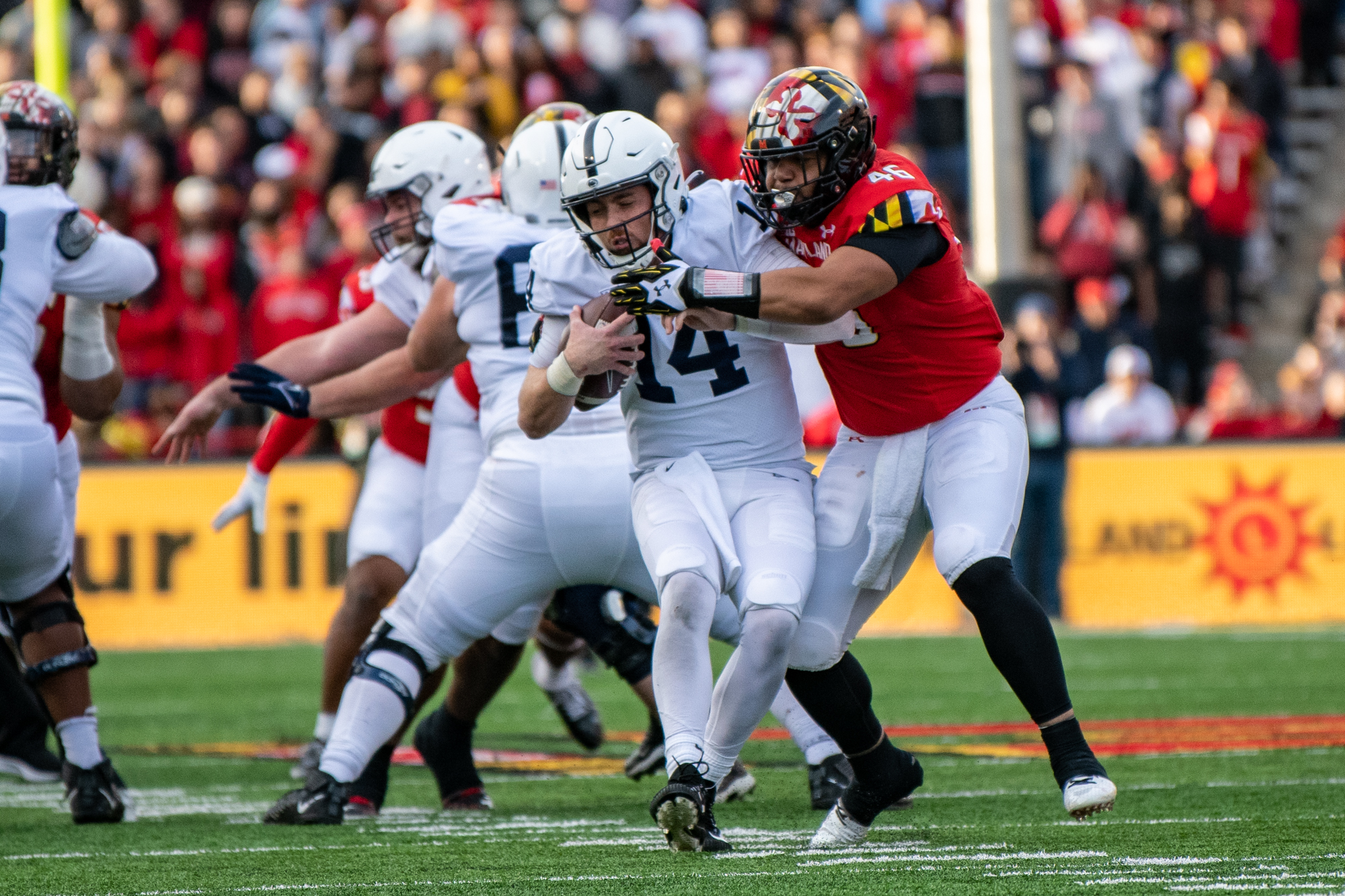 Sitting at a one score deficit, Greg Rose brushed right past his defender on the way to putting Penn State quarterback Sean Clifford on the ground for a sack.

As one of Maryland football’s most surprising stars got to add another sack to his season, the Terps were enjoying one of their best defensive performances to date.

But the next play was written in the stars throughout Maryland’s 31-14 loss to the No. 22 Nittany Lions.

The Terps’ defense was hot and cold against the Nittany Lions, pressuring Clifford and keeping a hold on their running backs, while showing an inability to get off the field on third down.

It was a combination that left Maryland with a loss and another game closer to missing out on bowl eligibility.

“I don’t think it was anything that’s not fixable,” defensive back Jordan Mosley said. “A lot of it was self-inflicted wounds.”

The biggest issue for the Terps, aside from Dotson racking up 242 receiving yards and three touchdowns, was converting on third downs.

Maryland did well throughout the game in getting Penn State to third downs, forcing 18 of them — the most this season.

But when it came to stopping the Nittany Lions, the Terps showed weakness. Penn State converted 10 times, averaging a gain of 7.2 yards on third downs.

The Nittany Lions averaged a third down to-go distance of 8.2 yards. Yet when it came to halting their momentum, Maryland often had little answer.

Despite the poor results on third down, the Terps owed much of their early success to the efforts of the interior defensive line.

Locksley has praised the unit for weeks, and against Penn State, they earned every bit of it.

“Our interior [defensive] lineman, those guys play really hard,” Locksley said. “Those guys are playing winning football for us.”

Rose registered another sack later that, at the time, seemed like a major swing for Maryland.

The Terps had just leveled the game at 14 after quarterback Taulia Tagovailoa connected with tight end Chig Okonkwo for a two-point conversion. But one play later, Dotson flew across the field and into the end zone for an 86-yard touchdown.

Defense has not been a point of pride for Maryland this year, ranking toward the bottom of the Big Ten in just about every statistical category.

But against Penn State, they were the ones who gave the Terps a fighting shot after a slow start from their offense, which punted on their first five possessions.

“Defense gave us a chance,” Tagovailoa said. “They gave us a lot of opportunities.”

Mosiah Nasili-Kite was a force for Maryland, finding six tackles through the night, two of which were for losses.

And after being dispatched by a vicious run game two weeks ago at Minnesota, they kept the Nittany Lions to just 2.8 yards per rushing attempt.

The rest of the defensive line provided sparks as well. Tyler Baylor got his first career sack in the second quarter, which eventually led to a third-and-seven.

Penn State converted that one, too.

The Nittany Lions beat the Terps on third down through the air, passing on 16-of-18 attempts and completing nine of those tries for 119 yards.

Locksley said that the team necessitates getting the groups outside that strong interior line to produce in a similar manner.

“You see people in the third down situations, we’ve gotta get these other guys playing to the level that they’re capable of playing,” Locksley said.

Much like the game through the first three quarters, it was a back-and-forth performance from the defense. At points, it seemed the defense could’ve been the unit to pull out a victory. But the consistency still wasn’t there.

The defensive highlights ended up serving as more of a nice addition to a statistics page or possibly even a place to grow from over the final few weeks.

But it didn’t bring Maryland the result it was hungry for against a rival.

“A loss is still a loss,” Mosley said.