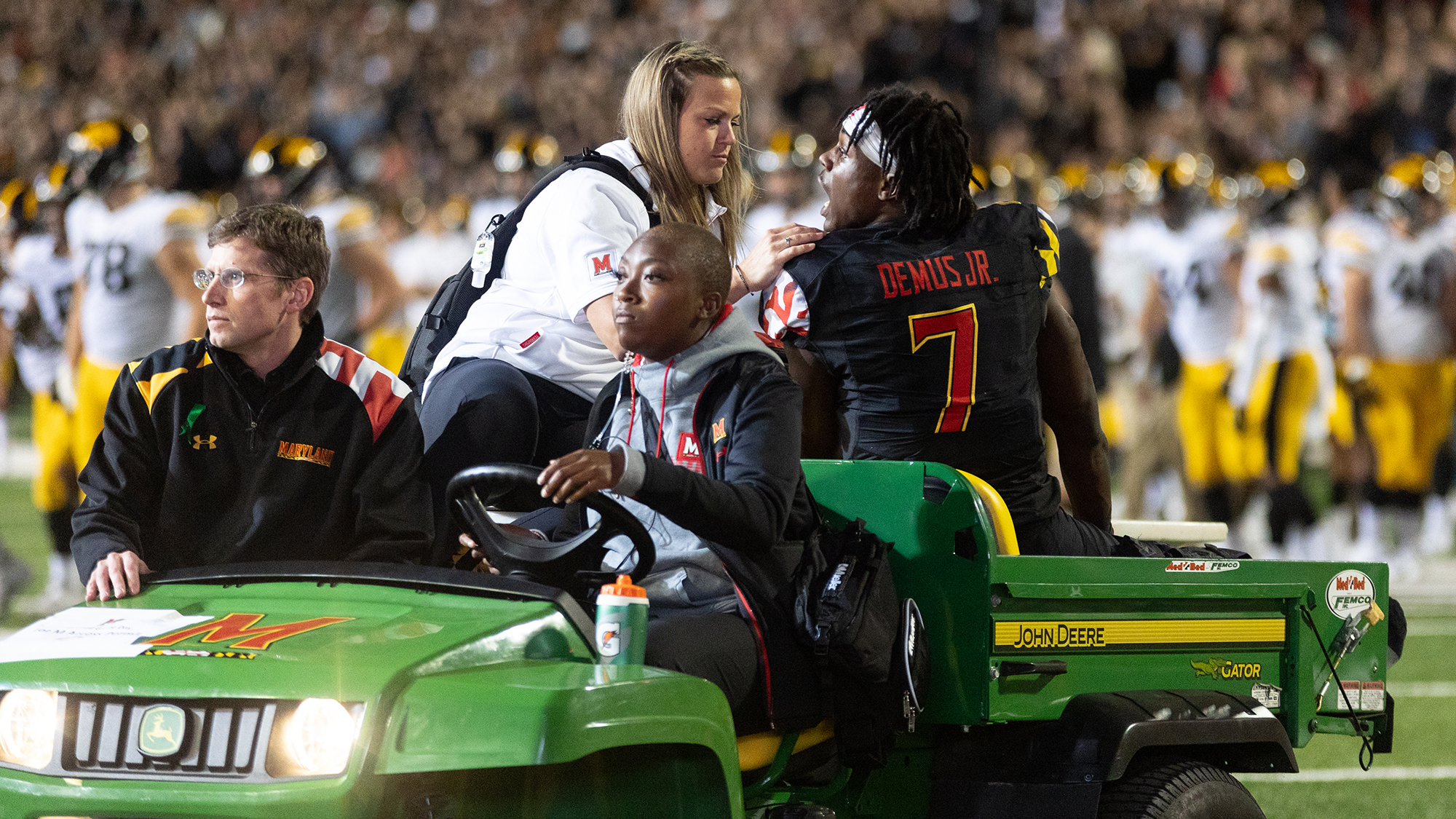 Dontay Demus yells to his bench as he’s carted off the field during Maryland football’s 51-14 loss to No. 5 Iowa on Oct. 1, 2021. Demus suffered a season-ending knee injury. (Julia Nikhinson/The Diamondback)

Maryland football took a massive blow in the second quarter of its 51-14 loss to Iowa when wide receiver Dontay Demus left the game due to a knee injury following a kickoff return.

He could be seen yelling to his teammates “I’m coming back” as he was carted off the field.

But now, coach Mike Locksley has confirmed Demus — the team’s top receiver for three straight seasons — will miss the remainder of the 2021 campaign, requiring surgery on his right knee.

“Very devastating for a player that I felt was playing at a very high level,” Locksley said. “I’m sure Dontay will do everything he can, as he said going up into the tunnel, to come back, whether it’s here at Maryland or hopefully at the next level.”

Demus has been an integral part of the Terps’ campaign, notching a team-high 507 yards and three touchdowns in the first five games of the year.

[Against No. 5 Iowa, Maryland football continued its big-game blunders]

The Washington, D.C., native was averaging 18.1 yards per reception, almost five more yards per catch than anyone else on the team. At 6-foot-4 and 215 pounds, Demus was a significant issue for opposing secondaries and will be a sure-fire player at the next level.

Before getting injured, Demus’ strong start moved him up to eighth on Maryland’s all-time receiving list. He passed Marcus Badgett in the first quarter of Friday’s blowout, with 1,740 yards. He also reached sixth on the all-time receiving touchdowns list, sitting one away from Stefon Diggs.

When the Terps take the field Saturday against Ohio State, it will be an unfamiliar sight to not have No. 7 amongst the fray. Demus had caught at least one pass in 27 consecutive games, dating back to Oct. 27, 2018.

Despite the huge loss, Maryland has no shortage of quality receivers. Players such as Rakim Jarrett, Jeshaun Jones and Darryl Jones will have to carry the Terps’ dynamic receiving room for the foreseeable future.

Since the NCAA is allowing any athlete who played during the 2020-21 season an additional year of eligibility, Demus would be able to return for one more season at Maryland. However, his already-impressive track record could easily find him a spot in the NFL as soon as 2022.