Against No. 5 Iowa, Maryland football continued its big-game blunders 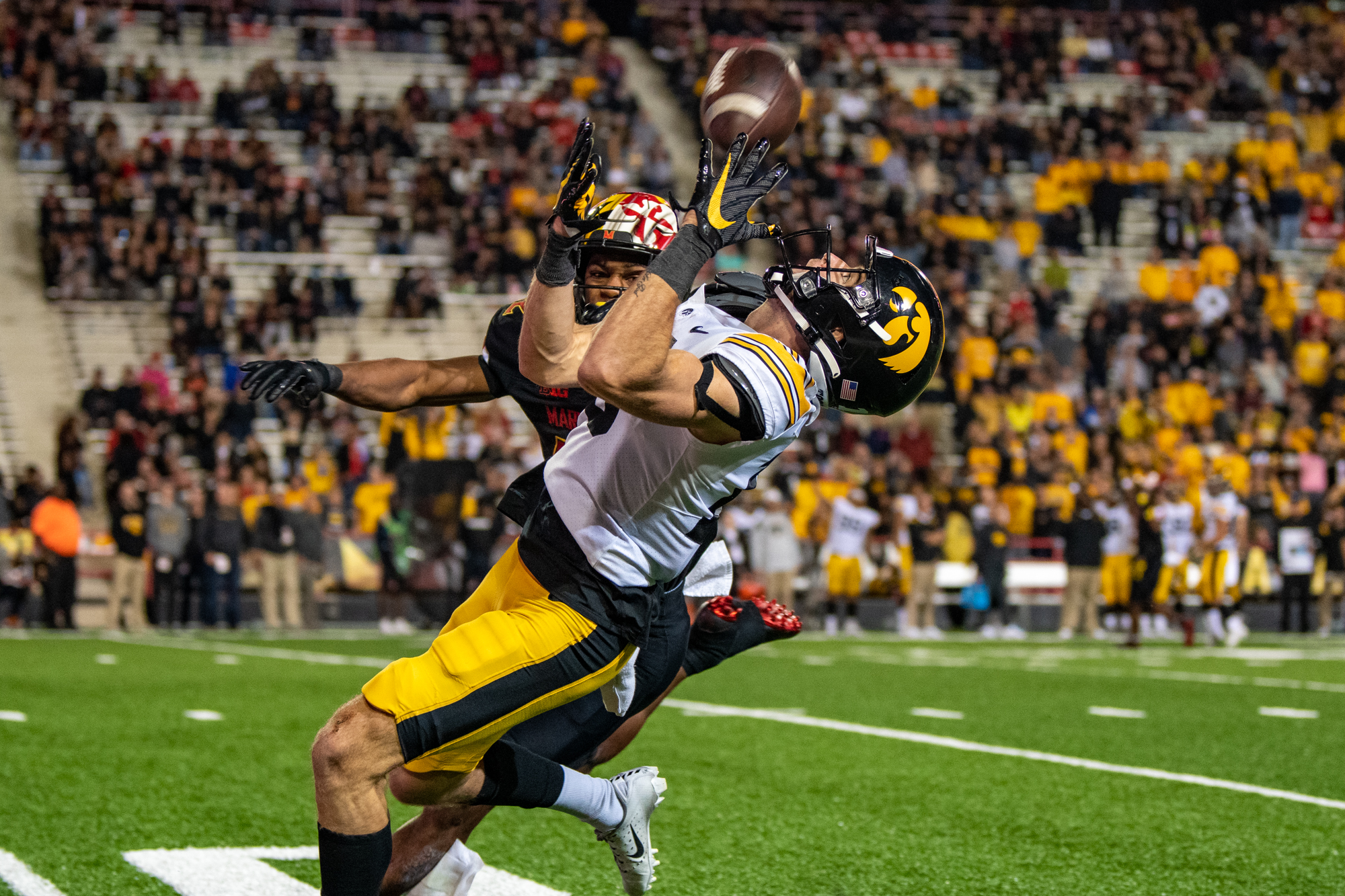 An Iowa receiver hauls in a catch over a Maryland defender in the Hawkeyes' 51-14 win over the Terps on Oct. 1, 2021. (Joe Ryan/The Diamondback)

Stop me if you’ve heard this one before.

Maryland football enters a matchup against a top-tier opponent taking place at home on a Friday night, where the team has scheduled a blackout game and has hyped it as a turning point of the program.

All that only for the Terps to suffer an agonizing defeat.

As the first half drew to a close and Maryland sat in a desolate 34-7 deficit to No. 5 Iowa, you could sense the déjà vu from a mile away.

And the Terps certainly didn’t rise to the occasion when the Hawkeyes came to College Park, reminiscent to most Maryland fans of 2019’s 59-0 loss to Penn State.

The Terps held tough for the first quarter, leaving the period with a lead. What followed was an absolute collapse in the second quarter in the form of 31 points by Iowa.

All the tropes of a classic Maryland loss were there, and the Terps lived up to just about every single one.

“Maybe we believed too much of the hype, it was getting to us,” tight end Chig Okonkwo said. “We’ve got to stay neutral … we’ve just got to be able to play our game and not get rattled when things go wrong.”

But while the stat sheet will not reflect favorably on Maryland, this was clearly not the same one-sided shellacking coach Mike Locksley’s squad experienced back in 2019.

The Hawkeyes are as advertised. Iowa was not a feckless excuse for a top-five team — it was the real deal.

“They played exactly what we expected them to play,” Locksley said.

The Terps had a strong series early to put their first points on the board, going 69 yards in eight plays. But from then on, it was a struggle to even get to three-and-out, which they only did twice.

The Terps amassed seven turnovers, including six interceptions that tied the program record set in 1941.

And Taulia Tagovailoa became the face of those mistakes. Despite entering the game as the paragon of quarterback play, Tagovailoa hit a snag, throwing five picks.

Decision-making often went out the window at times, with one of his interceptions going into triple coverage. After starting the campaign as one of the most efficient and calculated quarterbacks in the country, Tagovailoa was entirely different on Friday.

That’s not to say Tagovailoa was solely responsible for the missteps on his team. Penalties against the offensive line were costly in the opening half, and receivers were pestered all night by the Hawkeyes’ elite secondary.

Losing Dontay Demus Jr. at the beginning of the second quarter to a lower-body injury was no help either.

“I still have a lot of faith in him as a quarterback,” Locksley said. “For four games he played really, really well. And this was a poor game, not just on his part, but all of ours.”

A lesser side wouldn’t have been able to capitalize on every last fault Maryland had — but Iowa did.

Even so, the Terps mustered one more scoring drive in the third quarter where they marched 75 yards in eight plays. Following five drives with nothing but turnovers and punts, it was a well-made adjustment to salvage what they could.

Maryland’s nightmare second quarter began with that game-altering kickoff that led not just to Demus’ injury, but a fumble that gave Iowa great field position.

The Hawkeyes started three of their four drives in the second quarter at the Terps’ end of the field. That’d be a tall task for any team, but after Demus was gone, the entire squad seemed lost.

“I was just trying to stay locked in and [the team tried] their best to focus on what they had to do,” cornerback Tarheeb Still said. “So it wasn’t really an atmosphere change. It was just guys trying to dial in, lock into the game.”

Now, the obvious comparisons begin to rise. Okonkwo said he worried about Maryland’s younger players experiencing a game like this, while the veteran players knew what a result of this magnitude felt like.

It was another grand stage for the Terps to announce their arrival as a dogged team ready to compete with the best in the conference and the country. They didn’t do that.

Maryland was overshadowed — not just by Iowa, but by its own ideal and the success that had come with it thus far.

And the Terps know their fans have been eagerly awaiting their crowning moment. But Maryland just may not be there yet.

“There’s so many people who want so many great things for this program,” Okonkwo said. “We go out there and have a shot like that; it hurts because we’re this close.”