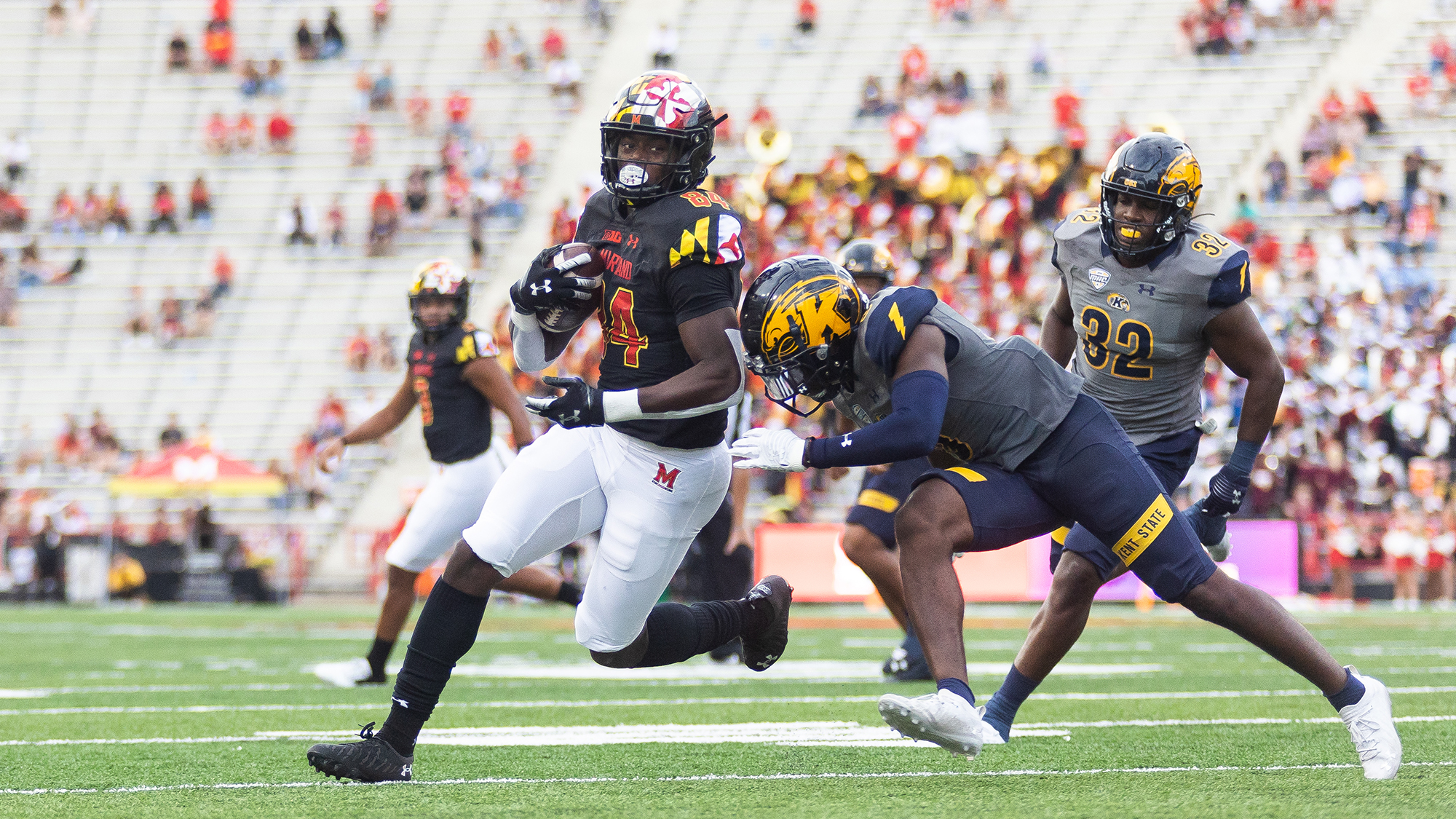 Through Maryland football’s first three games, it’s easy to see that its receiving group was one of the top in the country.

But what the Terps’ 37-16 win over Kent State offered was a new dimension beyond the core group of receivers to elevate Maryland’s passing game.

“Doesn’t matter if it comes from the receiving room, the tight end room, the running back room,” Dontay Demus Jr. said. “We’ve always got pass catchers everywhere. We’re playmakers all around the board.”

An astounding 12 different players caught a pass from Taulia Tagovailoa on Saturday, the most in a single game since at least 2015, flexing the depth the Terps bring to their passing game.

It was evident early that coach Mike Locksley’s squad would be getting more hands on the ball, registering nine different receivers in the first half.

What’s perhaps most impressive was how many players got multiple touches — eight different players had multiple catches, six of whom had three or more.

Two of the biggest contributors came as little surprise. Demus and Jeshaun Jones had 108 and 78 receiving yards, respectively. It was Demus’ seventh career game with more than 100 receiving yards, putting him tied for second in program history with Vernon Davis and Torrey Smith.

But as the list of receivers goes along, names such as Darryl Jones, Challen Faamatau and Corey Dyches stand out. While they each have made appearances this season, it’s not often they each get moments in the spotlight come game time.

No matter the depth chart position, Maryland got strong work out of its offensive players.

Jones had four catches for 28 yards, marking a second straight game with four-plus grabs for the senior. Although a mainstay in the Terps’ offense, Jones has not been a go-to throughout his time in College Park.

But this season, he’s already racked up 110 receiving yards, closing in on his career-high just four games in.

Faamatau only had two touches of the ball, but he made them count, taking a reception 11 yards and rushing for 19 on back-to-back plays.

And Dyches, who scored his first career touchdown, tied his career-high in receptions with three and continued to carve out an important place behind Chig Okonkwo in the tight end group.

Much like the rest of the offense’s successes this year, other members of the team were unsurprised with how productive their teammates could become gameday.

“When we go out to the practice field and take it to the game, things transfer over,” running back Tayon Fleet-Davis said. “These guys go hard in practice … so when they go out on Saturdays and do it, it’s not surprising to me.”

Consideration of future games was part of the reason Locksley said the offense relied on so many hands against the Golden Flashes. With a short week on tap for Maryland, players such as Rakim Jarrett didn’t play too many snaps.

[‘Living up to our standard’: Maryland football’s defense has delivered so far]

It didn’t stop Jarrett from scoring a touchdown on his sole reception of the day, a fade pass from Tagovailoa in the back corner of the end zone.

Demus and Jarrett still took the opportunity to remind fans they’re a lethal tandem, regardless of how many snaps they play. The pair each scored a touchdown, the third time this season both receivers had a touchdown in the same game.

But the offense wasn’t without its missteps. Dropped passes plagued most of the squad, and even Demus and Jarrett each had an easy reception in the opening half slip through their fingers.

And that’s what Locksley sees as the main factor keeping the offense from playing to the caliber they’ve come to expect. What enables the Terps’ offense to operate effectively is cutting down those self-forced errors.

“When we don’t have drops, penalties, sacks, fumbles, interceptions, we’re pretty good on offense,” Locksley said. “If you look at us on offense today … I would venture to say we didn’t necessarily play, on offense, without beating ourselves.”

Maryland actually seemed unhappy with its performance on Saturday. Despite a win and a 4-0 start, Locksley couldn’t help but emphasize where the Terps needed to improve, especially with No. 5 Iowa on the way for one of the season’s biggest matchups.

But with the expansive group of receiving talent on display against Kent State, Maryland is sure to cause problems for just about any defense it faces.

“You focus on one person and then another one exploits your next part of the game,” Demus said. “We have that type of ‘pick-your-poison’ type of offense where you can’t cover us all.”