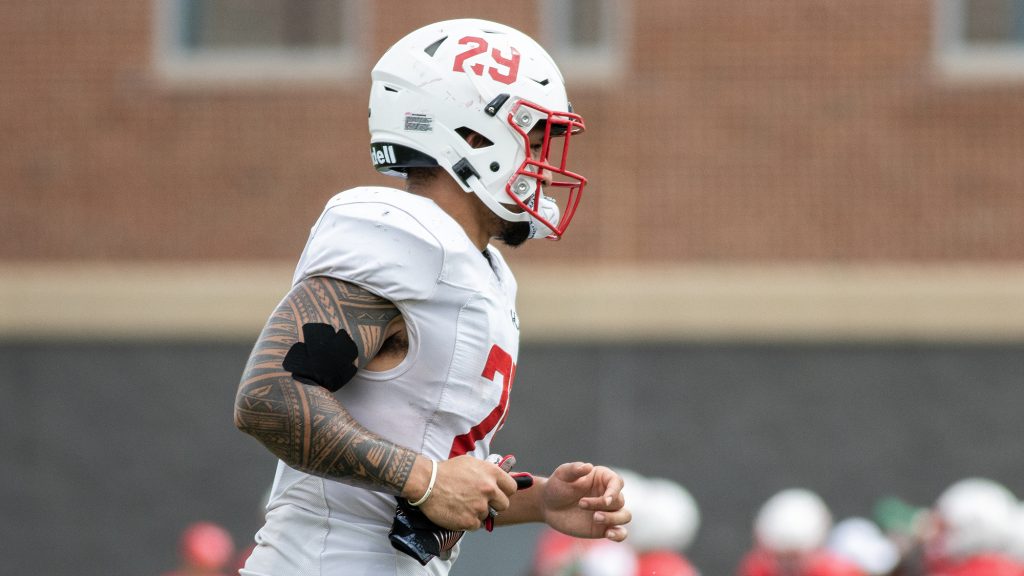 Challen Faamatau jogs across the practice field during a preseason practice for Maryland football on Aug. 17, 2021. (Julia Nikhinson/The Diamondback)

After Maryland football finished its first scrimmage of preseason camp, the team was treated to an evening of pro football in the form of the Ravens-Saints preseason game in Baltimore.

It was Maryland running back Challen Faamatau’s first NFL game and he was excited, but around the third quarter, he wanted to go and get something to eat.

As Faamatau rose from his seat toward the concourse, coach Mike Locksley smirked at him and told him to sit back down.

A little coaxing from his teammate Taulia Tagovailoa convinced Faamatau to sit back down and continue to watch the exhibition at M&T Bank Stadium.

Locksley and Tagovailoa emerged on the field minutes later to thank the Baltimore crowd and express their excitement for the season, with an added special message for Faamatau.

“I’d like to say to Challen,” Tagovailoa said over the PA system. “Congratulations on being on scholarship now my brother!”

After a long journey to get to this moment, Faamatau received the news from one of his closest teammates, someone he considers a brother. That made it all the more special.

“The most touching thing about it or what made me emotional was the person who said it,” Faamatau said. “Taulia and his family are a big part of my family as well.”

Growing up, Faamatau was best friends with Tagovailoa’s older brother, Miami Dolphins quarterback Tua Tagovailoa. The pair went to the Saint Louis School in Honolulu together in seventh and eighth grade before Faamatau transferred to another school.

From then on, the two were very close — spending time at each others’ homes, attending church together and becoming an integral part of each other’s families.

As Tua Tagovailoa and Faamatau grew closer, Faamatau became like another big brother to Taulia Tagovailoa.

Faamatau began his collegiate career at Pima Community College in Arizona but then transferred to Coffeyville, a community college in Kansas for the 2019 season. He racked up 575 rushing yards, 10 touchdowns and a Second Team All-Kansas Jayhawk Conference selection.

After finishing up his season with Coffeyville, Faamatau was hoping to transfer again. He said he looked at Texas Tech, but after the Red Raiders picked up a Division I bounceback, Faamatau planned to head to a Division II school in Oklahoma.

However, the news of Tagovailoa transferring to Maryland in May 2020 changed a lot.

Faamatau sat down with Tagovailoa and his family, received an offer from Locksley to come to Maryland as a preferred walk-on and decided to join the Terps about a week after Tagovailoa.

“I just wanted a challenge. Especially just knowing the talent that I have, I felt like it could happen here … I just kept my head down and continued to work,” Faamatau said.

In his first season, Faamatau appeared in four games for Maryland. His numbers were sparing, with a four-yard rush, eight-yard reception and a 14-yard kickoff return as some of the only stats he accounted for in 2020.

But the player who brought Faamatau to College Park believes he can help create the culture the Terps have been working hard to build since Locksley took over the program in December 2018.

“Just one of those guys that does any and everything that you ask. It’s like the ultimate team member, teammate,” Locksley said. “He’s one of our most beloved players.”

Locksley said that Faamatau has brought great energy and passion, something that has rubbed off on the players around him.

So when it came time to announce that Faamatau earned his scholarship at the Ravens game, Locksley knew exactly who should be the one to tell him.

“It’d be easy for me to do it, but … I thought it was fitting for ‘Lia to do it because of how close those two are,” Locksley said.

Trying to hold back tears with his face plastered on the jumbotron of the stadium, Faamatau said all he could think about were the memories he had with Tua and Taulia Tagovailoa when they were younger.

“It just brings back memories of when we were kids and just having goals that we were gonna play in a Division I conference,” Faamatau said.

With the start of the 2021 season fast approaching, it’s hard to tell just how much Faamatau will see the field. Tayon Fleet-Davis will be the first option at running back, but after earning his scholarship, Faamatau has a chance to make an impact for the Terps.

“What I tell everybody, you know, you just can’t get comfortable,” Faamatau said. “The standard I set for myself is just much higher now, and I just got to keep my head down and take advantage of the opportunity that’s given to me.”