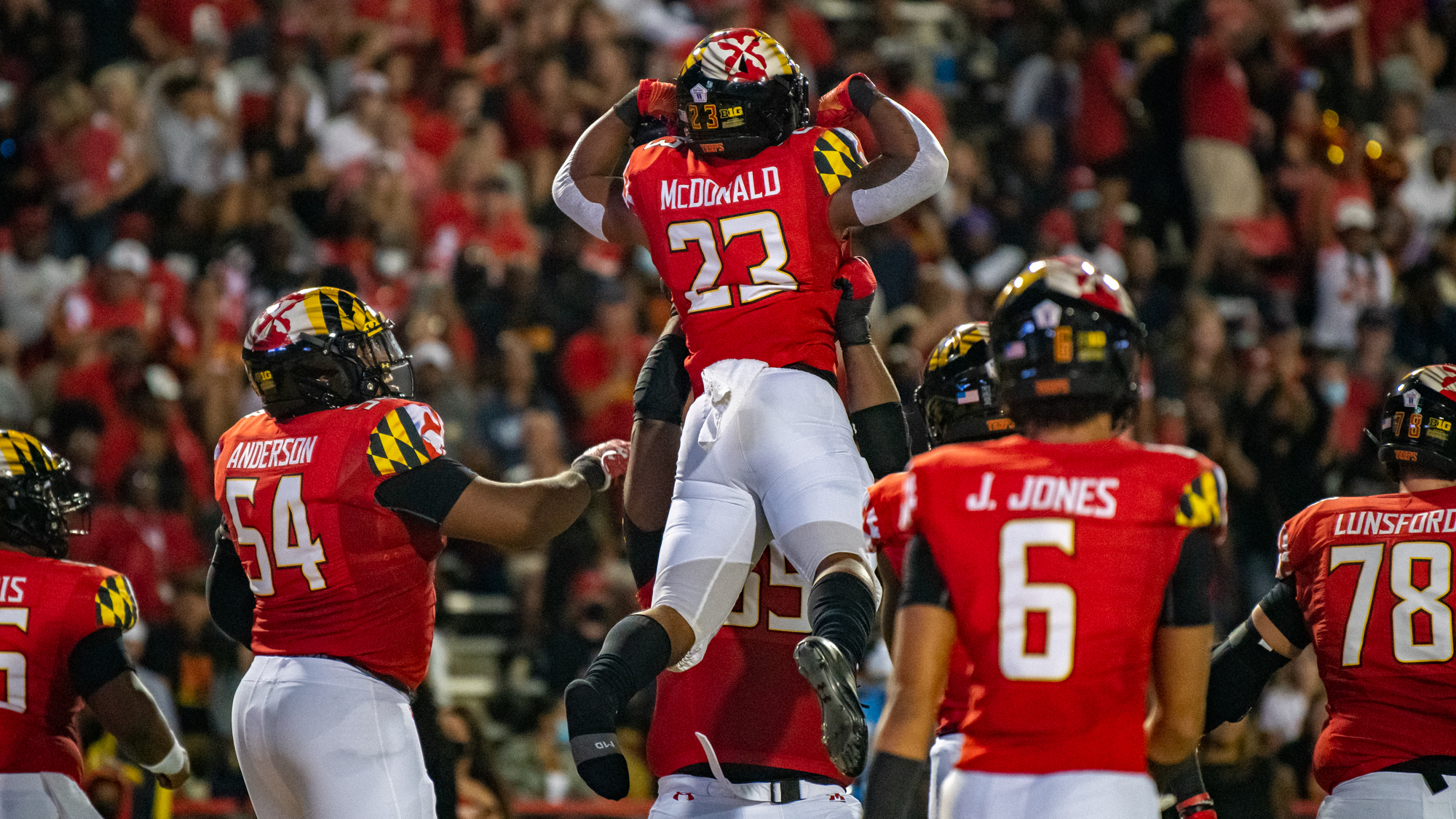 By the time Peny Boone hammered his way into the end zone for his first career touchdown, he wasn’t even the first player on his team to do so.

A few minutes earlier, running back Colby McDonald took his first collegiate touch and ran his way through the Howard defense, en route to his first career trip to the end zone.

It was all Maryland in the return of Saturday night football to College Park, as the Terps exercised their entire roster in a 62-0 win over the Bison.

“Always good when you get to play a lot of players,” coach Mike Locksley said. “For the development of our team, as we’re still in the growth phase, it’s great to be able to play a lot of these young guys and see them go out and compete.”

The Maryland offense was clinical in its first two drives, finding the end zone in both. First, it was Dontay Demus leading the charge, making two contested catches that amassed 32 yards and his second receiving touchdown of the season. It also meant Demus had scored in six consecutive games, the longest streak in the Big Ten.

It was Tayon Fleet-Davis who got the spotlight on the next drive, winning a foot race with the Howard defense, getting the advantage on the edge and diving for a 17-yard touchdown.

[Maryland football wants to be versatile on defense. Greg Rose is just that.]

All the while, the Maryland defense locked down the Bison. The Terps were stingy with the visitors from the first minute — and it paid off.

Locksley’s defense allowed a measly 61 yards in the opening half and allowed just four first downs, three of which came off of penalties by Maryland’s defense.

The Terps continued to throttle the Howard defense, driving their way down the field. Knocking on the door once again, the Bison finally got some pressure on Taulia Tagovailoa, who had mostly coasted through the opening quarter.

But just before the defense was able to bring the quarterback down, he aired a ball toward Chig Okonkwo, who made the catch in the corner of the end zone.

McDonald and Boone’s scores with an additional field goal as time expired in the second quarter gave Maryland a commanding 38-0 lead at halftime.

“They’re the best running backs I’ve ever seen,” offensive lineman Mason Lunsford said of the Terps’ roster of tailbacks. “We’ve been working on it a lot in practice, it’s been one of our points of emphasis. … We can throw the ball; we’re just trying to make sure we’re a balanced offense.”

The starters got one more drive to show out. And they did.

[Maryland football fought through adversity to knock off West Virginia]

Tagovailoa connected with Demus and Rakim Jarrett for 57 combined yards on the opening drive of the second half. Jarrett broke free on his sixth catch of the day, burning the defense for a 36-yard score.

The second-stringers took over for the rest of the matchup, giving fans the first look at VMI transfer quarterback Reece Udinski, among others. It was a strong debut for Udinski, hitting Carlos Carriere, who juked his defender for a touchdown in their first drive.

“Coach Locks is big on, ‘We need everybody to win all 12 games,’” Jarrett said. “Some of the younger guys got a great opportunity to see how a real game feels against somebody else.”

The Terps then gave backup quarterbacks Eric Najarian and David Foust alternating snaps in what would be their last offensive drive. Roman Hemby got the chance to score his first career touchdown as well, punching it in from the 1-yard line.

By the time Hemby crossed the goal line, Maryland had long-cleared Howard, completing its rout of the local foe.

“Our team, for four quarters regardless of who was in the game, maintained the intensity that we wanted to have,” Locksley said. “No matter who’s in there, we were looking for execution and I thought, for the most part, we got that out of them today.”