Maryland football fought through adversity to knock off West Virginia 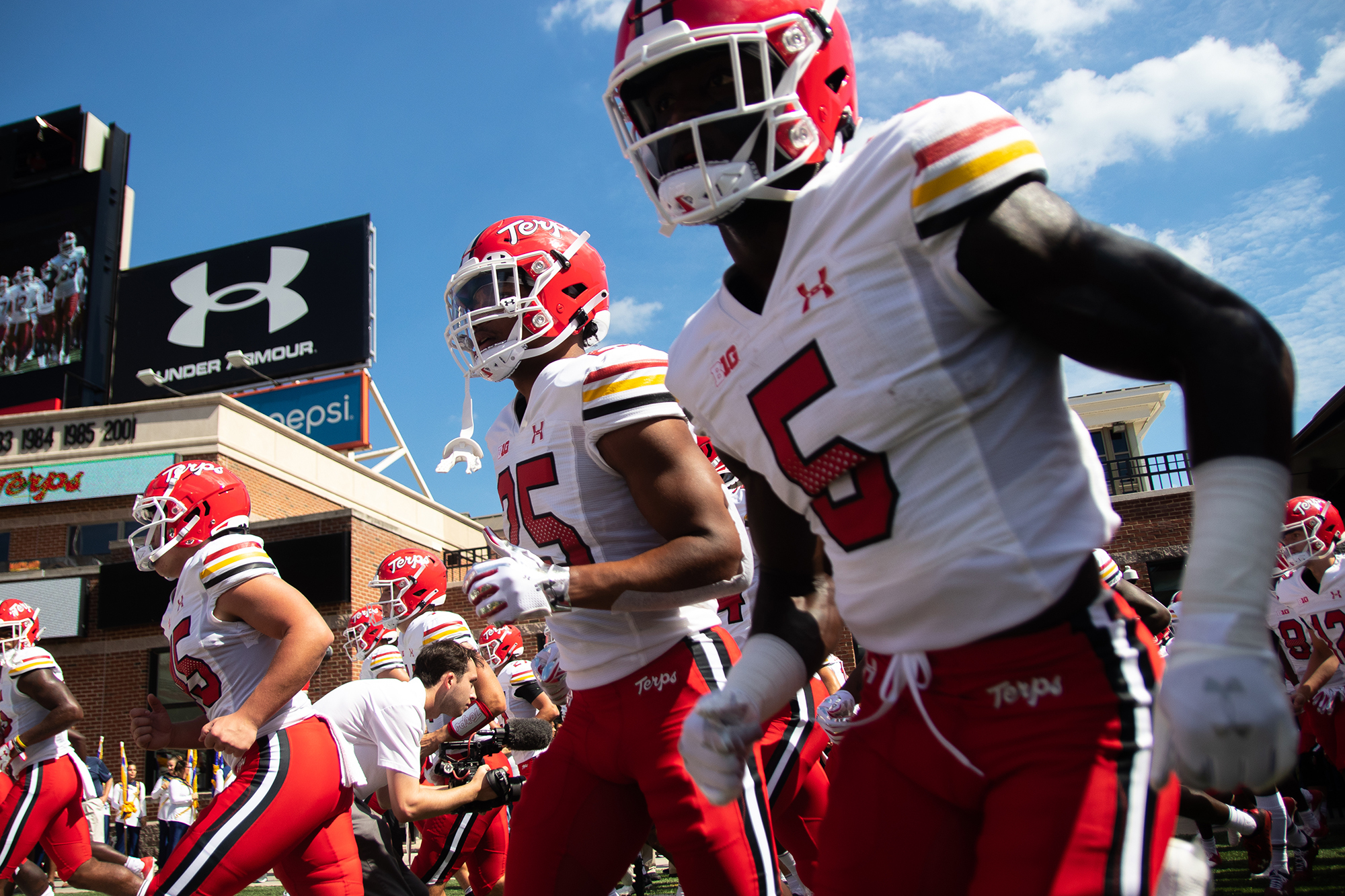 Maryland football runs onto the field before the Terps' 30-24 win over West Virginia on Sept. 4, 2021. (Julia Nikhinson/The Diamondback)

Getting to see the oversized Maryland flag rush down the student section is a tradition like none other at a crowded football game. As fans returned to Maryland Stadium for the first time in 651 days, the enormous flags were primed and ready.

And as the headset-adorned gentleman at the top of the student section signaled for the flags to be hauled down the mob of students, one end of the left flag remained stagnant.

Despite part of the flag lagging behind, it eventually made its way down to be on full display for the crowd of 43,811. The students can get a break; it’s been awhile since they last did it.

But, the first-quarter tradition that went haywire was exactly what Maryland football’s opening game was — highly anticipated, at times ugly, but ultimately a triumph.

“Really proud of our team,” coach Mike Locksley said. “They faced adversity throughout the game … our guys kind of bonded together and they kept fighting. That’s the important thing.”

The Terps left Maryland Stadium with a win in their 2021 opener, outdoing West Virginia, 30-24. And although the victory was well earned and there was much to be excited for with a full season ahead of them, mistakes were ever present.

There were early issues for Maryland. Rakim Jarrett fumbled his second kickoff return, getting lucky that the ball tumbled out-of-bounds, meaning only poor field position.

A Mountaineer falling on top of the loose ball could’ve been catastrophic, given the error followed a clinical drive by the West Virginia offense that ended in a touchdown. However, what became apparent of this Maryland team was its ability to fight through adversity and frustration.

For Jarrett in particular, that miscue didn’t define his game.

“Good players aren’t afraid to make mistakes,” Locksley said. “[Rakim] is one of those guys. The kickoff … those things happen.”

After the flub, Jarrett racked up 114 more receiving yards, including a 60-yard touchdown that would seal the deal in the fourth quarter for the Terps.

“I’m sure he’ll make a few more mistakes,” Locksley said. “But, we also saw that he has the ability to make a lot of plays for us. We’ll live with those growing pains and we’ll continue to see him get better with each and every game. He’s six games into a career so really excited for his future.”

Special teams seemed to be a pain for Maryland all day long, as it struggled to contain the explosive Winston Wright. He amassed 217 kick return yards, including a 98-yarder that resulted in a touchdown one play later.

But, once again, the Terps had a response — a defensive unit with big playmaking ability.

The Maryland defense came up in key moments throughout the game, but it was the reply from Jakorian Bennett in the fourth quarter that shifted everything.

After Wright burned the Terps for a 48-yard kickoff return that only halted due to a misstep out-of-bounds, the Mountaineers were knocking on the door after being held scoreless in the third quarter.

One shot to the end zone from West Virginia quarterback Jarret Doege was enough to dispel the threat, as Bennett picked the ball away from the receiver and ultimately set up Taulia Tagovailoa to find Jarrett for the game-winner.

And Tagovailoa wasn’t one without his troubles, even for a player who had 332 yards, three touchdowns and no interceptions.

Locksley said he felt that Tagovailoa started out “antsy” and made a few decisions that potentially cost the Terps points, namely at the end of the first half.

Maryland’s offense had first-rate field position after recovering a muffed punt, and Tagovailoa got the Terps to the 20. But on third down, he took a mean 13-yard sack.

Had he thrown it away, it would’ve meant a considerably easier field goal for Joseph Petrino, who missed from 51 yards instead.

“Coach is always telling me I’m good in the pocket,” Tagovailoa said. “The pocket was nice and I was running for no reason. That’s something I’ve still gotta work on, but my teammates continued to encourage me.”

But Tagovailoa would calm down through the rest of the game, relying more on the playmakers he had around him, a tool Locksley said he was glad could support Tagovailoa in his first start in front of a crowded stadium.

“All he has to do is do what he’s coached to do,” Locksley said. “We saw him execute the offense to a T late in the third quarter.”

And as Tagovailoa’s ability and leadership came through, so did Maryland, as he slung the game-sealer to Jarrett and started the year in the win column.

So as fans and players alike enter into a new college football season that they can only hope fades away last year’s uncertainty, it has begun with energy and passion — save for a few slip-ups.