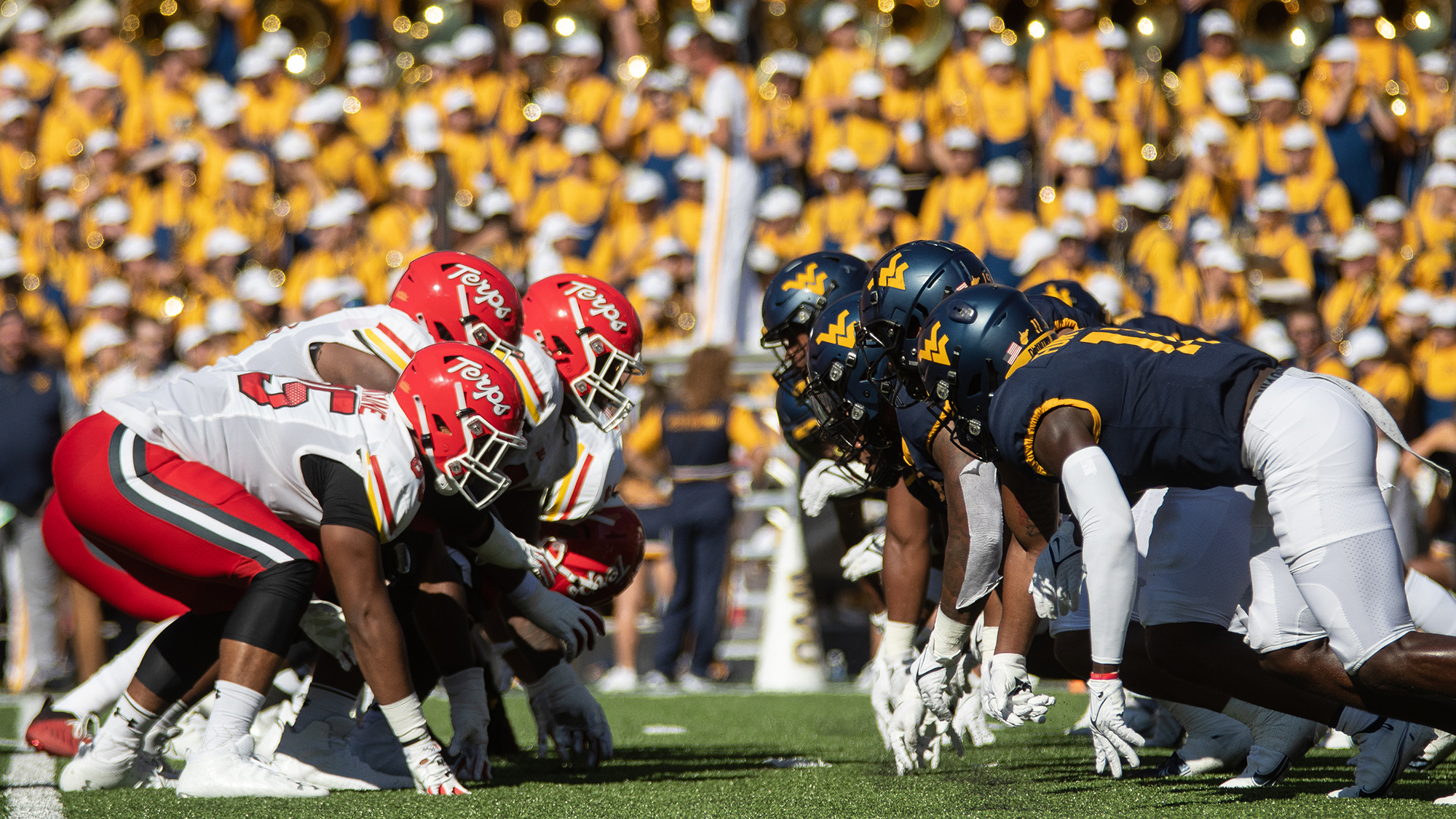 Maryland and West Virginia meet at the line of scrimmage during Maryland football's 30-24 win over West Virginia on Sept. 4, 2021. (Julia Nikhinson/The Diamondback)

Under coach Mike Locksley, Maryland football lives and dies on the big play. On Saturday against West Virginia, the Terps lived.

With the Mountaineers threatening in the fourth quarter down two, quarterback Jarret Doege heaved a pass to the end zone, looking to send West Virginia back in front. But Maryland cornerback Jakorian Bennett tracked the ball, hauling it in for a momentum-changing interception.

Prior to the game, Locksley said he saw the contest as a “barometer” of just how far Maryland has come and how much work is left to be done. After 60 minutes of play, it’s clear the Terps have improved from years past, even if they’re not fully where they want to be.

Take Tagovailoa. The junior quarterback shined for much of the afternoon, looking more poised and in command of the offense. He racked up 332 passing yards and three scores while not turning the ball over, making perhaps the day’s most subtly impressive play on an 18-yard touchdown pass to tight end Chig Okonkwo as he stared down four West Virginia defenders that broke through the line.

There were times when he struggled, too. He was sacked twice, including one 13-yard loss on third down that led to kicker Joseph Petrino missing a difficult 51-yard field goal.

But more often than not, he connected.

“Our O-line did a good job of giving me time. … The receivers ran great routes, made the throws easier for me. And [offensive coordinator Dan] Enos called great playcalls the whole game,” Tagovailoa said. “It’s just up to us to execute.”

And when he did, he typically found one of his top two wideouts.

Dontay Demus was the most lethal target, easily clearing the secondary for a 66-yard touchdown in the first quarter. Though it was his only impact on the score sheet, he finished with six catches for a career-high 133 yards, breaking off big play after big play to move Maryland down the field.

Jarrett came to life in the fourth quarter, finishing with 122 yards on six catches. The fourth-quarter score was a much-needed insurance marker made possible by Jarrett’s speed and a confused Mountaineers defense.

“We liked that play in the coverage they were running,” Jarrett said. “We were just trying to set it up for the perfect time, and I think that was.”

Even the Terps’ defense, one of the bigger question marks entering the year, showed significant progress.

The game’s first 20 minutes renewed concerns, as running back Leddie Brown carved through the front seven. West Virginia’s senior running back racked up 100 all-purpose yards and all three of his team’s touchdowns in the first half.

Then, cornerback Nick Cross picked off Doege, setting off a series of eight straight scoreless drives for the Mountaineers. Maryland clamped down, forcing two more defensive turnovers — the Bennett interception and a Branden Jennings fumble recovery that sparked the Terps’ stagnant offense to reclaim the lead for good.

Despite the progress, Maryland was nowhere near perfect. The special teams in particular struggled, surrendering two long kick returns and nearly fumbling away a kickoff of its own.

The Terps’ lingering issues from past years creeped back, too — particularly dropped passes and unforced penalties.

The offense also stalled for two quarters, getting into a rut of predictable run plays and ineffective screen passes that led to three-and-outs.

Yet the errors, while concerning, are fixable. And all those mistakes are minimized when there’s measurable steps forward.

But even with that progress, the Maryland of yore still flashed through. And in a game with several head-turning big plays, one more — a 53-yard dash by running back Tayon Fleet-Davis — sealed the Terps’ win. While it wasn’t pretty, it was classic Maryland.

“Great game for us for a first game to really see who we are and create an identity as a team that’s going to fight for four quarters and not let adversity get us down,” Locksley said.