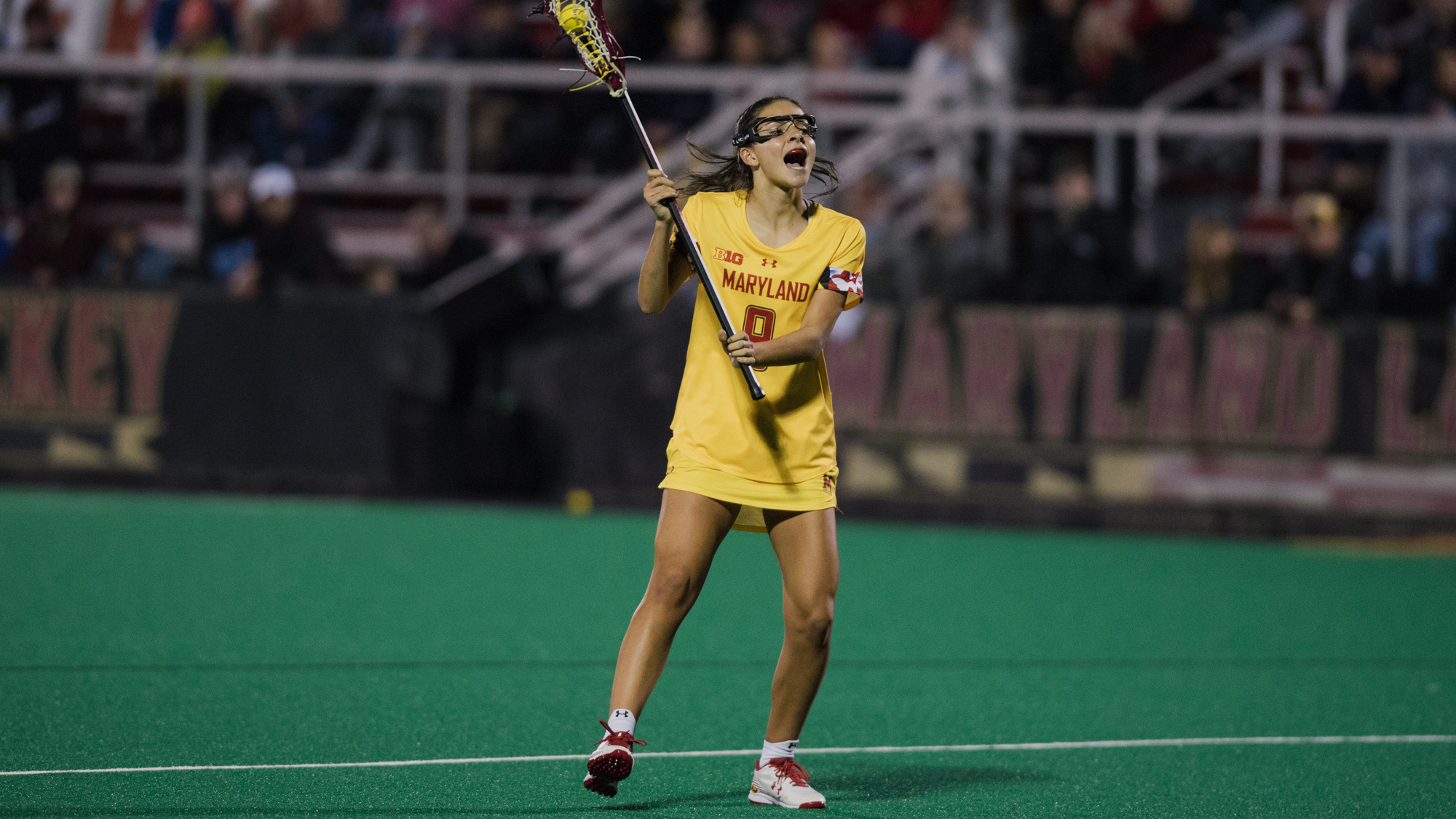 Libby May calls for the ball during Maryland women's lacrosse's 16-7 win over Navy on March 4, 2020. (Gabby Baniqued/The Diamondback)

Catie May sat a few feet behind the end line, looking for a way to fire up a lackluster Maryland women’s lacrosse offense as it struggled early against Penn State.

As Kayla Abernathy challenged May with her stick, she saw a familiar figure running straight toward the net with a stick raised to the sky, ready to cap off the play they’ve run a thousand times.

It was Catie’s sister Libby.

The duo had six chances to suit up together for the Terps during Libby’s freshman season, but in 2021, the sisters have the opportunity to make a big impact in reviving a young Maryland offensive unit.

“She definitely looks for me,” Libby said of her sister. “Our style plays really compliment each other. She knows where I like to go.”

The Terps saw some of what this tandem was able to do last season in the opening contest against George Mason. They combined for six goals in that game, the same they accrued in Sunday’s 15-13 loss to the No. 21 Nittany Lions.

In Maryland’s match against the Patriots, Catie put away a team-high four goals and Libby notched her first two career scores. When the pair came up against Penn State, their developed on-field connection was obvious as they linked up on two back-to-back goals.

“It feels great, I’m so proud of how hard she works and being able to put it together on the field just makes me happy,” Catie said.

The sisters never played on the same high school squad, as Catie attended McDonogh School and Libby attended Hereford High School. But the COVID-19 pandemic offered an opportunity for the duo to get unique practice time together.

With most of the team separated during quarantine in 2020, many Maryland players had to workout and train on their own. But the Mays had the chance to work together to stay match fit and improve in a time when most weren’t able.

“We would work a lot together when we were in quarantine, going up to our local turf and just working on those feeds inside,” Libby said. “I really like getting the chance to play with her. She’s so encouraging and supportive. And she’s always telling me, in a good way, what to do.”

[With gaps to fill, Maryland women’s lacrosse prepares for an unpredictable 2021 season]

“We had a lot of scorers … on 13 goals,” coach Cathy Reese said. “A lot of these … names that you’re seeing out there … are first year players. Our team is young, our offense is out there. We’re just working on playing together.”

The Mays were able to spark the attack and keep Maryland in the game until the final minutes of the match, but Reese said team shooting needs to improve. Her squad shot .342 on the day, which she said was not good enough.

Despite the win column remaining empty after the inaugural game of the season for the first time since 2006, the May sisters — and the Terps at large — said they are happy to be playing on a competitive level once again.

“I would think about being back on the field every single day [during quarantine],” Libby May said. “It was just really nice to get back to playing with my teammates and getting a chance to compete.”