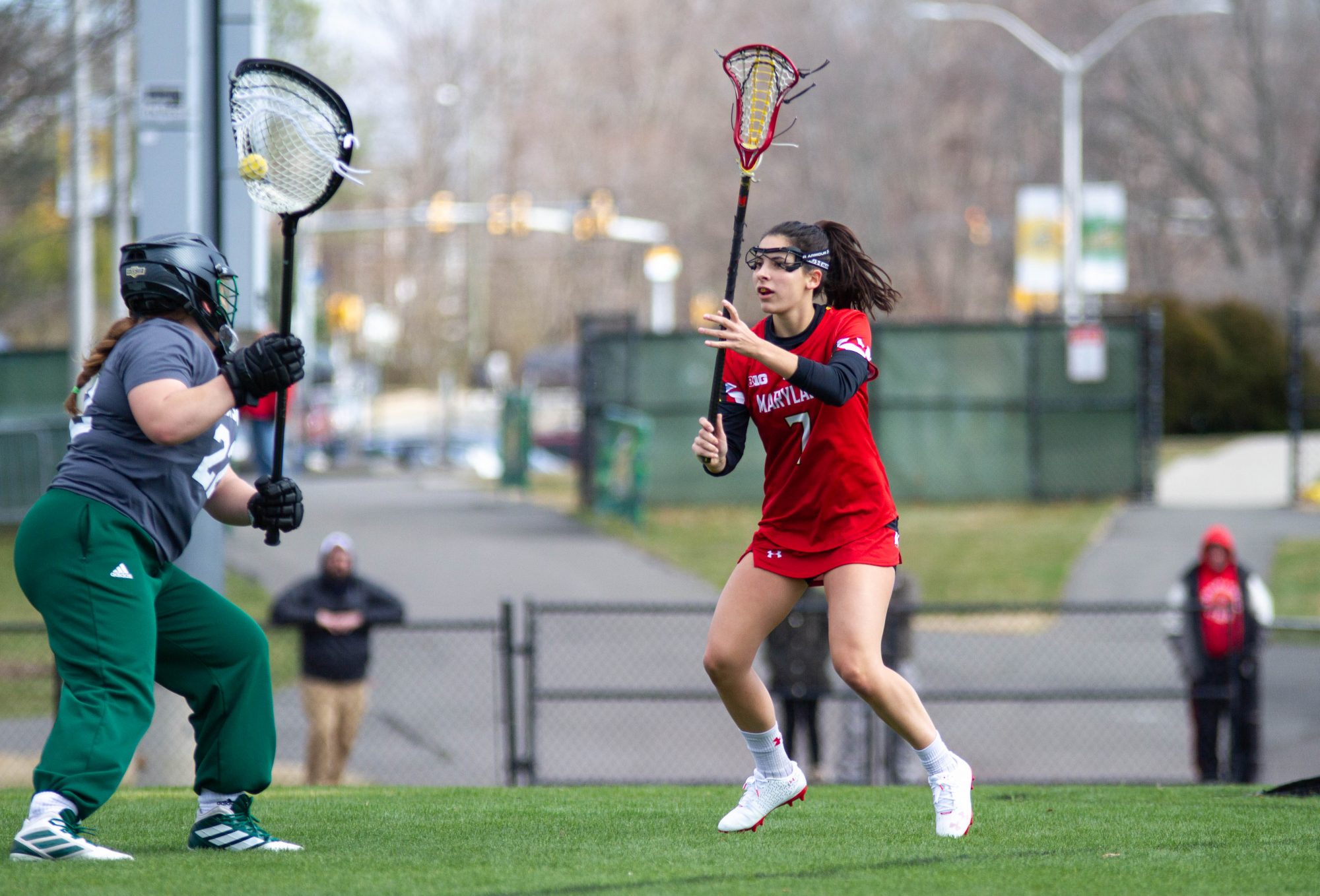 FAIRFAX, Va. — All senior Kali Hartshorn had to do was plant her foot and shoot on her first free-position attempt Saturday to find the back of the net and extend Maryland women’s lacrosse’s rout.

“She’s good at that,” coach Cathy Reese said. “She’s one of the best shooters in the country.”

When the Terps took on George Mason last season, Hartshorn put up three goals on the way to a 16-5 victory.

In her first game back from Maryland’s championship-winning season, she was one of 10 Terps to find the back of the net, tallying four goals en route to a 19-6 victory over the Patriots on Saturday.

“It’s exciting to come together for our first game and end up in the win column,” joint high-scorer Catie May said. “I’m really proud of all of my teammates. There’s a lot of energy and excitement.”

The Terps started on the back foot, allowing an early goal to midfielder Abby Folker, who scored two goals against Maryland last season.

George Mason kept possession for the first five minutes, keeping the Terps out of the net, but a wrap-around shot from Catie May in the seventh minute gave Maryland its first goal of the season.

“A lot of jitters when we first got out there, which is to be expected,” Reese said. “But I’m proud of how we pulled it together in the first media timeout and told everyone to take a deep breath and get out there and play. From that point on we played with a little more confidence and trust in our teammates.”

The Patriots were quick to respond with a goal from attacker Hailey Johnson, who weaved through the Terps’ defense before shooting through the legs of goalkeeper Maddie McSally.

George Mason’s scoring chances were few and far between, though, and through the rest of the first half, it was all Maryland. Reese’s squad went on an 8-0 run, flashing the ability that propelled the team to an NCAA title last season.

Freshman Libby May scored her first two career goals, both on free-position shots, while her sister Catie May added her second goal after being set up for an open net by Hartshorn.

Hartshorn took control of the closing minutes of the first half, scoring three goals in a row to give Maryland a 9-3 lead at the half.

“She hustled all over the place … trying to hunt the ball down,” Reese said. “That sometimes goes unnoticed, but it was a huge part of our success on the offensive end.”

The Patriots broke their scoring drought one minute into the second half with a goal from attacker Deanna Balsama. It broke a 23-minute scoring drought.

The comeback did not last long as Catie May added her third goal. Brindi Griffin, the Big Ten Preseason Player of the Year, had been held in check for most of the game, but she quickly made her presence felt, scoring two goals in quick succession.

Hartshorn got her fourth tally on a free-position shot. Unlike her first, she took a few steps off the line. But in the end, the result was the same

The Patriots added an additional goal from Balsama, who finished with a team-high two tallies. Folker found her second late in the second half, matching her total from last season.

Additional goals by Maryland freshman Hannah Leubecker, Griffin, Catie May, and Darby Welsh helped build the Terps’ lead beyond reach for the Patriots as they finished the game, 19-6.