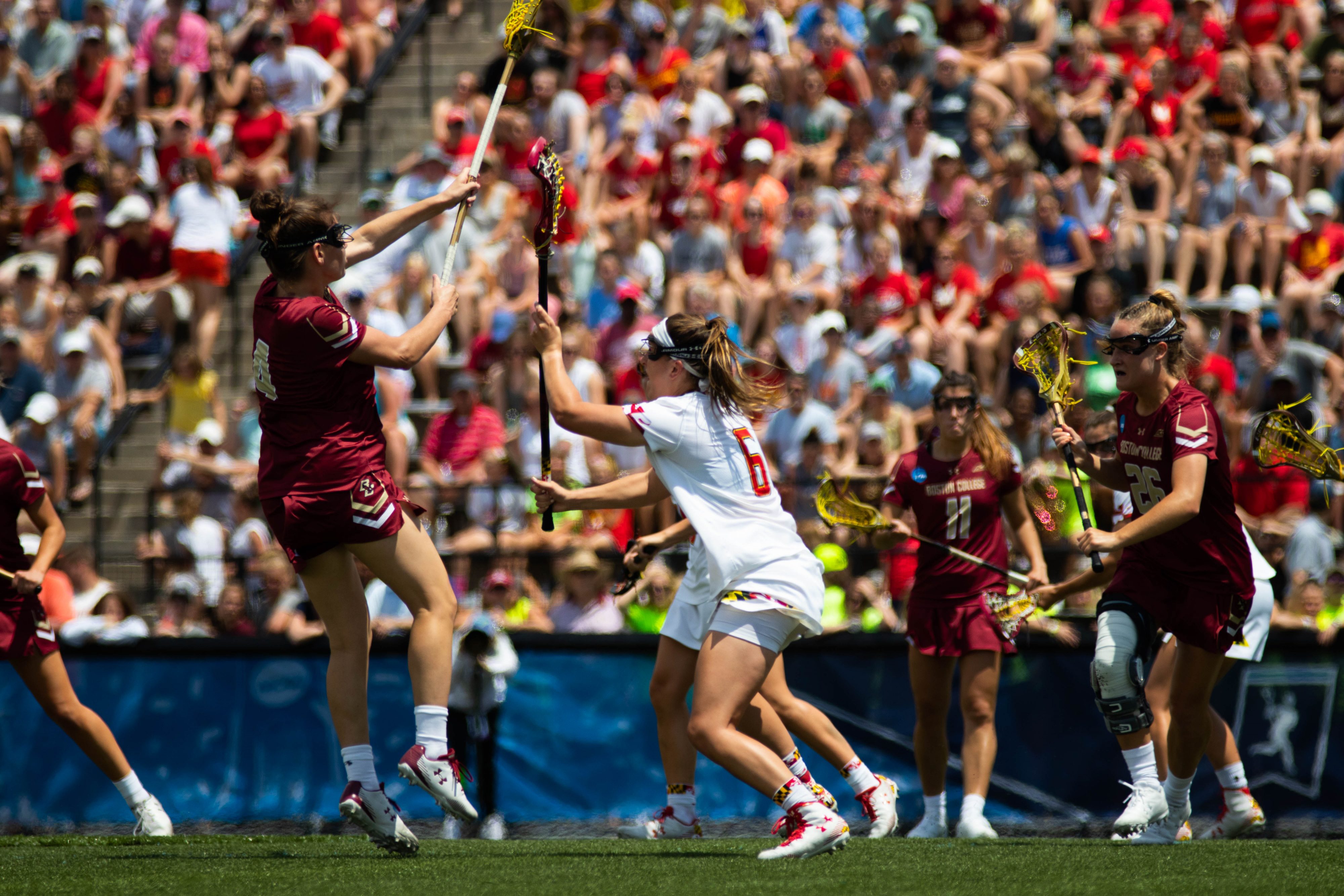 Maryland women’s lacrosse made history in 2019. The Terps finished their season with a 22-1 record, produced the first goalie to ever win the prestigious Tewaaraton Award and brought home a record 14th NCAA title.

Even after all that success, though, there’s no let-up in College Park.

Preseason-ranked No.1 Maryland comes into its 2020 campaign with high expectations after a title-winning season. Despite 193 unaccounted goals from last season and holes to fill in the defense, the new-look Terps are hoping to establish their own legacy as they defend their national championship.

“We’re a whole new team, but we are going to be just as great,” captain Meghan Doherty said at Spring Sports Media Day.

Following the 2019 season, Maryland said goodbye to its top-three goalscorers in Jen Giles, Erica Evans and Caroline Steele. Giles — a captain and Tewaaraton finalist — and Evans each posted 59 goals with Steele sitting just behind with 53.

Without that firepower, junior captain Grace Griffin and Big Ten Preseason Player of the Year Brindi Griffin — who finished fifth and sixth respectively in scoring last season — will likely be the main catalysts for the new attack.

“Some of the names we’ve heard over the past four years have graduated,” coach Cathy Reese said.”So players like Brindi Griffin and Kali Hartshorn, Grace Griffin, Hannah Warther and Catie May, these are names we’ve heard … and we’re just going to need to lean on them to step up and propel us into this season.”

Hartshorn, who finished fourth in goals last season with 48, will have her own opportunity to make history. She sits 121 career draw controls away from Maryland great and three-time Tewaaraton award winner Taylor Cummings on the program’s leaderboard. Hartshorn tallied 137 in 2019.

As returning attacking players are stepping up this season, the Terps are looking toward their top-ranked freshman class to make significant defensive contributions in 2020.

One of Maryland’s star recruits aiming to do just that will be Catherine Flaherty, the highest-ranked defender in her class. Flaherty, the No. 13 overall recruit according to Inside Lacrosse, should see a large chunk of playing time as the Terps nail down their defensive lineup.

After missing Maryland’s fall season due to injury, Doherty will be the sole defensive starter returning from last season. Reese said she will be the anchor of the backline and a key to the Terps’ defensive growth with such a young group.

“I’m leading the defense now,” Doherty said. “I’m returning and I’m excited to add my confidence to the younger players who haven’t seen as much time and need that extra boost. I want them to know that I’m here and I’m excited. I feel confident with them being beside me. I know if I miss a step they have my back.”

The defense will also be working with a new goalie following Megan Taylor’s graduation after a Tewaaraton award-winning season. Taylor amassed 217 saves with a .551 save rate in 2019.

Among the players vying for her spot are junior Madison Hine and sophomore Maddie McSally. Hine played in two games last season, recording three saves without allowing a goal in 17 minutes. McSally played in seven matches, tallying 16 saves and allowing eight goals. Freshman Emily Sterling, a four-star recruit from Bel Air, looks to be in the race for playing time between the sticks as well.

Despite the inexperience in parts of the squad, senior players have taken notice of younger ones in practice over the past few weeks.

“They come out here with confidence, they are not afraid to be out here,” Hartshorn said. “They will take charge and talk to whoever they need to talk to. … Everyone here on this team has confidence. I mean, this is Maryland lacrosse, not everybody gets to play here. People that do play here, they do have the confidence and they appreciate playing here.”

Reese’s squad will have a tough schedule to contend with as they take on 11 preseason-ranked squads, including five top-10 matchups.

“We are looking to be challenged in different ways,” Reese said. “Competing against yourself everyday [in practice], we’re playing against Maryland style offense and defense. It’ll be nice to see what other teams have to throw at us that we can learn from and see if we can make adjustments on the fly.”

Maryland will open its season on the road against George Mason on Feb. 8 before the home opener against No. 14 Florida on Feb. 15.