With a slim rotation, Maryland women’s basketball is trying to conserve energy 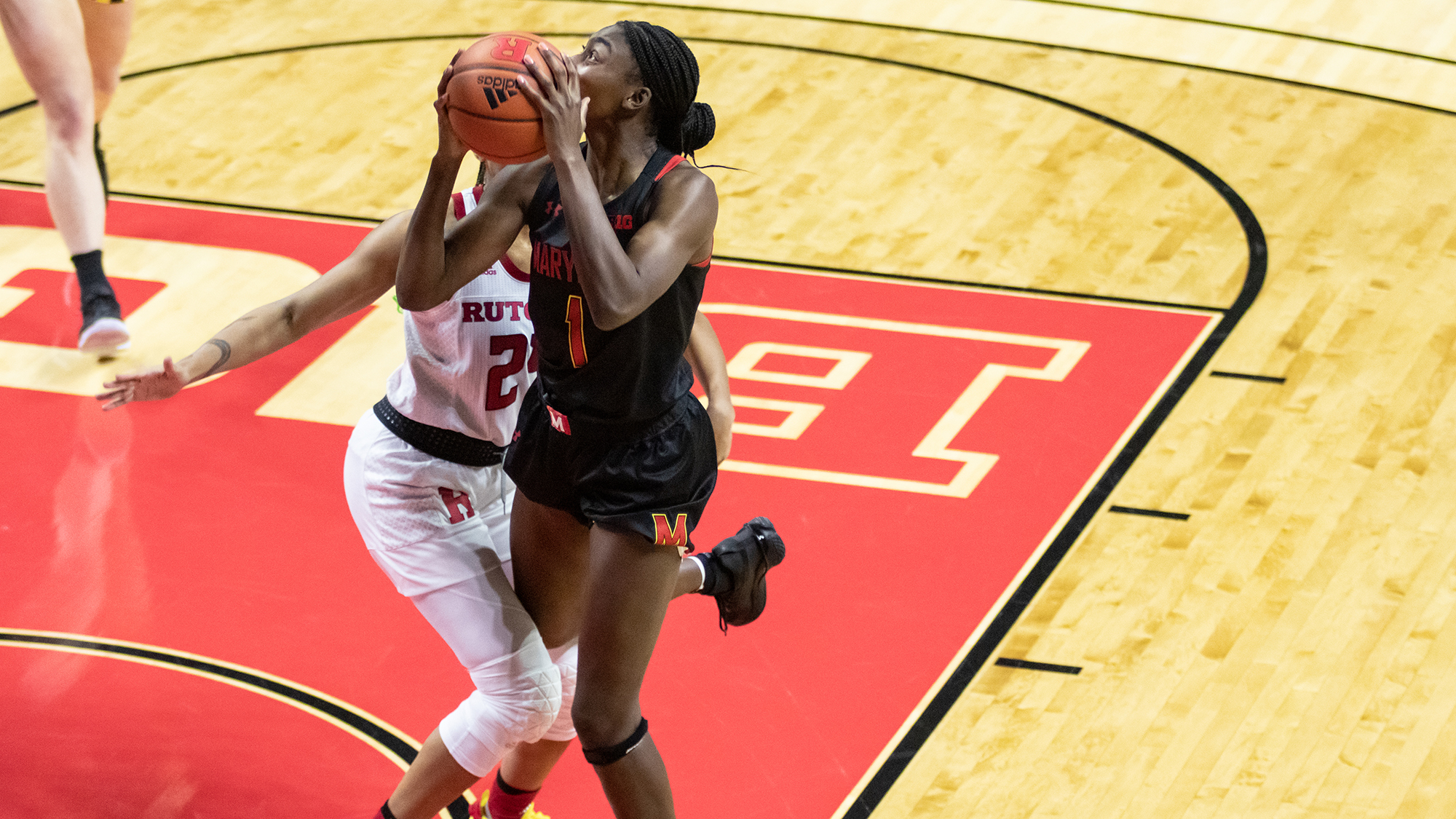 Diamond Miller goes for a layup in Maryland's 91-87 win over Rutgers on Dec. 14, 2020, in Piscataway, New Jersey. (Julia Nikhinson/The Diamondback)

With under two minutes left in Maryland women’s basketball’s 91-87 victory over Rutgers, Chloe Bibby chased after a loose ball with every bit of her energy, nearly falling over as she was fouled. Bibby gave the Terps an extra possession in a close game, and while they wouldn’t score, that effort stood out in a game that was taxing for coach Brenda Frese’s squad.

It was the team’s first game after star guard Angel Reese’s injury. When she got hurt against Towson, Maryland cruised to victory, allowing it to go to its bench.

But against Rutgers, the team wasn’t afforded that luxury.

The Terps saw just seven players take the court against the Scarlet Knights. One of those seven, Faith Masonius, played just seven minutes. The other six players shouldered a heavy load, all playing roughly 30 minutes. As the season progresses, those minutes could lead to tired legs.

“Sometimes I think we might pace ourselves,” Frese said. “When you look at the minutes, we had six or seven players play against Rutgers in a really physical game.”

It led to some issues for this young Maryland team, which gave up runs of 17-5 and 12-4 in the second half and allowed bigger leads to slip away.

But some of the Terps’ top players also struggled due to fatigue. Diamond Miller played a career-high 33 minutes and shot just 6-of-17 from the field. For Frese, it’s a matter of balancing her players’ stamina and competitiveness as the season progresses.

Maryland’s lack of depth can be attributed to a few key areas. The loss of Reese is one, as she had started all four of the games she played in. And while reinforcements are on the way in graduate transfer Alaysia Styles, a major source of minutes is sidelined for the foreseeable future.

Another is the difficulty of developing a stable rotation due to the lack of non-conference games. The team had to cancel matchups against Coppin State and Mount St. Mary’s due to positive COVID-19 tests among both of the opposing school’s personnel. Without those games, the Terps are learning their rotations on the go — and in a competitive part of the schedule.

“That’s the kind of the tough, tough part about this season,” Frese said. “The uniqueness is you don’t have those non-conference games that you can kind of build some of that confidence within your rotation.”

And while Maryland added a non-conference matchup against James Madison this Saturday, the dearth of playing time has especially affected two younger players — Taisiya Kozlova and Zoe Young — who Frese is reluctant to throw directly into a high-leverage situation.

“Again, you’ve got to remember for [Kozlova] and [Young] like, to have your fifth game — and for [Young], who hasn’t even stepped on the court yet — to be a conference game,” Frese said. “Normally they would be getting some minutes in your non-conference type of games.”

So, Frese has turned to her more experienced options. That might mean the Terps go seven-deep for the next few games, at least until other reliable options arise.

But the Dukes may also offer a respite Saturday, a time where Kozlova and Young could make their claim for a spot in the rotation as the bigger games come. If every game is as physically demanding as Maryland’s Big Ten opener, it will need all the help it can get.

“We have to worry about another competitor coming for our neck,” Miller said. “So we still have to keep this same intensity.”