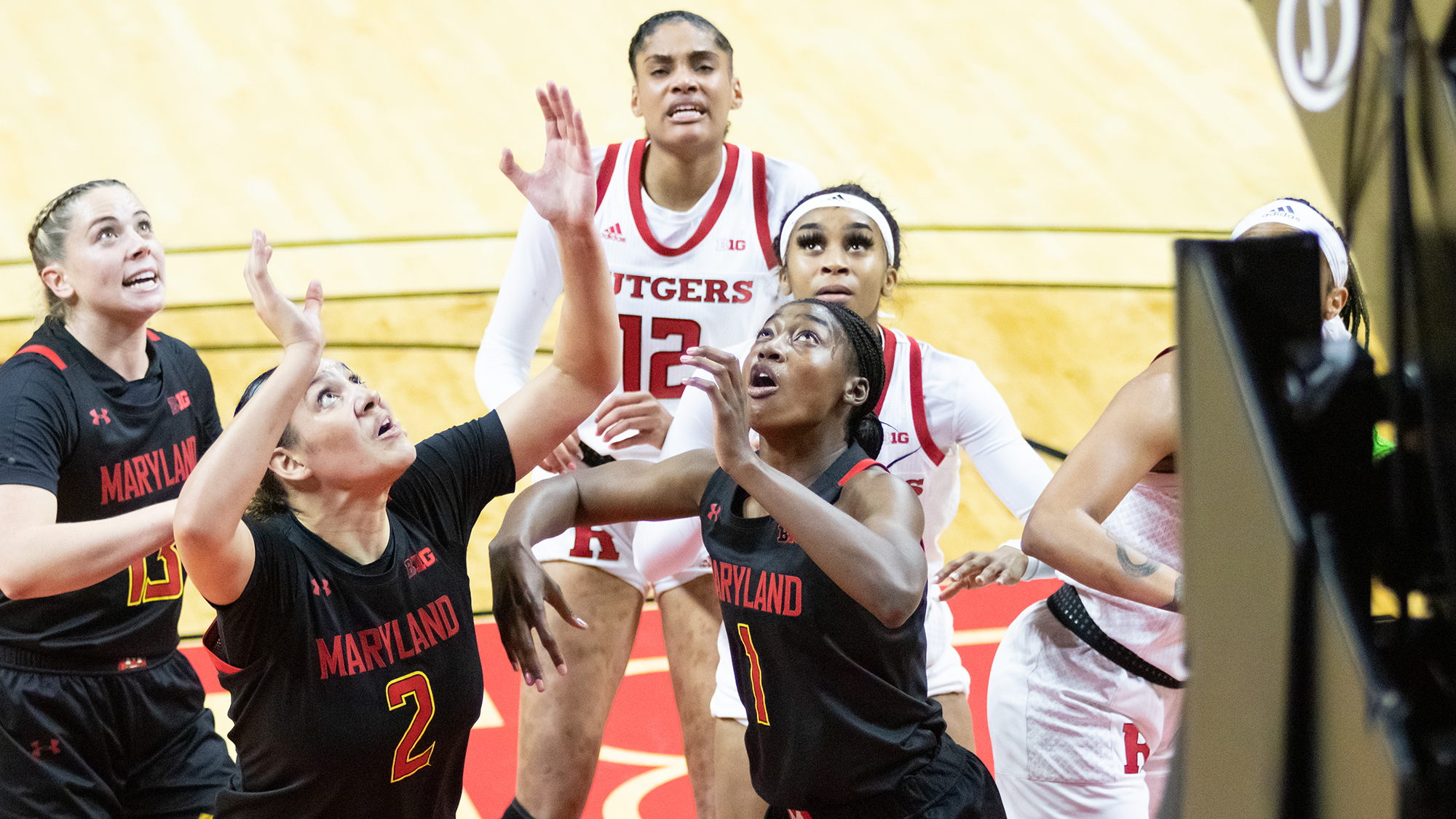 Mimi Collins caught the ball at the free throw line with under five minutes left in the fourth quarter of Maryland’s Big Ten conference opener against Rutgers. She took a couple of hard dribbles before finishing inside the paint with a defender on her for a key Terps bucket.

It was the kind of tough play that Maryland made all night to overcome an uncharacteristically poor shooting night from behind the arc. The Terps used a strong defensive showing and a gritty effort inside the paint to defeat Rutgers, 91-87.

Maryland shot just 42.6 percent from the field but grabbed 18 offensive rebounds and made 22 free throws, dominating inside. It proved to be enough to overcome a tight first three quarters. And despite Maryland’s sloppy play in the fourth quarter, it battled enough in the dying minutes to seal a road win.

“For us it’s just kind of staying with that poise and that composure and understanding that those runs are going to come for us,” Frese said. “I thought the team did a great job with that today.”

“I think that’s why we’re never out of the game,” Frese said. “When you talk about how well we can shoot the basketball collectively when we catch fire.”

Collins and Diamond Miller hit threes to kickstart a 14-2 run to open the fourth, and that scoring spree proved to be enough for Brenda Frese’s squad who were outscored 17-9 from that point, but prevailed to win its first conference game of the year.

Collins battled throughout the night. Midway through the second quarter, the redshirt sophomore grabbed an offensive rebound in a crowded lane. She couldn’t quite rise above a crowd of massive bodies. Instead, she threw the ball up wildly, but it still went in. It was the highlight in a career night for Collins, who scored a team and career high 22 points to pace the Terps.

Collins saw a large increase in playing time in Maryland’s first game without freshman phenom Angel Reese, who suffered a right foot fracture early in the Terps’ last game against Towson. And although there were some initial teething problems — including a stretch in the third quarter where Maryland turned it over five times in three minutes — a quick nine-point explosion by Katie Benzan brought the game level at the end of the frame.

For all of the Terps’ turnover issues, they were able to force enough on the other end, forcing 21 giveaways and scoring 22 points off them. It was a bright spot in an otherwise subpar defensive performance for Maryland, who allowed the Scarlet Knights to shoot 58.8 percent from behind the three point line.

The source of Maryland’s defensive woes was guard Arella Guirantes. The Terps had no answer for her, as she scored 18 points in the first half and finished with 33.

“There’s a reason why [Guirantes] picked in the preseason to be Player of the Year,”  Frese said. “She’s just a heck of a plate, she’s really difficult to defend with her shot fakes and up and unders and step throughs. She’s a really really hard matchup.”

And it was Guirantes who offered some late drama. Maryland appeared to have the game sealed at 89-82 with just seconds to play. But Guirantes provided a three point play after a contested layup, then, teammate Liz Martino hit a three-pointer to cut the Terps’ lead to just two.

However, with the game on the line, veteran guard Channise Lewis drained free throws No. 21 and No. 22 of the night for Maryland — putting the game out of reach, and sealing a hard fought road win to kick off a challenging Big Ten slate.