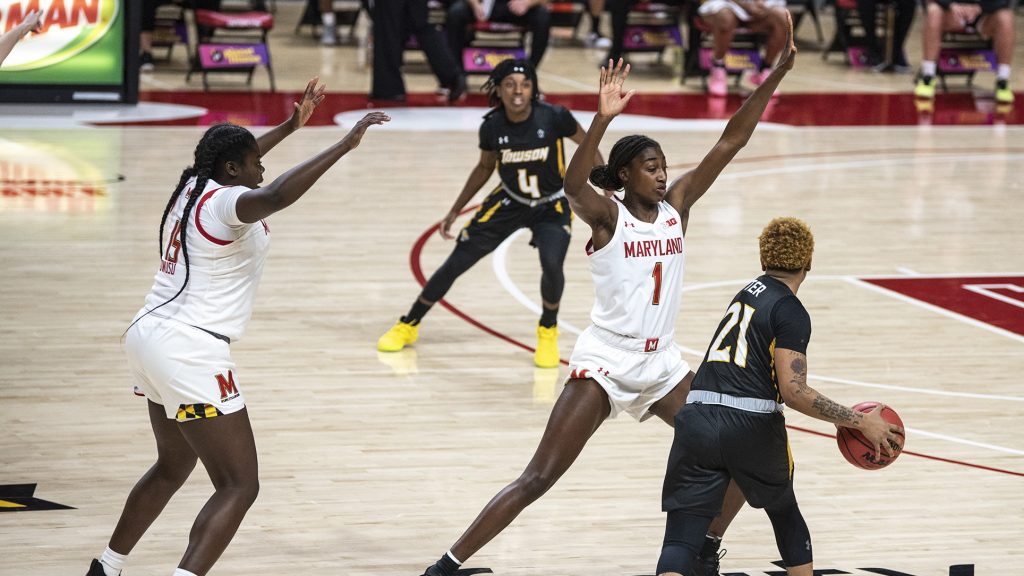 Early in the fourth quarter of Maryland women’s basketball’s matchup against Towson, Ashley Owusu drove to the hoop. She’d regularly gotten to the rim so far, but this time she wasn’t looking to score. With three defenders converging on her, the sophomore guard flung a left-handed pass out to Diamond Miller, who took a slight step to the side before knocking down a three-pointer.

That bucket was one of many from distance, as the Terps drained a program-record 21 shots from long range. Leading that charge were the duo of Owusu and Miller, who carried Maryland in lieu of the injured Angel Reese to a 112-78 victory over Towson.

“A lot of great things when you talk about Ashley and Diamond’s career highs, setting a program record for the most threes in the Big Ten with 21 tonight,” coach Brenda Frese said. “In my time here to see a team go 21-for-31 from the three-point line is pretty special to be able to watch.”

The sophomores were dominant against the Tigers, combining for 53 points and showcasing their abilities as versatile scorers. While the pair had already shown they could score inside the arc, Thursday’s performance was the first game this season either of them had found success from three.

Last year, Owusu shot just 31 percent from beyond the arc. Through the first three games, it didn’t seem like that would change. Coming into the Towson contest, she had only taken two long-range shots this season, and both were misses.

Against the Tigers, last year’s Big Ten Freshman of the Year went 3-of-5 from behind the arc, a career high in makes from deep. Owusu’s threes were almost entirely on catch-and-shoot opportunities. On one of those shots halfway through the fourth, Miller drove to the hoop, created space and threw a pass to a wide-open Owusu, who confidently stepped in and made the three.

That shooting helped Owusu generate other looks as well. Midway through the first quarter, she caught a pass on the right wing and became momentarily open. Owusu shimmied past a closing defender, creating just enough space to elevate and make a mid-range jumper. She finished the game with 25 points on an efficient 9-of-15 shooting.

“We just came out with a lot of confidence and shot the ball well,” Owusu said. “We’re sharing the ball and getting each other open shots, and we’re knocking them down.”

Miller came into the season with less pedigree but the same shooting concerns. Miller shot just 31.5 percent from three last year, and she struggled immensely to start the season, making only one of her first nine attempts.

That changed against Towson. Miller kept bombing away despite her previous struggles, but this time, her attempts began to fall. She went 5-of-7 from behind the arc and finished with 28 points — all career highs. Through four games, Miller is second on the team with 17.8 points per game on 55.8 percent shooting.

“[Miller has] had one of the most consistent preseasons for us when we talk about practices, so I wasn’t surprised,” Frese said. “I thought it was actually uncharacteristic for Diamond and her shooting in Florida, but I think she just needed to get back to Xfinity.”

While most of her attempts were open shots, on one play midway through the second, Miller caught the ball in transition, took one dribble and launched a three with a defender in her face.

“We took easy shots. It wasn’t like our shots we were taking were difficult, they were just wide open,” Miller said.

Miller’s scoring ability from all three levels of the court has been impressive so far this year. Against Towson, she repeatedly used her length to get inside the defense and score at the rim.

With the heralded freshman Reese out, possibly for the rest of the regular season, the Terps will need their sophomore guards to continue their scoring production, especially as a daunting Big Ten schedule looms.

“I explained to both of them when I pulled them out tonight that you have to consistently bring it in for us to be successful this season,” Frese said. “They have to be consistent for us, but I’m excited because these two are winners. They love to compete.”