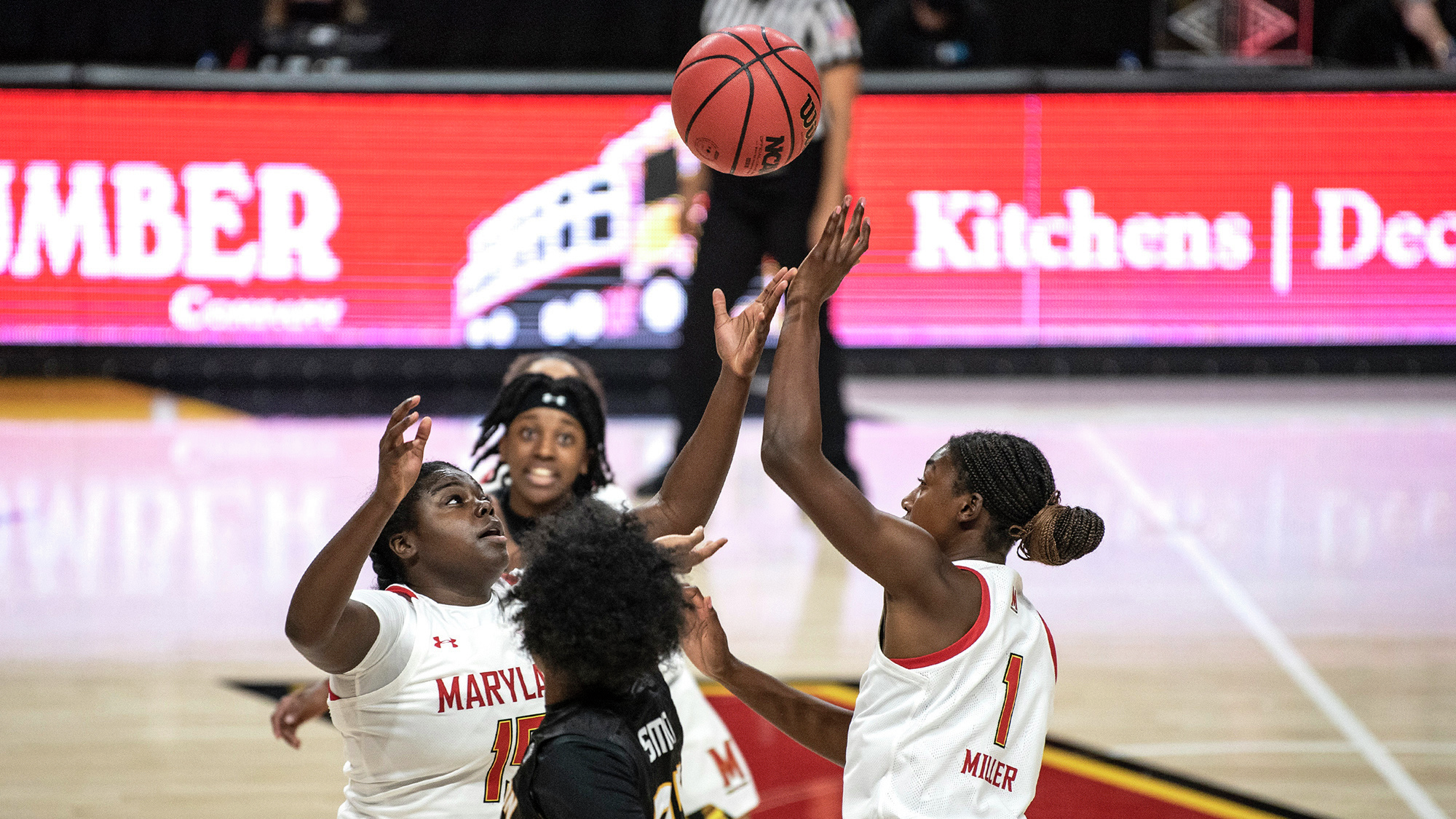 Towson guard Shavonne Smith crossed halfcourt early in the first quarter when she was met with a sea of arms and legs. Maryland women’s basketball’s 1-2-2 press forced her to pick up her dribble, and she was being hounded by Ashley Owusu and Diamond Miller. The duo harassed Kubek until she tried to throw a pass, which Miller promptly deflected and took the other way for an easy layup.

The play was part of a career night for both Miller and Owusu, as the Terps used those career highs in points from both their star guards to a decisive 112-78 victory over Towson Thursday evening.

Maryland’s defense swarmed Towson all evening, limiting the Tigers to 39.5 percent from the field. The Terps had a particularly dominant first half, where they forced all ten of Towson’s turnovers.

In that first half, Maryland’s defense forced Towson to just 34.3 percent from the field and a mere 22.2 percent from behind the arc.

“[We were] trying to give them a lot of different looks,” head coach Brenda Frese said. “I mean you saw that with our full court half-court kind of presses you know, man, zone, you know really not allowing them to stay in any kind of rhythm.”

The guards were integral to that defense, using their length and versatility to wreak havoc in the Towson backcourt. While the steal numbers weren’t gaudy, Owusu finished with two steals and Miller tallied another, their effort and intensity as they picked up ball-handlers didn’t let Towson get into their offense, forcing them to throw up many contested attempts as the shot clock came close to expiring.

“That’s how we always play,” Miller said. “If you look in years past, that’s how Maryland plays D.”

Owusu also delivered on the offensive end. She finished with 25 points, and scored 16 in the first half, punctuated by a graceful buzzer beater to end the second quarter. With just seconds remaining on the clock, the sophomore guard started at the top of the key, where she hesitated before driving hard to the rim. When she reached the free-throw line, Owusu stopped and spun, launching a fadeaway jumper that went in just as the buzzer sounded.

“I explained to both of them when I pulled them out tonight, that you have to consistently bring it in for us to be successful this season,” Frese said. “They have to be consistent for us, but I’m excited because these two are winners, they love to compete.”

Miller also scored a career high with 28 points, and had her most efficient shooting performance of the season. After struggling in the first three games from behind the arc, Miller made five of her seven attempts.

“[The difference was] Playing at home,” Frese said. “You know, she’s had one of the most consistent pre seasons for us when we talk about practices, so I wasn’t surprised. I thought it was actually uncharacteristic for Diamond and her shooting in Florida.”

Despite some turnover issues of its own, Maryland’s offense clicked, as it shot 60.7 percent from the field, including a scorching 67.7 percent from behind the arc. The Terps set a new program record for threes in a single game with 21.

“I didn’t even know we shot that well,” Miller said. “When you’re playing and having fun. You don’t even realize what you’re doing.”

Katie Benzan was the third 20 point scorer on the night for the Terps. She was efficient in multiple facets of the game, making seven of her eight attempts and finishing with three assists.

But her versatility shooting the ball shined through all evening — encapsulated by a sequence at the end of the first quarter. She pump-faked Towson forward Tess Borgosz into the air before lofting a floater through contact over the 6-foot-3 Tigers center Shavonne Smith for the and-one.

“They all can shoot it extremely well and like I said when we’re being unselfish, I mean we’re really hard to guard with, with the way we’re able to spread it” Frese said.

Despite their offensive success, it was Maryland’s defense that created the necessary separation. The Terps forced enough turnovers in the second quarter to establish a double digit lead into the halftime break. And Maryland continued to make things difficult for Towson from there on in. Easy looks were hard to come by for the visitors.

All the while, Maryland continued to fill it up — running away with a comfortable victory in its first home matchup of the year.

“We were just doing what we were supposed to do and we were successful,” Miller said