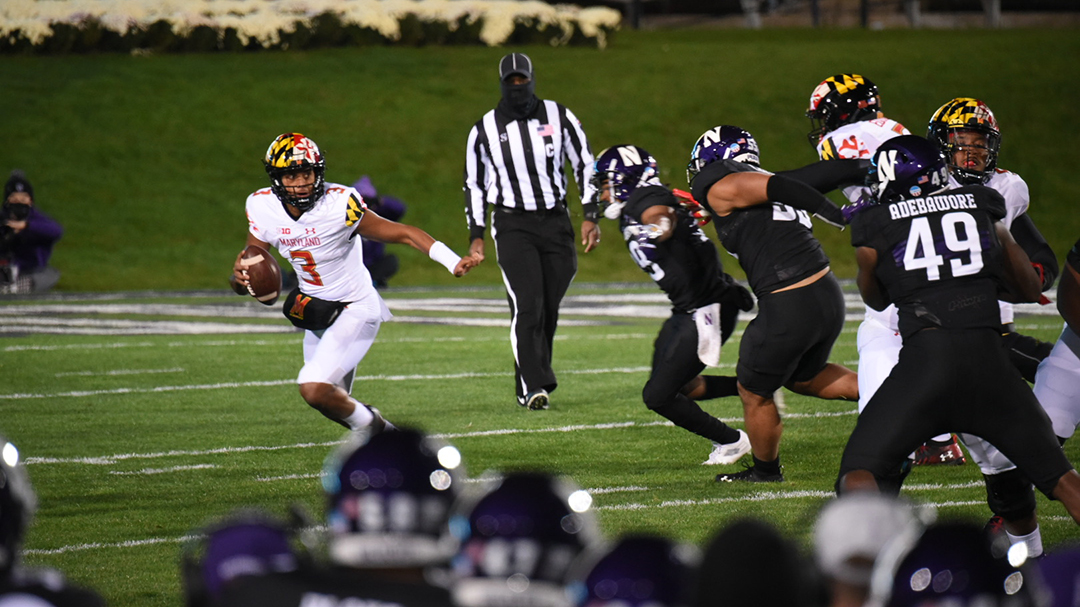 Maryland quarterback Taulia Tagovailoa scrambles away from the Northwestern defense in the Terps’ 43-3 loss to the Wildcats on Oct. 24, 2020 at Ryan Field in Evanston, Illinois. (Evan Robinson-Johnson/The Daily Northwestern)

Taulia Tagovailoa left Evanston, Illinois, with a lot to prove.

After struggling in his Maryland football debut — a 43-3 loss to Northwestern — the highly touted quarterback took full responsibility for the offensive failures against the Wildcats. He said he would begin working to right his wrongs as soon as he returned to College Park and find a way to get the Terps’ offense back on track.

And that’s just what he did.

Tagovailoa arrived at Cole Field House an hour before anyone else Sunday, where he began to study the game film. That initiative impressed coach Mike Locksley, who said he has seen improvements from his sophomore signal caller in the practices leading up to Friday night’s home opener against Minnesota.

“He is one of those guys that treats playing quarterback as a profession,” Locksley said. “He takes copious notes. He’s a studier … He’s a gym rat. He’s always in the office. And that’s the expectation that you … have from your quarterback.”

That was evident to Locksley early in the blowout loss. Tagovailoa scuffled around the pocket throughout the game, struggling to find a rhythm. He finished the game with 14 completions, 944 yards and no scores while throwing three interceptions.

He could’ve let his horrid debut wreck his mindset — instead, he was receptive to the second-year head coach’s advice.

“Coach was just encouraging me to take what they give me,” Tagovailoa said. “I don’t have to make a big play or score on the first play or call a shot play.”

His teammates noticed his maturity and willingness to learn, too.

“He was frustrated, of course, but never got too down,” said wide receiver Jeshaun Jones.

When the Terps returned to the practice field to prepare for the Gophers, Tagovailoa began implementing Locksley’s advice. He kept it simple during his progressions, not forcing a big play or getting too far ahead of himself.

“It’s more about just executing the things the way he’s coached to,” Locksley said. “We call it not abandoning his training.”

And that will be key to maximizing opportunities against Minnesota. The Gophers run an offense built on long, slow drives — the team held the ball for more than 35 minutes last week against No. 13 Michigan — and rarely turn the ball over. Quarterback Tanner Morgan only threw seven interceptions last season while running back Mohamed Ibrahim has never fumbled in college, meaning Maryland will have to capitalize on limited opportunities.

But Locksley is confident Tagovailoa can rise to that challenge and remains fully committed to the sophomore leading the offense against Minnesota.

Now, it’s a matter of the young quarterback proving his coach right.

“He understands playing that position, you’ve always got to bring your A-game,” Locksley said. “I do think [last week] created a little more sense of urgency for him.”