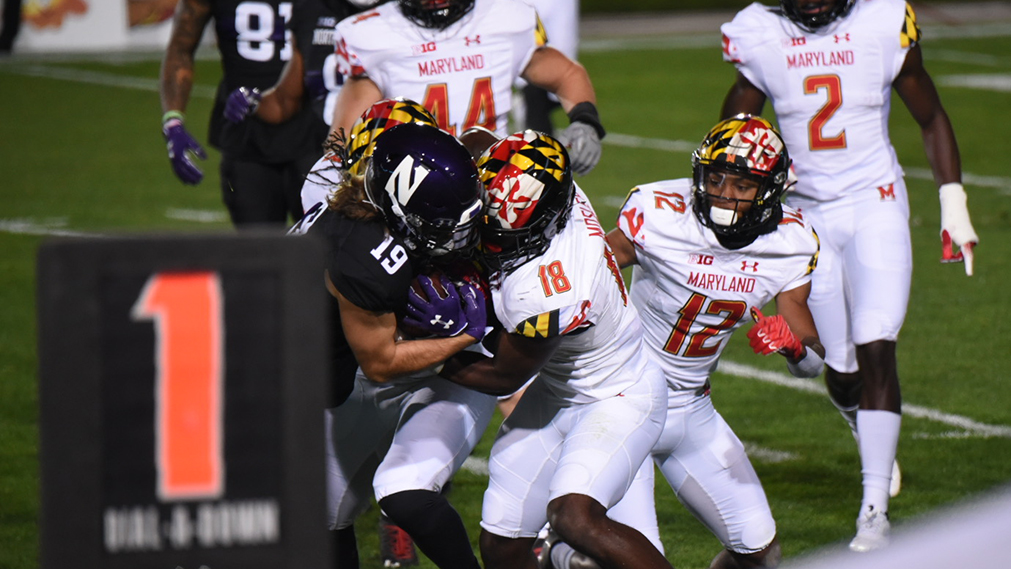 After Maryland scored on its opening drive against Northwestern, the Terps’ defense strutted out onto the field ready to preserve the early lead and hold strong against a Wildcats offense entering with a new quarterback, new coordinator and several unanswered questions.

Instead, Northwestern punched Maryland in the mouth. The Wildcats raced 75 yards down the field and scored in just over four minutes, pushing the tempo and daring the Terps to keep up.

They could not. Maryland seemed caught off guard by the pace all evening, as it struggled to match Northwestern’s urgency, culminating in a 40-point blowout loss.

“It was the first time facing that offensive coordinator,” coach Mike Locksley said. “So a lot of the adjustments were things we had to make on the fly, because we really didn’t have a good understanding [of their offense].”

The Wildcats pushed the pace with a rushing attack led by the duo of Drake Anderson (103 rushing yards, one touchdown) and Isaiah Bowser (91 all-purpose yards and two scores), who effortlessly carved up the Terps’ defense.

And when it seemed Maryland had those two contained, Northwestern quarterback Peyton Ramsey would pull the ball down and take off, exploiting the same holes that Anderson and Bowser found. Ramsey commanded an efficient big-play offense that broke off 10 plays of at least 15 yards, and the Terps simply had no answer.

On the night, the Wildcats totaled 537 offensive yards and engineered eight scoring drives, five of which lasted no longer than 2:35.

“It’s one of those things you have to train yourself, you really got to lock in, you got to get the call, get lined up and get your cleats in the dirt and get ready to play fast,” linebacker Ayinde Eley said. “And you got to do that over and over again on a consistent basis.”

But that wasn’t the case for Maryland, which routinely fell behind Northwestern as it motored into the end zone. Some of that may come from the team’s inexperience in such situations — about half of the starting defense is underclassmen.

But many of the mistakes stemmed from poor communication and a lack of quality gap control.

But those are fixable errors.

“We know what to do, and we know that we’re capable of doing it,” linebacker Chance Campbell said. “So it’s just making sure that we do it more consistently.”

Maryland will have to quickly rectify those mistakes as it prepares for a Friday night showdown with Minnesota. The Gophers also have a new offensive coordinator. But unlike Northwestern, Maryland has a game on film to plan for Minnesota.

The Gophers like to drag the clock out, holding possession for over 35 minutes in their season-opening 25-point loss to No. 13 Michigan. They have a big offensive line that leads a power rushing attack spearheaded by Baltimore native Mohamed Ibrahim, who tore through the Wolverines’ stout front seven to rack up 140 yards and two touchdowns on Saturday.

So while the Terps will take on a much different offense Friday night, Locksley is not forgetting the lessons learned from his team’s opening game thrashing.

“We also have to always be prepared and be able to make the adjustments to handle and manage tempo offenses — we do it against our defense when we scrimmage,” he said.