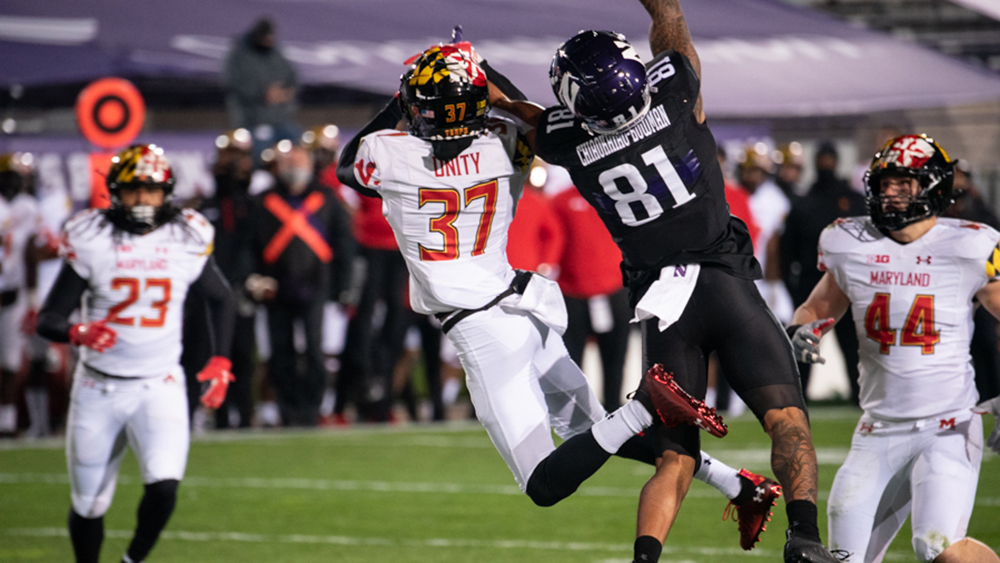 Maryland defensive back Lavonte Gater breaks up a pass intended for Northwestern’s Ramaud Chiaokhiao-Bowman during the Terps’ 43-3 loss to the Wildcats on Oct. 24, 2020. (Evan Robinson-Johnson/The Daily Northwestern)

Partway through the second quarter, Maryland football had a glimmer of hope. Down two scores, the Terps forced a rare Northwestern third down and hoped to make a stand against a Wildcats offense that had torn them to shreds up to that point.

Instead, a series of catastrophic plays commenced.

Northwestern converted the third down. Two plays later, running back Drake Anderson knifed his way through Maryland’s front seven, scoring from 37 yards out to put the Wildcats up 24-3. On the ensuing kickoff, Terps returner Isaiah Jacobs muffed the ball, gifting Northwestern prime field position. Kicker Charlie Kuhbander drilled a field goal soon after, continuing the avalanche of struggles for Maryland in its season opener.

That sequence was emblematic of a season opener in which the Terps looked lost under the lights, falling 43-3 to the Wildcats in Evanston, Illinois.

“Obviously, disappointed in the outcome, not what any of us expected. [There’s] enough blame to go around, offensively, defensively, special teams, coaches all included,” coach Mike Locksley said. “We all have to do better.”

[With a youthful roster, Maryland football looks for confidence and growth]

Despite the lopsided scoreline, Maryland opened in impressive fashion. Taulia Tagovailoa — making his Terps debut after transferring from Alabama in the offseason — completed five passes and marched his team into the red zone. Though the drive stalled, Joseph Petrino hit a 33-yard field goal and put Maryland up 3-0.

But then, the problems began.

Moving with tempo, Northwestern running back Isaiah Bowser carved through the Terps’ defense and capped off a 14-play drive with a one-yard score.

On the ensuing possession, Tagovailoa overthrew Rakim Jarrett for his first pick of the season. Northwestern quarterback Peyton Ramsey continued to mystify Maryland’s defense and scurried into the end zone from 12 yards out, quickly putting Northwestern up 14-3.

“We knew they had the ability to go fast,” linebacker Chance Campbell said. “I think probably something that was a little unanticipated was their ability to change personnel with tempo … but it was good for our defense to see.”

Tagovailoa and the Terps sought to stem the rising purple tide, but two plays into the next drive, the sophomore threw another interception.

“I feel like today I made a lot of mistakes that cost us the game, but it’s a good thing that it’s early in the season,” Tagovailoa said.

Northwestern continued pouring it on from there, showing improvement from last year’s bottom-five offense. Ramsey — a transfer from Indiana — spearheaded the effort, leading four scoring drives in the second quarter. He finished the day 23-for-30 with 212 passing yards, 47 rushing yards and two scores.

Maryland’s defense, meanwhile, showed no signs of improvement from last year’s bottom-of-the-barrel unit. The Terps allowed 537 yards, failing to record a turnover or sack. They were consistently manhandled by a physical Wildcats’ offensive line, while a leaky pass coverage allowed Northwestern’s receivers too much space to operate.

But Maryland’s offense did not provide any counter punches. After gaining 56 yards on the opening drive, the Terps mustered just 115 yards the rest of the way, often going three-and-out. And when Maryland began picking up any sort of positive yardage, it was almost immediately negated by a sack, including a costly 14-yard loss in Wildcats territory.

“I just never felt like, after the first drive, we had any rhythm on offense,” Locksley said. “We’re one of those teams that, when we can play with tempo and we can get up and go, we tend to be able to string plays together. And today, I just felt like the rhythm was off.”

Northwestern entered halftime up 27 and added to the lead to start the third quarter. This time, though, it went slowly. The Wildcats strung together a 17-play drive, eating up eight-and-a-half minutes en route to a seven yard touchdown pass from Ramsey to Bowser. The score seemed to stymie any hopes of a Maryland comeback.

And as the backups began filtering on to Ryan Field, the Terps’ fortunes remained the same. Tagovailoa threw his third pick of the night, erratically tossing the ball into double coverage, and Northwestern promptly drove 93 yards down the field to extend their lead to 40.

As the clock wound down on Maryland’s first loss of 2020, Locksley saw the challenges of this season laid bare. He acknowledged entering the season that his incredibly young and inexperienced Terps squad would face their fair share of challenges, but their mistakes against the Wildcats showed just how much work is left to do.

“All offseason long, we preached and talked about for us to be a good team, we have to play with great discipline, and that means protecting the football,” Locksley said. “We didn’t do that today.”