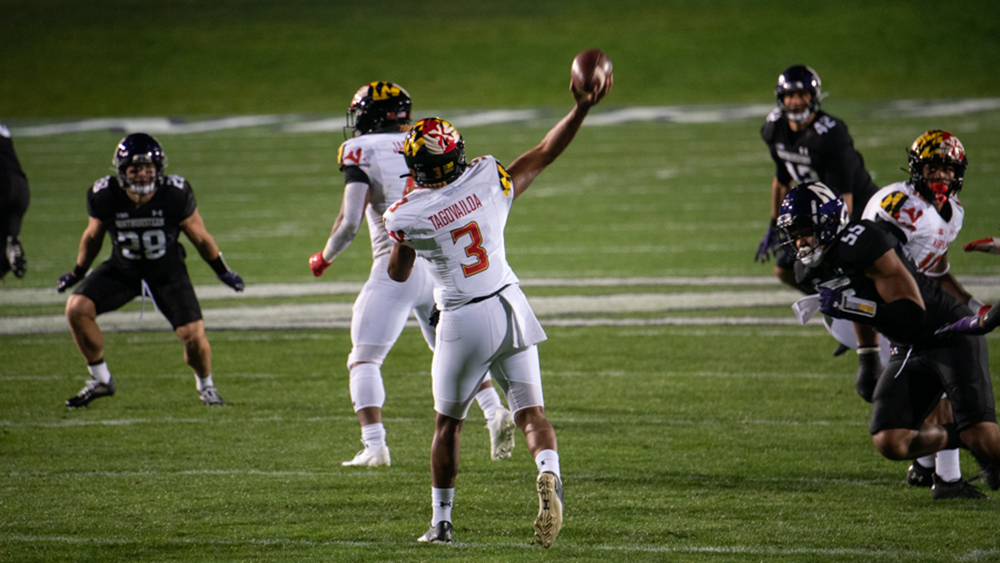 Early in his first career start, Taulia Tagovailoa was looking for a big play. Maryland had just surrendered a touchdown to Northwestern and was facing a third-and-four in its own territory. Seeking to build off an opening scoring drive, Tagovailoa looked down the sideline, setting his sights on a streaking Rakim Jarrett.

Tagovailoa heaved the ball, but it landed in enemy hands. The Alabama transfer overthrew the 6-foot Jarrett, and Wildcats cornerback A.J. Hampton leapt to secure the interception, setting up Northwestern’s offense with good field position.

The Wildcats drove down the field and scored with ease, and the game snowballed from there for Tagovailoa and the Terps. He threw two more interceptions and finished the day with just 94 passing yards and no scores in the 43-3 loss.

“After the first pick, that was a mistake and we try to shake it off,” Tagovailoa said. “After that, it was just me, and I take full ownership of that.”

Those struggles were emblematic of the sophomore’s learning curve as he transitions to full-time starter. Tagovailoa, privately named the starter last week after a preseason-long competition with Lance LeGendre, was looking to show off the talent that injected so much life into a long-suffering fanbase.

Both quarterbacks ultimately saw playing time Saturday, as LeGendre subbed in with the game well out of reach late in the fourth quarter. He completed all four of his passes for 49 yards, and though coach Mike Locksley was impressed with the redshirt freshman’s brief stint, he still trusts Tagovailoa moving forward.

Locksley liked Tagovailoa’s ability to take coaching advice on the sidelines, but he said he wants Tagovailoa to make better decisions under center.

“He’s made some mistakes, he threw the ball into double coverage, he threw the ball down the field in a short situation where we’d like him to take a higher percentage throw,” Locksley said. “But I think some of that was first-start jitters.”

The Terps faced a tough task going up against Northwestern’s defense. The Wildcats returned several key components to their top-25 defensive unit, and their discipline shone through as they locked down Maryland’s playmakers and kept the offense out of rhythm.

Northwestern gave up a mere 207 yards and committed one defensive penalty. And although the unit only sacked Tagovailoa twice, the Wildcats never let him get comfortable in the pocket, their pass rush often forcing a scramble or bad throw.

As the passing attack struggled to take off, the rushing attack was stuffed, putting more pressure on Tagovailoa to come through.

[With a youthful roster, Maryland football looks for confidence and growth]

The 5-foot-11 signal-caller didn’t respond. After leading the initial scoring drive, Tagovailoa missed receivers and had fundamental breakdowns in his quarterbacking technique, he said. Northwestern’s blitz looks caused him some issues, too.

But mostly, the sophomore’s struggles were due to bad communication, Tagovailoa said.

“I just have to get my timing down with the receivers,” Tagovailoa said. “They were there, and I just missed them.”

Tagovailoa’s difficulties were laid bare for all to see. But most of those mistakes are easily fixable, Locksley said. It just takes a little time.

The second-year coach will give him just that. And while it was a difficult opening performance for the much-heralded Tagovailoa, Locksley has full faith that his gunslinger will come around.

“These are things that when you watch the tape … we’ll be able to get these things corrected,” Locksley said. “He’s one of those players that he doesn’t make the same mistake twice.”