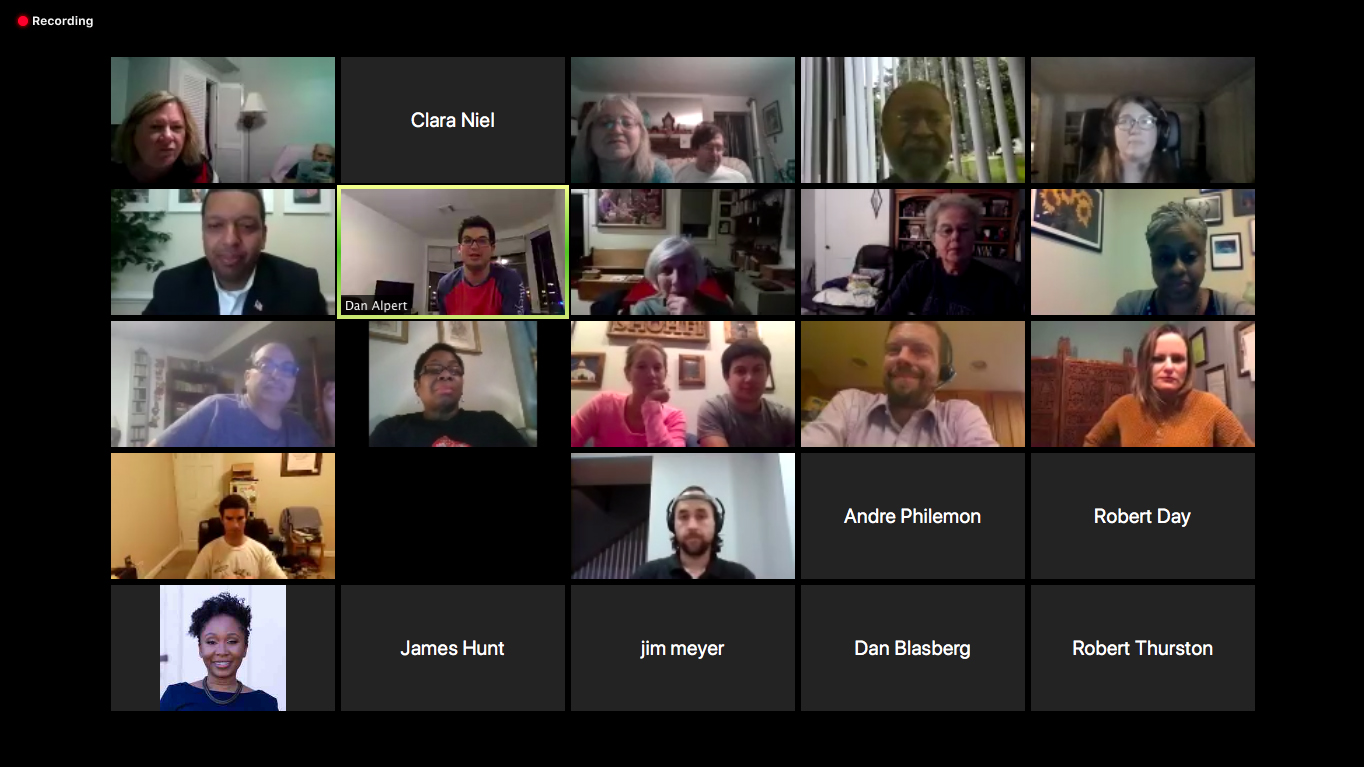 The three candidates for the College Park City Council's vacant District 2 seat participated in a virtual forum on Oct. 15, 2020. (Clara Niel/For The Diamondback)

The three candidates for the vacant District 2 seat in the College Park City Council participated in a virtual forum Thursday night, discussing issues including community policing, property taxes and the coronavirus pandemic.

The candidates — Ron Cameau, Llatetra Brown Esters and Lindsay Dively — are running for the seat left open by former council member P.J. Brennan, who resigned in September. The special election will be held Nov. 8.

City residents asked questions in the Zoom chat or sent them in emails for candidates to answer. Each candidate had two minutes to respond.

At the beginning of the forum, Cameau, a federal law enforcement employee with a focus on cyber crimes, emphasized that crime was too high in the area, and he believed the police should be more visible in the neighborhood.

Esters, the dean of students at the University of Baltimore, felt the problems she had in her community of Oak Springs were similar to Berwyn. She reiterated Cameau’s point on law enforcement and crime, and she added that she is in favor of more business development.

Dively, the community liaison for State Senator Jim Rosapepe (D-Prince George’s and Anne Arundel), agreed with Esters’ about business development, but she said there should be more assistance for businesses in College Park. She has a small business in Laurel that received grants from the city — money that she “simply couldn’t get in the city of College Park.”

Some University of Maryland students are also a part of District 2, said Dan Alpert, Student Government Association president. He asked candidates how they would best support those temporary constituents.

Dively said the government has to get involved with Greek Life organizations, student government and student life activities. Meanwhile, Esters made an emphasis on listening to every resident, whether they are long-term or temporary. To her, being a welcoming place is vital.

“There are a number of people who have lived here temporarily as students, who come back to live and to buy and make College Park their home well beyond being a student,” Esters said.

The conversation later turned to the city’s property taxes. Both Esters and Dively mentioned that in Prince George’s County, College Park has the lowest homeowner property tax. Currently, city residents are taxed at a rate of 32.5 cents per $100 of property value.

Dively said she currently isn’t in favor of increasing the property tax while Esters said she hoped there wouldn’t need to be an increase of property tax, as long as the city remains fiscally responsible.

Cameau also said he wasn’t in favor of raising the property tax, but he understood it was a big part of the city’s revenue. Overall, he believed the tax should be income based, with developers paying more than residents.

“Developers need to ensure that they’re paying their fair share of property tax as well too,” Cameau said. “I shouldn’t be necessarily paying a higher percentage of property tax than our developers.”

One of the final questions dealt with the council’s response to the coronavirus pandemic. Cameau believed law enforcement should play a larger role in enforcing the city’s health guidelines.

Esters applauded the city’s communication to residents on assistance programs during the pandemic. However, she added she wished there had been more mental health services available to residents.

Meanwhile, Cameau and Dively believed the communication of financial assistance programs to businesses was insufficient. Dively said she hoped to form more personal relationships with residents, especially if they don’t understand steps they need to take for financial assistance.