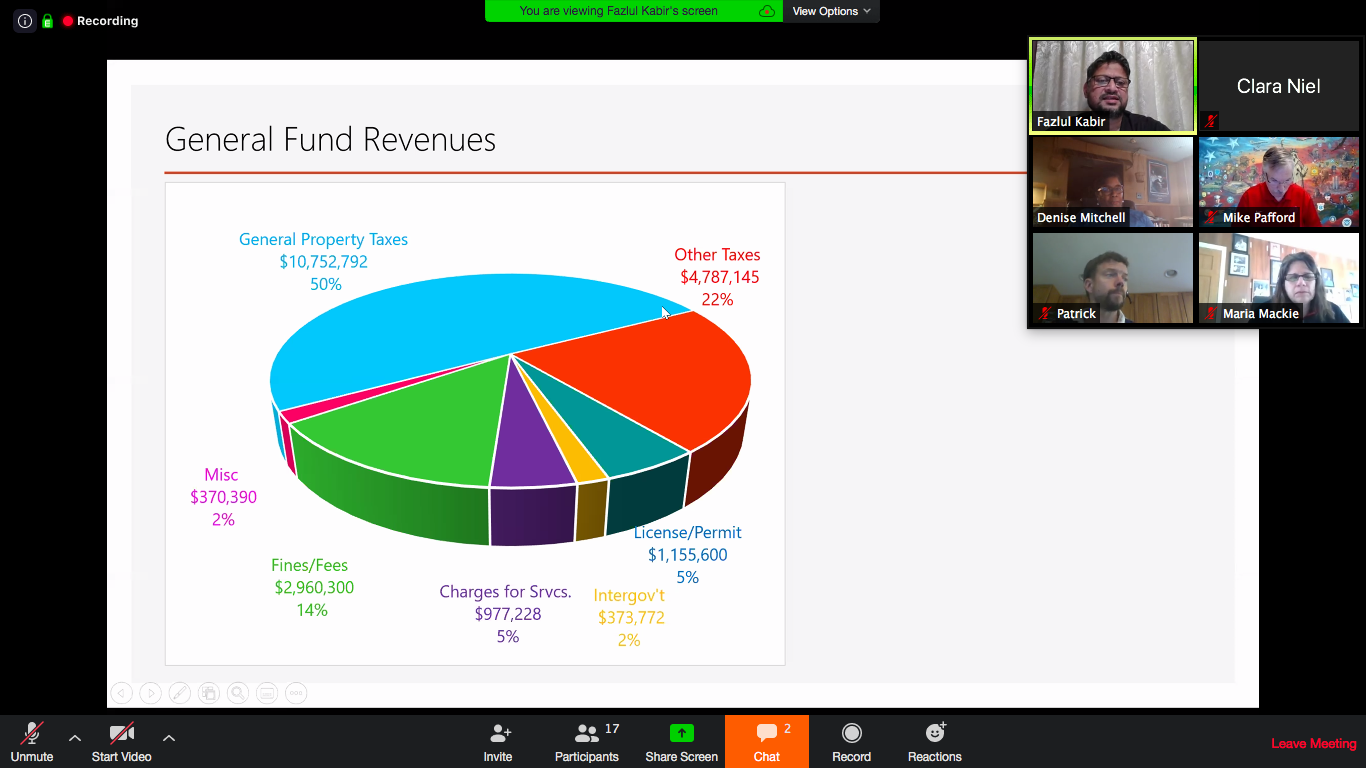 College Park City Council members discuss the proposed budget for the 2021 fiscal year at a virtual town hall on May 9. (Clara Niel/For The Diamondback)

Council members Fazlul Kabir, Denise Mitchell and Maria Mackie hosted the meeting over Zoom to clarify that property tax rates would remain the same under the proposed budget — an issue they said has been a point of confusion for some residents.

Currently, city residents are taxed at a rate of 32.5 cents per $100 of property value, and College Park has a tax base of $2.96 billion dollars. Under the proposed budget — set to be put to a vote on May 26 — the property tax rate would stay the same, but the tax base would increase to $3.06 billion due to new developments being added to the tax roll.

“Many residents have been asking … ‘Is College Park raising [its] property tax rate’? The short answer is no,” said Kabir, who represents District 1.

Last week, the city posted a notice in The Washington Post’s Metro section that detailed a proposed increase to its property tax, prompting a lot of questions from residents. But Kabir emphasized that the property tax rate isn’t increasing next fiscal year. Rather, the city is anticipating an increase in tax revenue.

To offset the increased revenue, the Maryland Department of Assessments and Taxation has recommended that College Park lower its property tax rate to 31.48 cents per $100 of property value, Kabir said, but added that revenue brought in by property taxes makes up about half of the city’s general fund. During its upcoming meeting on Tuesday, the city council will discuss the budget further and consider whether to follow the state’s recommendation.

At the town hall, Kabir noted that College Park has the second lowest tax rate in Prince George’s County. Additionally, he said, the city is still in good shape financially, despite the economic implications of the coronavirus pandemic. The city estimates a loss of $2 million in revenue because of the outbreak, assuming business start to go back to normal this summer, Kabir said, emphasizing that this is a short-term loss.

But many residents participating in the town hall chimed in with concerns about how their tax dollars were being put to use, with some underlining the financial uncertainty brought about by COVID-19.

One resident, Oscar Gregory, took issue with the tax refunds offered to developers by the city. He also outlined the benefits that would come along with lowering property tax rates for residents.

“If you lower the property taxes on residents and put more money in their pockets, they go out and buy stuff from our businesses,” Gregory said. “If you start taking money away from the folks, that means businesses won’t get our money to be able to purchase their goods.”

Gregory also expressed some reservations about the council’s decision to move ahead with the new City Hall project — which relies on taxpayer dollars — when other parts of the city need renovation.

Mary Cook, another College Park resident, agreed with many of Gregory’s points. She pointed out that the city has been doing a lot to help developers in the area — such as offering them tax breaks — but hasn’t been doing the same for residents. She also questioned what residents will gain from the new projects sprouting up in the city that are being funded by their tax dollars.

Another resident, Stuart Adams, said that while the city’s tax rate may bring new amenities to the area, it means that residents could wind up paying more in taxes if they don’t qualify for the state’s homestead tax credit, which limits increases in taxable assessments each year to a fixed percentage. Instead, Adams advised the city to invest more into homeowner tax credit, which would specifically benefit residents.

And Mary King, another resident, pressed city council members to be more proactive in its approach. With many of its residents unemployed due to the pandemic, she worried that the city’s safety cushion won’t be enough to keep it afloat in the coming months.

However, Mitchell said the city would think “very deeply” about how it would proceed if the coronavirus pandemic doesn’t let up by its next financial quarter in September.

“And that’s something that I am going to uphold our city staff in doing and making sure that we articulate that to the residents,” said Mitchell, who represents District 4.