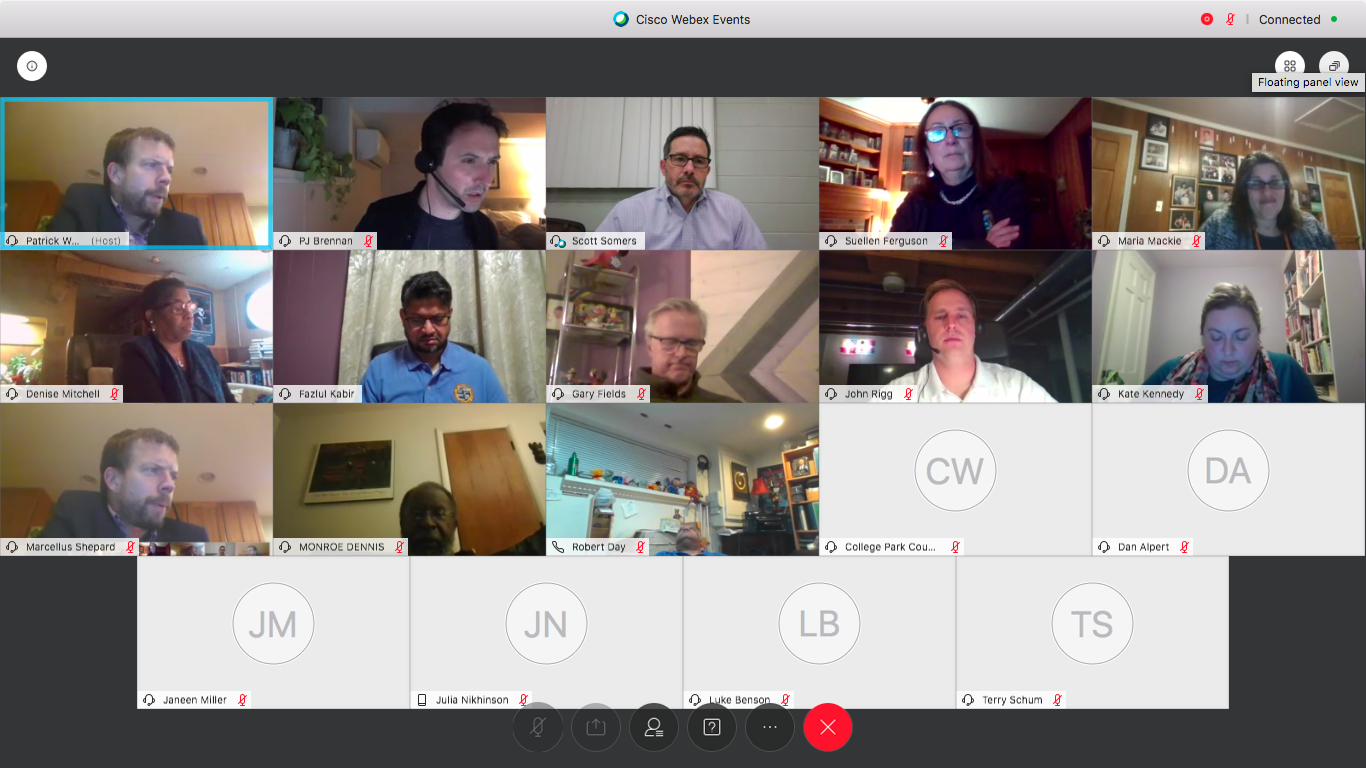 The College Park City Council discusses options for potential emergency assistance to local businesses due to the impacts of the coronavirus pandemic during their virtual meeting on May 5, 2020. (Clara Niel/For The Diamondback)

The College Park City Council explored plans to help ease the impacts of the coronavirus pandemic for local businesses during a virtual meeting Tuesday night.

Local businesses, especially restaurants, have been hit hard by the pandemic, said city manager Scott Somers. After considering a slew of options, council members came away with a new subcommittee that will dig deeper into local business relief, but with little clarity on the proposals’ efficacy.

“Right now, what we’re doing is … an exercise where we’re attempting to throw things at the wall and see if they stick,” said District 2 Councilman P.J. Brennan.

Council members primarily discussed two relief initiatives: one that would delay business license payments — which businesses pay to renew to continue operating — and another that would delay personal property taxes for businesses with fewer than 50 employees.

“At the staff level, we didn’t necessarily feel this would be a huge benefit across the board to businesses throughout the city,” Somers said.

Even though many options were offered to the council, Brennan said there was a lack of real recommendations from city staff. And with the city getting ready to hire an economic development coordinator, council members should table the discussion until they can reassess meaningfully, he added.

District 2 Councilman Monroe Dennis agreed with Brennan, expressing interest in more feedback and guidance to aid in their decision.

“We really need to know whether or not we can do some immediate impact with certain businesses,” Dennis said.

Somers agreed that everything seemed haphazard, but stressed that some initiatives should be carried out sooner rather than later. Although deliberating will produce more concrete proposals, the city must act immediately as well, he said.

In an effort to offer immediate economic aid, the city is already offering free parking in municipal garages, parking lots and parking areas controlled by pay-stations or meters. The city intends to continue this until the start of the University of Maryland’s fall semester, according to city documents.

And delaying or completely foregoing business renewal licenses is another plan that has the potential to be immediately enacted for economic relief, Somers said.

“I do think it sends a nice message and a positive message that the city is interested in people staying afloat and in their business staying in the city of College Park,” he said.

But District 4 Councilwoman Denise Mitchell had concerns with how revenue might decrease if the city decided to delay payments of businesses’ renewal licenses in the 2021 fiscal year.

The delay wouldn’t significantly affect revenue, Somers said, since businesses would still make the payments, albeit later. Forgoing the payments, however, would lead to a significant decrease in revenue of roughly $137,000 a year, he said.

At the end of the section, council members — one from each of the four districts — quickly volunteered to join the subcommittee that would further analyze and solidify initiatives for local businesses.

“For me, the concern that I had …  is knowing really what people need and really meeting the needs of the businesses, and not just doing something because it sounds good but to really know what the businesses need,” said District 4 Councilwoman Maria Mackie.