UMD’s SGA launches impeachment investigation into speaker of the legislature 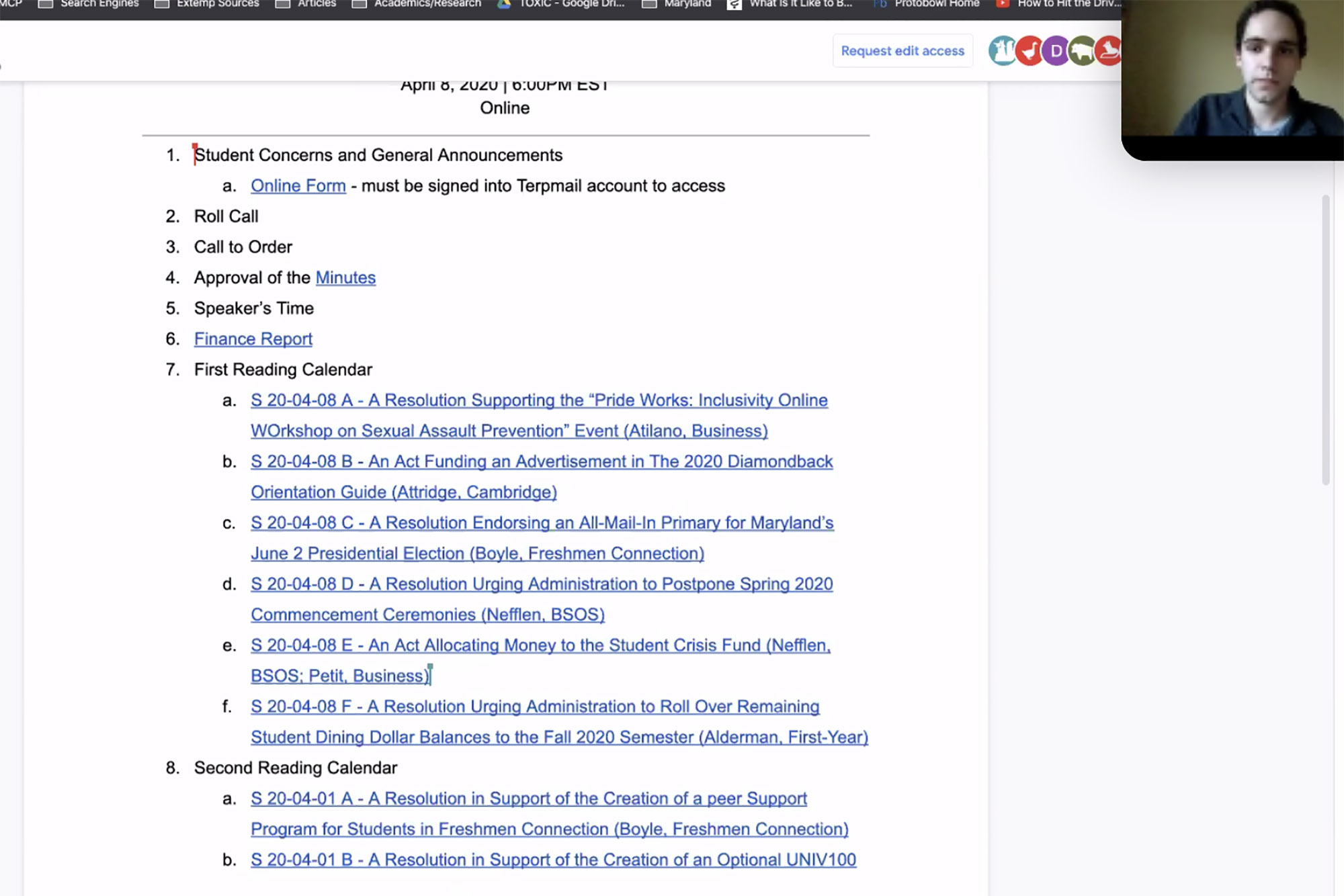 The agenda for the University of Maryland's Student Government Association's virtual meeting on April 8, 2020. (Amanda Hernandez/For The Diamondback)

The University of Maryland’s SGA has opened an impeachment investigation into its speaker of the legislature, David Rekhtman.

Several legislators alleged that Rekhtman has disrespected fellow SGA members, manipulated SGA records and mishandled concerns from the student body. But nearly as many others had no issues with the speaker, and some suggested it was too late in the semester, and too challenging a time, to discuss an impeachment.

After approximately two hours of debate, the body officially launched the investigation with a vote of 18-14 and one abstention.

Even if impeached, Rekhtman, who is also running to serve as the vice president next year, will remain eligible to run, as he has completed the requirements, which include attending 80 percent of the legislative meetings, according to the SGA’s elections rules and regulations.

Some legislators argued that the speaker treated people differently and inequitably, forcing some legislators to work harder to have their voices heard.

“I have not felt that I have been given equitable support from the speaker. Part of the speaker’s job as is alluded to in the bylaws and other governing documents is to be neutral and to support all legislators and their objectives, to treat them fairly,” said Alexandra Melinchok, an off-campus outlying representative. “This is not the case. I feel like this line has been crossed multiple times.”

Rekhtman said he’s done his best to have an “open-door” policy, and “create a collaborative working environment.”

[Read more: UMD made the semester pass-fail. The SGA wants the only options to be A and A minus.]

“In terms of personal relationships with people, I do know that many disagree with my philosophies on many things and … that’s often the case when people aren’t willing to look at other people’s perspectives,” he said.

During the debate, a representative said that there has been an accusation against the speaker for modifying attendance records to keep a member of the opposing party from running for this year’s election.

If a candidate is an incumbent, they have to adhere to certain requirements, which include attending a certain percentage of general body meetings and committee meetings, as well as maintaining office hours.

Rekhtman acknowledged that when he sent the records he also offered to send his calculations. He also mentioned that he went through the calculations with Kislay Parashar, the speaker pro tempore.

Some candidates from both parties — Forward Maryland and Impact UMD — were deemed ineligible, Rekhtman said.

While Rekhtman said he did not alter the attendance record, he also acknowledged that he could have made a mistake.

Pontious also raised concern over the committee of accountability and ethics, which the speaker chairs, noting that legislators have not heard back about any reports or findings this past academic year despite the filing of numerous complaints about the conduct of individual SGA members.

“Some of these allegations really get to the core of what makes a good and effective speaker. Ultimately, we’re here to serve students,” Pontious said, adding, “We have … big meetings coming up in the next couple of weeks and it’s really time for the rumors and gossip to stop.”

Legislators said students outside of SGA have also expressed frustration with how the speaker handles student concerns.

Quintin Harry, the North Hill representative, said that the speaker has released contradictory information regarding the ability for students to remain anonymous when they submit concerns about the university.

Harry said the speaker released a document to the legislature which stated that personal information like a student’s place of residence or academic college was never required but was encouraged in order to submit a student concern. But in the past, the speaker has required students to disclose that information both in-person and over the student concerns Google form, Harry said.

Rekhtman acknowledged that while the form does require the student to list their place of residence and academic college, it is so the concern reaches the appropriate legislator. But he said he tells students to “disclose as much or as little information” during in-person student concerns.

“I’m trying to create an environment where the students feel most comfortable,” he explained.

Another legislator also felt that the speaker violated the organization’s bylaws, stating that he specifically violated the civil rights and harassment section of the accountability and ethics handbook.

“SGA members shall strive, to their best ability, to make all members and non-members feel comfortable and welcome in the organization,” the bylaws read.

“This is not just about me having my feelings hurt one day. This is about a pattern of repeated abuse of power,” Melinchok said.

To Cambridge representative Maggie Attridge, the motion to open the impeachment investigation came as a complete surprise.

Attridge, who also serves as the coordinator of recruitment and retention, works closely with Rekhtman and felt that the points made by the affirmative side lacked sufficient evidence.

“We didn’t get the … clear accusations,” she said. “The examples that we got — I don’t see how that could be qualified to remove him from a job.”

Attridge, among other legislators, also felt that the issues brought up during the debate could have been discussed earlier in the year, rather than during a global pandemic.

“Everyone’s at home with their families, people are dealing with remote learning and we are very, very close to being done this semester,” Attridge said. “It just doesn’t seem like it’s the right time to bring this up.”

Members of the committee on accountability and ethics will consider the issues raised and create a report for the legislature to consider at a general body meeting in the next few weeks.

Although the speaker typically chairs that committee, David Polefrone, the SGA’s parliamentarian, will lead the investigation.

The committee could dismiss the charges, but if the committee feels that any SGA bylaws have been violated, the legislature will be able to vote on impeachment. If the speaker were impeached, the issue of removal would be considered by the judiciary.

Despite the accusations against him, Rekhtman said he hopes the SGA can come out of this stronger.

“I am glad that people felt comfortable enough to bring this up. I hope some positive things come out of it,” he said.

CORRECTION: Due to a reporting error, a previous version of this story stated the SGA ethics committee’s report would be completed in one week. The report is expected to be completed within the next few weeks. This story has been updated.