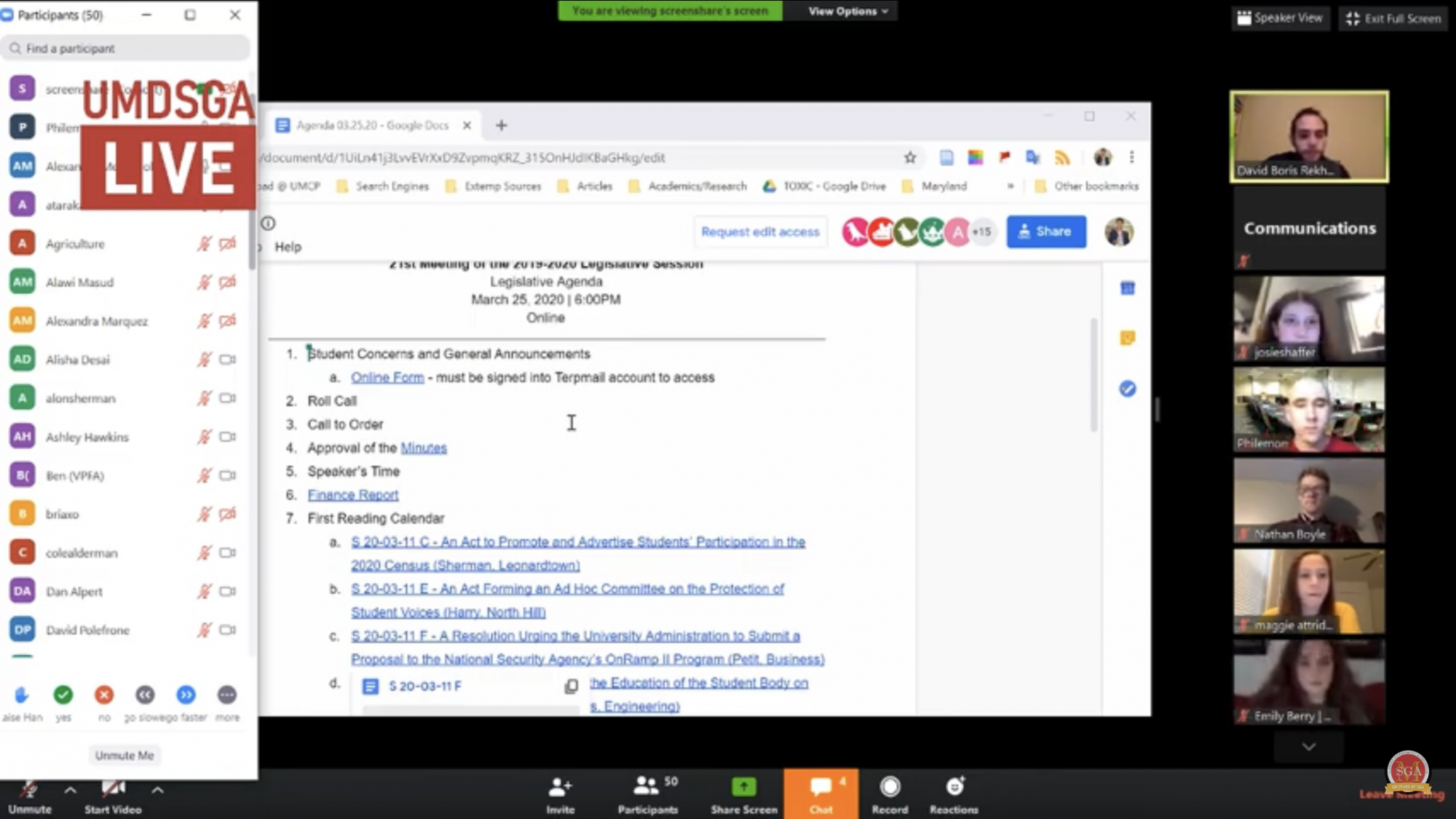 The Student Government Association held their meeting online due to the coronavirus pandemic. (Amanda Hernandez/For The Diamondback)

In a 7-hour virtual meeting Wednesday night, the University of Maryland’s SGA introduced emergency legislation calling for administrators to partially refund student fees and expand resources for students moving off the campus amid the spread of the coronavirus.

Legislators unanimously passed a bill urging the university to refund students for fees that will go unused — such as room and board or parking passes — and overwhelmingly supported a resolution calling for better communication about move-out protocols, which received a vote of 28-0 with two abstentions.

“These are unusual times and it is our job as SGA to urge the university to take extra, or unheard steps to make it easier for students,” said Nistha Mitra, the SGA’s international student representative.

Earlier this week, the Student Government Association launched an online form where a little over 3,100 students shared their thoughts on what policies the administration should implement to better serve student needs, said speaker of the legislature David Rekhtman. The survey asked students various questions about grading systems, optional midterms and finals, fee reimbursement and spring commencement.

Approximately 94.5 percent of respondents supported the university issuing a partial refund for all student fees, including mandatory ones — which pay for things like athletics facilities, shuttle buses and technology services. The SGA’s bill, though, only addressed non-mandatory fees.

[Read more: At SGA-supported sessions, UMD students can learn how to respond to mental health crises]

Legislators are pushing the administration to publicize its plans for reimbursement no later than the end of April.

The body also voted to work with the administration to improve its “communication process, to provide more time for move-out, and to give students more resources to schedule appointments” — a response to a week of shifting guidelines on the topic that left many students confused and frustrated.

On Wednesday, the Department of Resident Life and management from South Campus Commons and Courtyards announced all move-outs from dorms and the apartments would be postponed until further notice — after originally telling students they must schedule a move-out slot and remove their belongings by April 5.

At the moment, only students who received exceptions from Resident Life are allowed to return to the campus and retrieve their belongings.

Before the vote, legislators heard from junior public policy major Kenyatta Thomas, who shared her struggles as an out-of-state student having to fly back home without knowing when she will be able to collect her belongings. She urged the legislators to add a clause specific to students who need storage or emergency housing at a reduced cost.

“A lot of students aren’t able to get back,” she said. “Their stuff is going to have to stay there.”

Legislators eventually passed an amendment urging South Campus Commons and Courtyards to hold off from charging rent to students who need to store their belongings in their apartments or who petition for emergency housing.

Also during Wednesday’s meeting — after approximately four hours of debate — the body rejected a bill that would have urged the administration to implement a pass-fail grading system by a vote of 16-20 with one abstention.

Thursday morning, though, provost Mary Ann Rankin announced all undergraduate courses would be graded pass-fail through the end of the semester, unless students opted to receive traditional letter grades. Passing a class won’t bring up students’ GPAs, but failing a class will bring it down.

Several students who attended Wednesday’s virtual meeting spoke on their concerns regarding the pass-fail grading system, instead advocating for a “Double A” system, under which students would receive either an A or an A-minus for their courses this semester. A petition in favor of that model began circulating Monday, and quickly garnered over 4,000 signatures.

“An Optional Pass/Fail system would put students at a further disadvantage, due to the situation of some students who may need a GPA for this semester, but are unable to perform to their fullest due to a lack of resources or sudden caregiving obligations, which will require them to choose to opt into Pass/Fail due to circumstances outside of their control,” the petition read.

Junior government and politics and public policy major Alysa Conway spoke in favor of the Double A model before the debate.

“As a low-income student with a mental, intellectual, cognitive disability and standing in a large family of five — it will be incredibly difficult for me to stay focused within school and tend to my family’s needs,” she said. “My thoughts go out to the students who do not have the opportunity to choose. Students need grades as much as they need their mental wellness.”

But Shoham Ghosh, the SGA’s Computer, Mathematical, and Natural Sciences representative and bill sponsor, continued to advocate for the pass/fail system. Some students under a pre-med track, like himself, need to build off of skills they learned in previous classes before moving up in order to be successful, he said.

“With the Double A policy under this circumstance, if a student failed, they would actually receive an A-minus and they would be able to move on to the next course, which only delays the failure instead of addressing it when it first occurs,” Ghosh said.

The body scheduled another meeting for Thursday evening to hear a resolution urging the university to reconsider its pass-fail model in favor of the Double A model.