At SGA-supported sessions, UMD students can learn how to respond to mental health crises 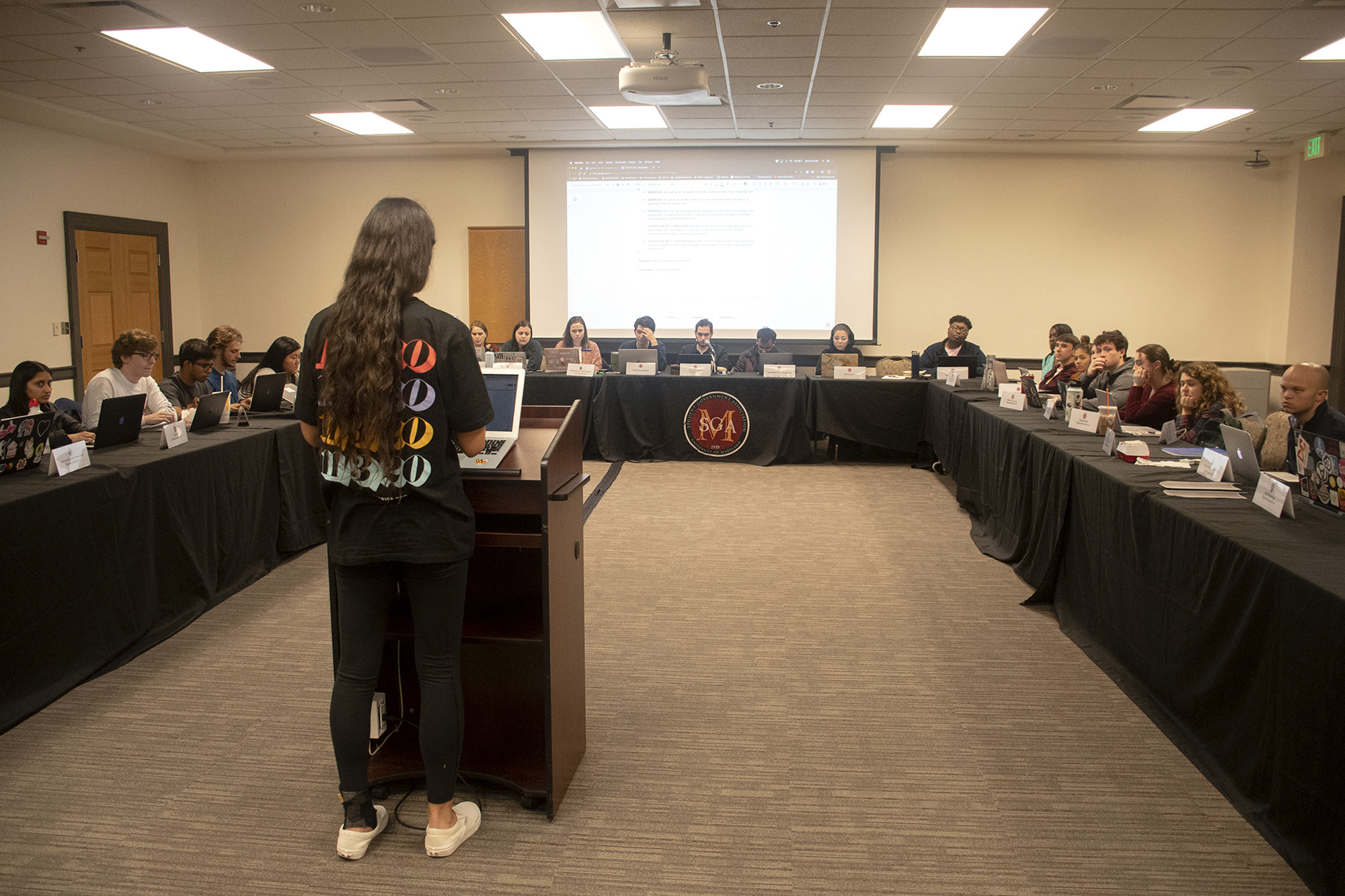 A legislator speaks at the Student Government Association meeting at the Stamp Student Union on Feb. 26. (Susannah Outhier/The Diamondback)

The University of Maryland’s SGA voted Wednesday to help fund and host a training session for emergency mental health aid on the campus in April.

With the Student Government Association funds, the cost of the training session for 30 undergraduate students will be $10 a person — rather than $20. The body passed a similar bill last semester.

Participants are awarded a certificate upon completion of the training — which focuses on teaching students how to properly intervene when someone is experiencing a mental health crisis, such as a panic attack.

“It doesn’t train you to diagnose someone. The point of it is not to make you a therapist or to make you a medical professional, the point of it is to give you the power and the confidence to respond in a crisis situation,” said junior public policy major Colleen Herrmann, the deputy director for the SGA’s Health and Wellness Committee.

The training for undergraduates will take place on April 5 from 8 a.m. to 5 p.m. There will also be a session for graduate students on March 28, and two others for faculty and staff on March 18 and April 17.

Graduate students will also pay the reduced cost of $10, thanks to funding help from the Graduate School and Graduate Student Life. Faculty and staff will still have to pay $20.

To register for the training, students are encouraged to use an online form. The session will be led by Leslie Krafft, the North Campus residential case manager and one of the first people on campus to be certified through Mental Health First Aid USA, an 8-hour course on recognizing and treating mental health emergencies.

The SGA is cutting the program’s cost to undergraduates for the second semester in a row, hoping to make the training more accessible.

“As an undergraduate student myself, I probably wouldn’t even invest $20 into this training, even though I’m very, involved with mental health resources on campus,” explained Kelly Sherman, director of the SGA’s Health and Wellness Committee. “Subsidizing it to $10 is still allowing students to pay for the certification and also just like, actually attend it and like bring it to the broader audience.”

Student groups are currently allowed to request specific training dates, but those cost $20 per person.

In 2018, a study published by the Journal of American College Health found that college students in the U.S. showed higher rates of diagnosis of different mental health conditions than years prior.

The researchers analyzed data from 2009 to 2015, concluding treatment and diagnosis of anxiety increased by about 6 percent. Depression and panic attacks both increased by 3 percent.

During the spring of 2018, a student group at this university, Scholars Promoting and Revitalizing Care, launched “30 Days Too Late,” a campaign focused on spreading awareness of limited mental health resources for students on the campus.

Later that year, SPARC won $5,000 in the university’s Do Good competition and gifted half to the Department of Resident Life to establish the very first training session, which allowed Krafft to receive the training she needed to train others.

The program has also launched its own website, where students can find more logistical information on future sessions in addition to details on what the training will cover and why it’s important to become certified.

“It provides this really amazing opportunity for students to get involved … in a really meaningful way, not only for themselves. I’m someone who’s struggled definitely with mental health crises and issues before, and it’s helped me,” said Alon Sherman, who was trained last semester. “It’s allowed me to give myself to this sort of greater culture around campus of taking care of one another.”