UMD made the semester pass-fail. The SGA wants the only options to be A and A minus. 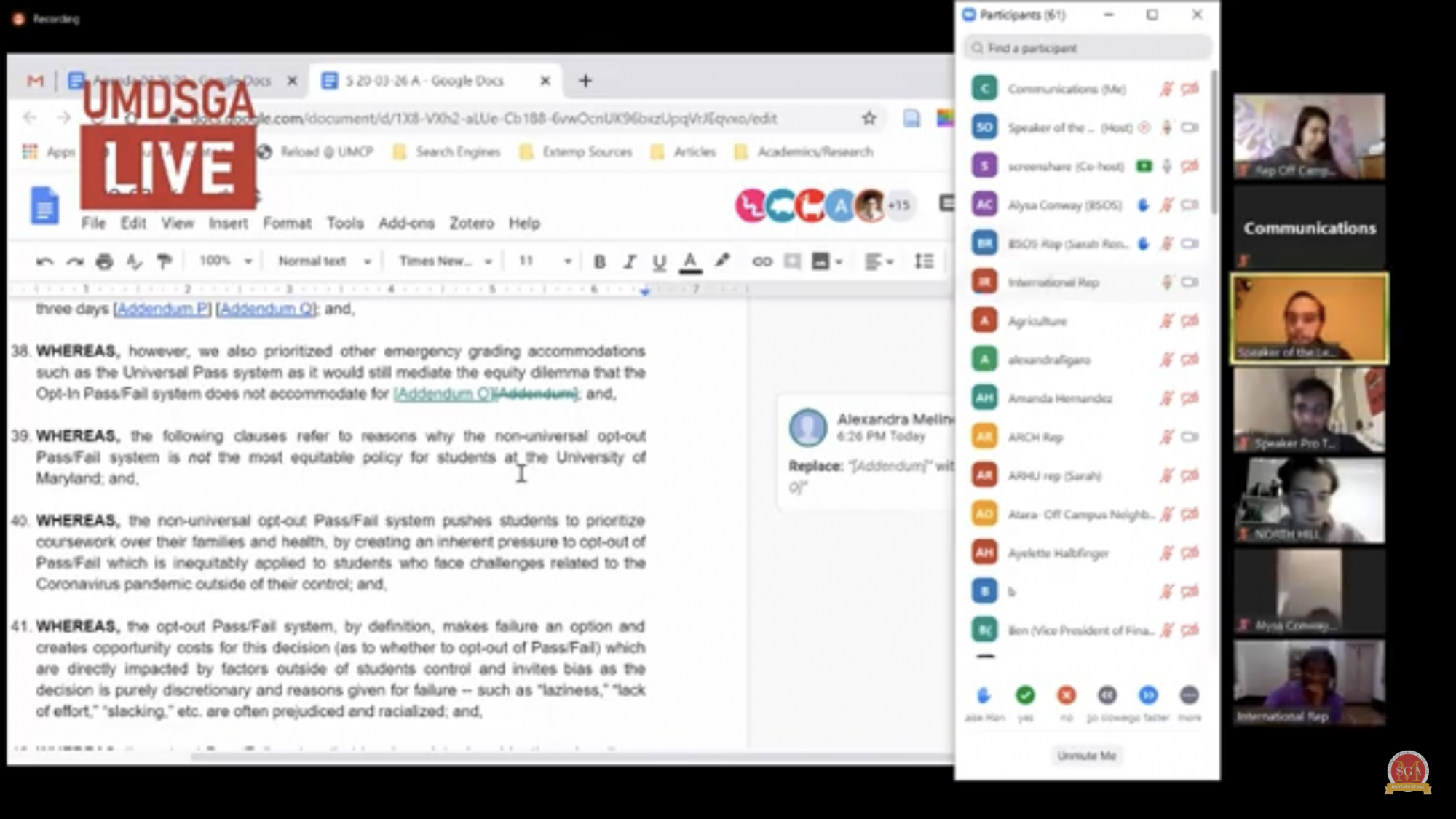 The University of Maryland's Student Government Association held an emergency general body meeting on March 26 in order to propose legislation supporting a "Double A" grading system rather than the university's newly adopted pass/fail one. (Amanda Hernandez/The Diamondback)

Following the University of Maryland’s announcement on Thursday that undergraduate courses will be graded on a pass-fail system unless students opt to receive letter grades, the SGA issued emergency legislation urging administrators to reconsider its decision and give all students either an A or an A- in each class.

After several hours of debate, the bill passed with a favorable vote of 23-13 and one abstention.

“This is a really good example of how SGA listened to students organizing on this campus,” said David Pontious, one of the bill’s co-sponsors, after the vote. “I hope we can keep pushing on this — I reject that this fight is over just because the administration has come out with one policy.”

The “Double A” system, as legislators referred to it, is also gaining traction among students at schools like Johns Hopkins, Harvard and Yale universities. It aims to level the playing field for all students, especially those who are experiencing financial or personal hardships.

The fight for the Double A system began Saturday night in a group chat with over 230 students, which ultimately became See Me UMD, a student task force dedicated to supporting the Double A policy, defending housing rights, supporting low-income or first-generation students and postponing spring commencement.

Students began to mobilize and launched a petition on Monday that garnered over 4,000 signatures soon after its creation.

The students and legislators advocating for the Double A system argue that it is the most equitable, given the extenuating circumstances some students may face as a result of the global pandemic.

“The dramatic shift towards an online learning environment is trivializing for members of the student body, faculty, and staff — ignoring financial implications; mental, physical, intellectual, cognitive, or emotional challenges; sometimes limited access to necessary technology; and compromised availability of resources to meet the needs of the individual and the university community,” the bill read.

During Thursday’s emergency meeting, several students spoke on their concerns against the Double A model, calling it a form of grade inflation and arguing it could harm the university’s reputation or a student’s chance of being accepted into graduate or professional school. Others felt that the Double A model would promote laziness among students and devalue grades.

Despite the initial pushback, some students continued to advocate for the policy — like senior economics major Saba Tshibaka, who recently lost her job as a server.

“People are saying that there are students who are trying to be lazy, or just trying to get a free A and it seems kind of difficult for people to understand that there might actually be people that … are going through some really trying times,” Tshibaka told the SGA.

Off-campus neighboring representative Hannah Kark felt that students looking to enter graduate, medical or law school will be at a disadvantage under a Double A system because students will go on to advanced classes that they are not prepared for.

“If these students are falsely passed through when they don’t actually know more than 50 percent of the material, that’s going to disadvantage them long-term when it comes to their MCATs, or their LSATs, or other tests,” Kark argued.

Opposing legislators also raised concern over passing this bill because it seems unlikely that the administration will reconsider its decision and the passing of this bill could send mixed signals to students.

In response to this, Alysa Conway, the bill’s sponsor and behavioral and social sciences representative, reminded fellow legislators that the SGA must work with the student body, rather than against it.

“I understand that you guys want to be as in-sync with the administration as possible but, we also need to learn when it’s time for us to have our own courage and have our own part with an understanding that we are working for the student body,” Conway said. “It will be a disservice to the students here if we do not support this bill.”

Shortly after the initial debate, legislators then amended the bill, adding that if the university maintains the pass/fail system, the SGA will work with administration to adopt changes based on student concerns.

The SGA is specifically asking for a universally applied grading system, the use of incompletes rather than fails and an extension of the opt-out deadline to be moved after final grades are released.

In addition to adopting the Double A model, the SGA is pushing the university administration to “devote more time into strategizing other grading accommodations that would be more beneficial to the student body as a whole,” according to the bill.