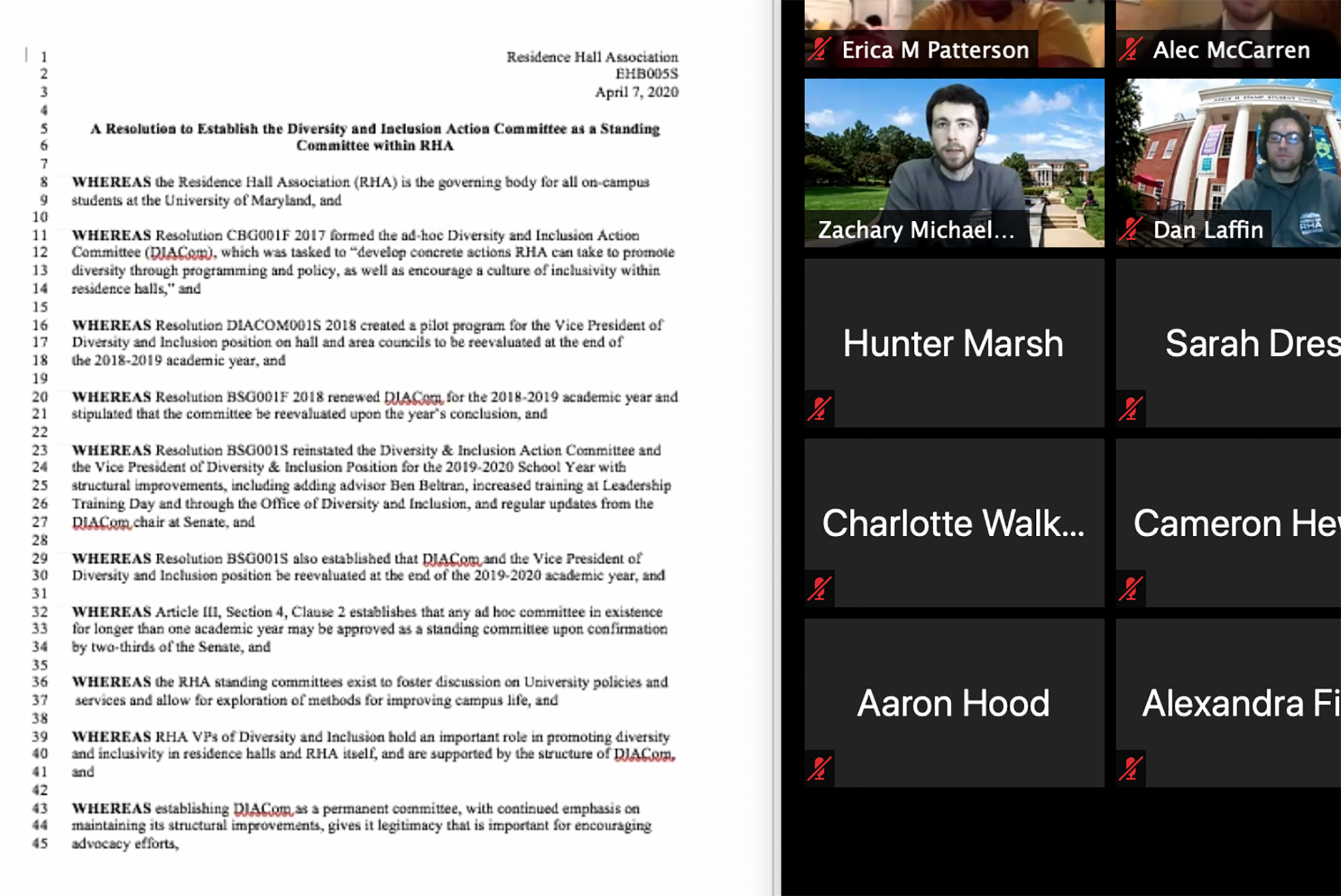 The University of Maryland's Residence Hall Association passed a resolution to establish a permanent Diversity and Inclusion Action Committee at their virtual meeting on April 7, 2020. (Kanika Mehra/For The Diamondback)

The RHA Senate voted in favor of a resolution establishing its current ad hoc Diversity and Inclusion Action Committee as a permanent standing committee within the body Tuesday evening.

The legislation passed with a slim margin, 15-7, with just one vote bringing it over the necessary two-thirds approval from the senate body.

The committee, known as DIACom, was formed in 2017 and intended to promote diversity and inclusivity, according to the resolution.

Its new status, effective next academic year, means it is set to have four senate seats, mandatory attendance and membership, greater collaboration between the DIACom chair and the RHA Senate in addition to making a diversity and inclusion vice president role an official position for all resident councils.

While there was general consensus that improving diversity efforts — both within the organization and across campus — should be a priority for the RHA, several senators disagreed with the decision, citing the committee’s lack of efficacy thus far.

“For a committee to move from ad hoc to standing, they need to show that they are a useful committee and that they are actually changing things on campus and they’re actually benefiting the organization,” said Erica Patterson, a senator-at-large who voted against the resolution. “I just have not seen it yet from the DIACom committee.”

Dan Laffin, who co-authored the resolution creating the original DIACom committee in 2017, acknowledged the lag in the committee’s success since its inception, but said that “simply to say that it’s not going to happen is not going to make it happen, and to take away a tool that may make it easier down the road might be a mistake.”

Emily Berry, RHA president and author of the resolution agreed, saying that this bill was the only way RHA could formally encourage necessary conversations about diversity and inclusion.

“I want the body to make a vote showing what RHA’s priorities are,” Berry said, whose reelection platform includes several outreach initiatives related to including diverse perspectives in the body’s work.

Berry did, however, say that she completely understood that those who disagreed with the bill wanted to see structural changes before officially making DIACom a standing committee, but she hoped that “elevating” its status will bring them closer to those goals.

On the other hand, RHA senator Kenyatta Thomas felt that creating a specific committee for diversity and inclusion would stagnate necessary efforts from the body as a whole, and place the burden on the “handful of people who are assigned to be the diversity officers” rather than encourage a “team effort” from the entire organization.

Thomas, who is involved with the SGA’s DIACom committee, also raised concerns that the committee could be somewhat of a “token,” rather than a mechanism for substantial change.

“I feel like it ends up being like … ‘Oh, look, we’re working on issues of diversity and inclusion’ and we’re not seeing that happen in the numbers and the people who were in the organization,” Thomas said.

Thomas and Patterson both said they also wanted to see greater diversity within RHA itself — a predominantly white organization — before implementing DIACom as a standing committee.

For Thomas, that means year-round outreach to campus organizations of different cultural backgrounds, and “meeting people where they are instead of kind of just expecting people to come to us.”

Thomas said that the RHA should engage with diverse student groups more, such as the Black Student Union and the Muslim Students’ Association.

Berry agreed, saying that reaching out to people with different backgrounds was important to disrupt the ripple effect that develops when students don’t see proper representation reflected in these organizations: