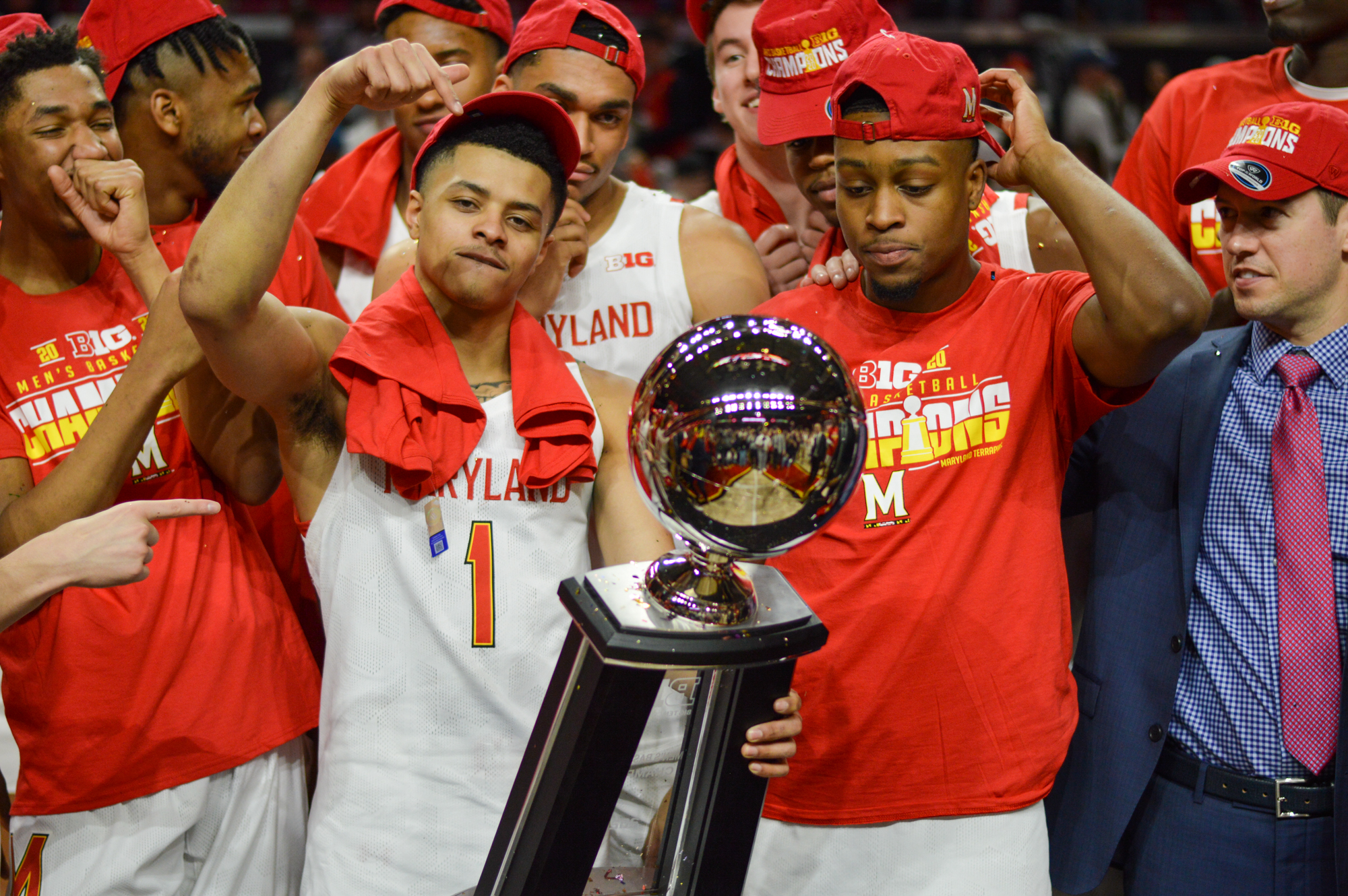 After securing its first ever Big Ten championship, the Maryland Terrapins men’s basketball team had what looked to be a promising postseason ahead of them. Unfortunately, due to the coronavirus outbreak, both the Big Ten Tournament and NCAA Tournament were cancelled.

All of this has left Maryland fans asking: “What if?” What if COVID-19 had not broken out in the United States and the college basketball postseason went on as scheduled?

Luckily, using What if Sports, we can simulate both the Big Ten and NCAA tournaments to see what could have happened for Maryland. In order to ensure the craziness that occurs in March, every game was only simmed one time.

Unfortunately, they do not have a women’s basketball option, so we can’t tell what the Maryland women’s team would have done in the tournament.

After Penn State took care of Indiana, the Terps had their opportunity to avenge an early-season loss. Anthony Cowan and Aaron Wiggins took over in the game, combining for 40 points. The rest of Maryland’s six-man rotation chipped in 38 points, leading the way to an 83-72 victory for the Terps.

Michigan State took out Ohio State, creating the third installment between the Terps and Spartans. This time, Maryland came out on top. Cowan continued to ball out in Indianapolis, leading the way for the Terps with 20 points. Cassius Winston put on a show too, dropping 27 points, but he was the only Spartan to score double figures. Solid complimentary efforts from Wiggins and Jalen Smith helped Maryland win 77-69.

After the Fighting Illini beat Iowa and Wisconsin, they got another shot at beating the Terps. Unfortunately for Brad Underwood’s squad, the third time was not the charm. Cowan capped off a ridiculous Big Ten Tournament by scoring 26 points. Smith’s near-20-20 helped Maryland beat Illinois 82-73 to claim the Big Ten regular season and conference titles.

To try and create the most accurate bracket, we used Bracket Matrix’s rankings for bracketologists. Given that a Big Ten tournament championship likely would have propelled Maryland up to a 3-seed, we used the highest ranked bracket that had the Terps on the No. 3 line.

Kevin Pulsifer, the No. 2 bracketologist on Bracket Matrix, had Maryland as a 3-seed, making his bracket the choice.

Last season, UC-Irvine stunned 4-seed Kansas State in the first round and had upset intentions yet again in 2020. Cowan’s amazing play in the Big Ten Tournament carried over to the first round, as his 24 points helped the Terps narrowly escape the Anteaters with a 77-72 win. Poor three-point shooting plagued Maryland, but it did just enough to move on to the second round.

Maryland nearly had a rivalry matchup with Virginia in the Round of 32, but the Terps faced Cincinnati after the Bearcats took down the Cavaliers, 59-50, in the first round. Cowan’s red-hot play finally cooled off, but Smith turned in a career-high 32 points. Stix dominated Cincinnati, and Darryl Morsell chipped in 15 to help Maryland advance to the Sweet Sixteen with a 78-70 victory.

ETSU took down Illinois and Villanova to get to the Sweet Sixteen, leading to the Terps’ third consecutive game against a double-digit seed. Cowan, Smith and Eric Ayala led the way for Maryland, combining for 43 points. No other Terp scored in double digits, but the trio’s effort was just enough for Maryland to sneak by, 72-70. This marked the Terps’ first trip to the Elite Eight since the 2002 National Championship run.

The Flyers have been one of this season’s must-watch teams. Led by Wooden Award finalist Obi Toppin, Dayton only dropped two games all season, both in overtime. Both offenses were on fire in this game. Cowan, Smith and Ayala once again played out of their minds, scoring a collective 56 points. Morsell and Wiggins added a combined 23 points, which was enough for the Terps to knock off the Flyers, 86-84, and advance to Atlanta.

Elsewhere in the tournament

Since Maryland advanced to the Final Four, I decided to sim every other region, to make a complete bracket. Here’s what happened in each region.

The West Region was absolutely chaotic, with 11-seed Utah State advancing to the Final Four after defeating 5-seed Ohio State, 99-89. Among the upsets in this region was 14-seed Bradley defeating Kentucky, 75-68.

In the South Region, Myles Powell went full “Kemba,” leading Seton Hall to its second Final Four after knocking off Florida State, 96-84, in the Elite Eight.

The winner of Kansas-Maryland will face Seton Hall. After a buzzer beater by Anthony Nelson to force overtime, the Pirates iced the game with late free throws to beat Utah State, 90-88.

The Terps are back in Atlanta, playing in the Final Four for the first time since 2002. Mark Turgeon is facing off against his alma mater. It’s about to be a show.

Cowan led the Terps with 17 points, while the other five of the six-man rotation all chipped in at least nine. Down one with 10 seconds left, Kansas guard Devon Dotson grabbed a defensive rebound. The sophomore, who committed to the Jayhawks over Maryland, held the ball for the last shot. Dotson pulled up from inside the arc and let the ball fly, hitting a shot at the buzzer to end Maryland’s season in a 76-75 game.

Also, if you were wondering, here’s a link to all the scores and some more detailed results from the tournament.