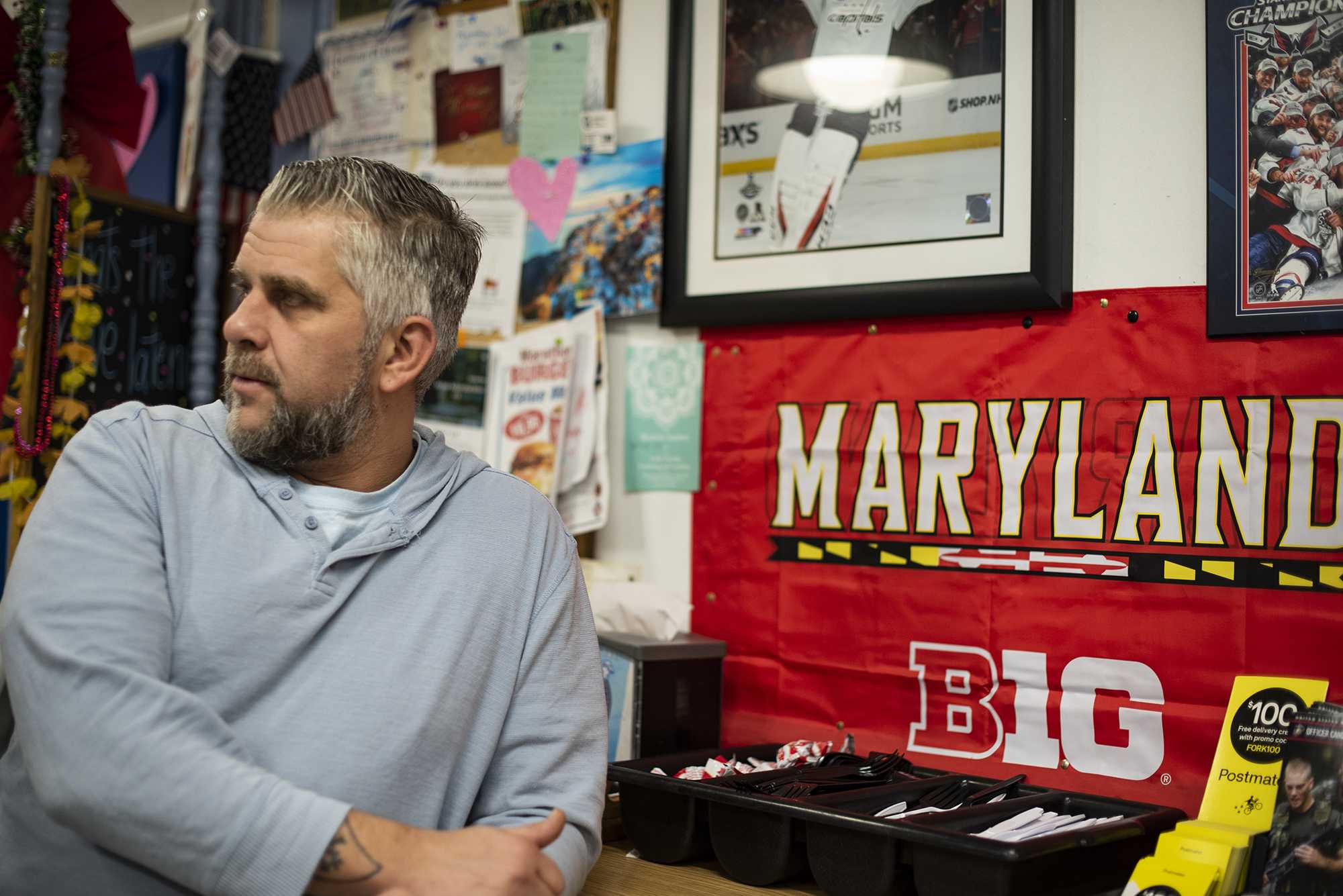 Marathon Deli owner George Soldatos in the restaurant on Feb. 13, 2020. A College Park dining staple, Marathon Deli is among the businesses Greystar is seeking to demolish to build a new apartment building. (Eric Harkleroad/The Diamondback)

College Park’s Marathon Deli will relocate in just over a month, heading to a spot just around the corner from the storefront it has held for more than 30 years.

The deli will take over a storefront next to MilkBoy ArtHouse, previously held by The Red Boat, a Vietnamese fusion restaurant.

The move comes ahead of a redevelopment project that threatens to demolish a strip of the College Park Shopping Center, where the deli is currently housed. It will close its doors at the beginning of spring break and reopen at its new location after the week-long hiatus, owner George Soldatos said.

“I’m just happy we found a place ” said Soldatos, who has owned the deli since 2014. “For a time, we worried that we weren’t going to be able to stay in the area.”

Nothing besides the deli’s physical space will be changing, Soldatos added.

“Not the menu, service or staff,” he said. “Everything is staying the same.”

[Read more: For Ledo’s owner, selling the family business is a “bittersweet” decision]

However, rent for the new space will be higher than it is at his current location, he said. Still, prices for meals — including their gyros and “Marathon fries” — aren’t set to change.

The Red Boat has already moved out of the facility, and the store’s owners could not be reached for comment. Milkboy ArtHouse — which will be the deli’s new neighbor — closed in December.

Sophomore psychology major Jessica Levenson said Marathon is one of her favorite places to go to in College Park, but thought the new location could possibly hurt their sales.

“I would assume they’ll get a little less business, because they won’t be as close to the dorms and South Campus Commons,” Levenson said. “I feel like people are going to be too lazy to make the longer walk.”

Soldatos, though, is excited that the new location puts him closer to the bars in downtown College Park, which he believes will attract more customers. The deli thrives at nighttime from Thursday to Saturday, Soldatos said.

“We’re very thankful for everything [the TDC] has done,” said owner Maria Soldatos. “They gave us all of the details needed for us to secure a new place.”

Katie Gerbes, a development manager for TDC, declined to comment, saying the company is still signing legal agreements. A formal press release pertaining to the project should be released in the next few weeks, Gerbes wrote in an email.

The TDC only works with properties that the University of Maryland sells to them, said Terry Schum, the planning director for College Park. When the university began acquiring property around campus, they created the TDC to help develop the area, Schum said.

[Read more: Construction on community meeting center in College Park set to start in May]

Other shops in Marathon’s same strip, such as Insomnia Cookies and Lotsa Pizza, will also have to relocate or leave before construction begins for the new apartment complex, which is owned by Greystar Real Estate Partners, Schum said.

“Greystar has two big steps to go through: the subdivision application and the detailed site plan. They’ve already completed one,” Schum said.

The detailed site plan hasn’t been referred to the city council from the Prince George’s County Planning Department yet, but it should be submitted before construction starts, she added.

District 3 Councilman John Rigg said he believes small businesses such as Marathon give character to college towns, and he’d like to see them stay amid the economic development happening around the city.

“The reason that Marathon Deli works is because it’s small,” Rigg said. “And it’s the city’s goal to attract small businesses.”

But when private developers buy property in the area, keeping those small businesses around is not completely within the city’s control, Rigg said. That’s why the work of the TDC has been “critical” in making sure small businesses can find a place to move to if they’re displaced, he added.

“We will definitely miss this building,” Soldatos said. “But I think the move will be better for us.”