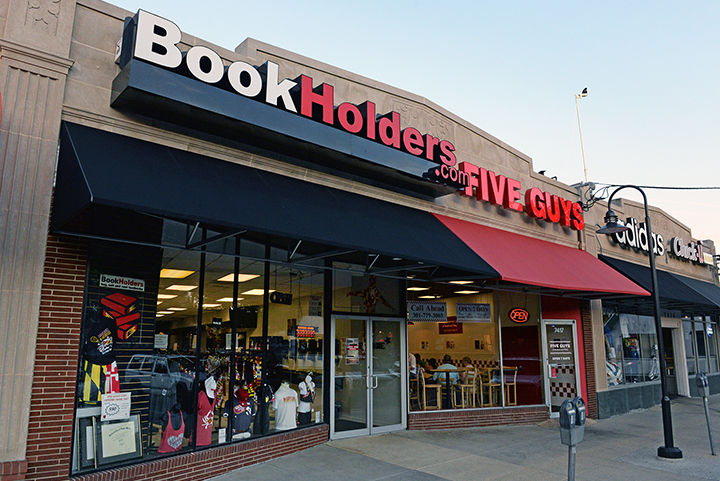 Bookholders and Five Guys at their original locations on Route 1 before both closed in 2018. (File photo/The Diamondback)

It feels like every month brings new loss to College Park, as beloved — or just random — institutions are ripped out to make room for new development crowding Route 1. It’s an emotional ordeal every time; the last days of D.P. Dough saw lines out the door, and MilkBoy ArtHouse disappeared with such little notice that the community was reeling. But maybe a couple years later, the familiar crops up again just a few blocks down; BookHolders and Five Guys have returned to Route 1 after having closed in 2018. It leaves us asking if there was ever a method to this city’s construction madness.

The development and redevelopment of businesses takes resources away from the other problems the city needs space to fix. Habit Burger Grill is nearby and fills the same niche as Five Guys; BookHolders is an alternative to the University Book Center. However, parking remains tight and traffic becomes increasingly congested due to the volume of construction. Affordable housing has a dismal future. And although College Park is finally no longer a food desert, Lidl is still the only affordable and walkable grocery store for many residents.

In 2011, the College Park City-University Partnership set out to make College Park a top-20 college town by 2020. But we’re still seeing orange traffic cones and the promise that improvement is on its way — the assurance that gentrification will one day serve the people who live here, and not just the urban professionals the city wants to attract. Reshuffling businesses and increasing the cost of living through more upscale developments economically burdens residents without creating the sustainable infrastructure to actually make the city more livable.

Development priorities are unclear, as both the process and result are creating more barriers for the community. Several businesses, including BookHolders, left Route 1 because rent “skyrocketed,” but there has been no movement on rent stabilization protections since they were removed for city housing in 2014. It seems there is little power for either residents or businesses to change the trajectory of development, even though it’s not working for either.

Moreover, just because the vision for the future is bright doesn’t mean present damage should be ignored. Much of this city’s population is transient and won’t benefit from the reinstatement of businesses down the line — they’ll only feel the frustration of losing familiar places. College can be a hard transition, and it will only be harder to find comfort in a city in such flux. It likely also sends a message to development companies and businesses that want to work in College Park their presence is precarious, discouraging smaller local businesses from setting up here because it’s harder for them to take the risk.

But the waste associated with construction isn’t just monetary. There’s also material waste, especially with so many developments breaking ground on and off the campus. College Park is ill-suited to handle these projects’ environmental burdens, especially at such high volume, and trying to bring more people into the area before fixing the “invisible crisis” of this university’s deferred maintenance log is inviting disaster. The University of Maryland’s drainage system is already undersized and leads to the Paint Branch Creek choking on debris, and with parts of this campus in the Paint Branch Creek’s floodplain as well, the literal foundations of our city are imperiled.

The stated priorities of the city and this university in creating a metropolis are noble, but they come at the expense of making College Park a home. The economic, social and environmental impacts of present development seem easy to assuage if there was more consciousness about the present than visions of the future. It’s frustrating to see businesses come and go and come back again and not know what it’s supposed to mean. Are these parts of the city meant to be just as transient as the students? Are they a holdover until something more expensive is willing to invest in that space? Will this city ever be for the people who live here, or can we only wait and see?