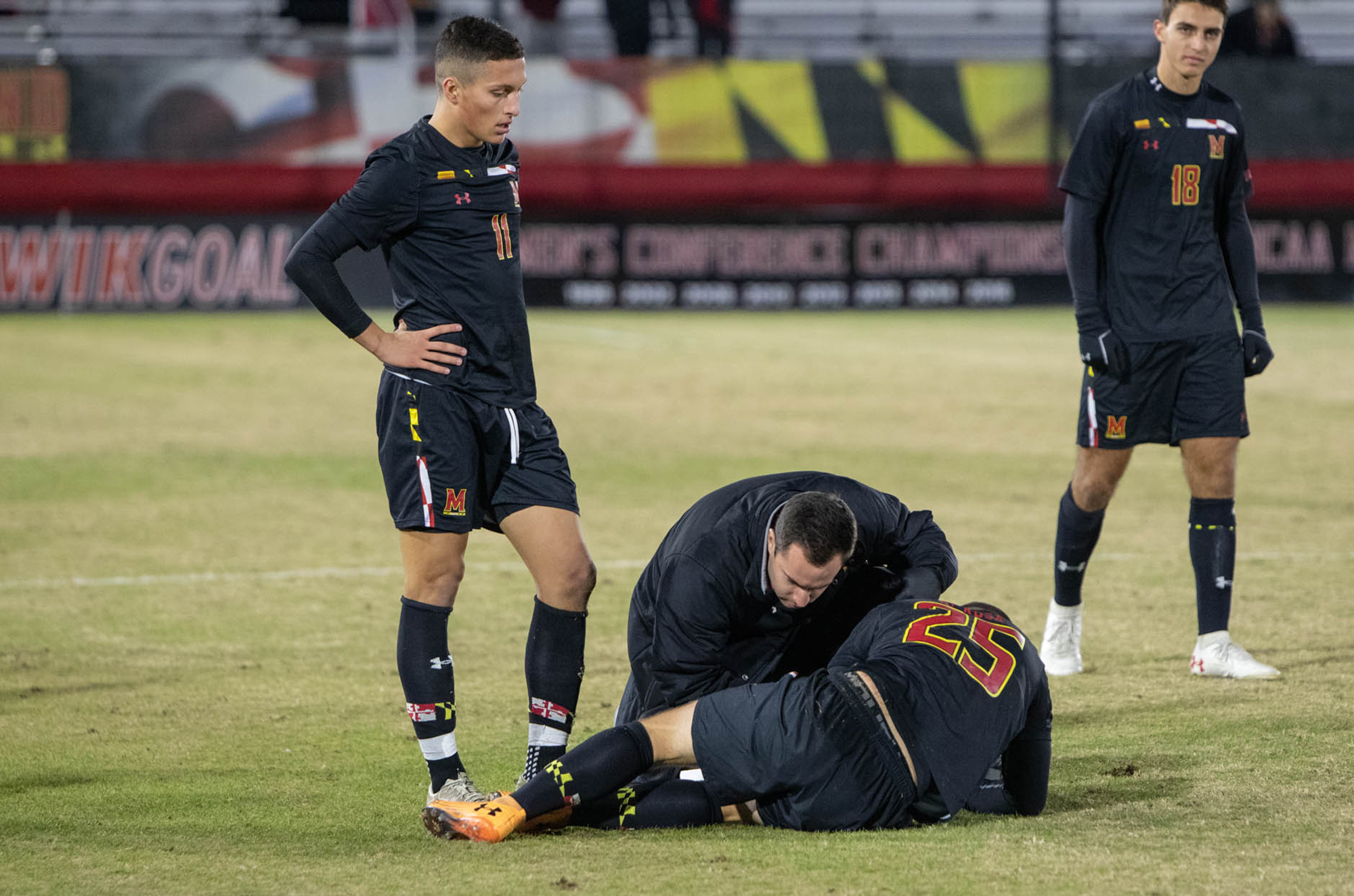 A trainer tends to defender Ben Di Rosa during Maryland soccer's 4-0 win over Iona in the first round of the NCAA tournament on Nov. 21, 2019. (Richard Moglen/The Diamondback)

Coming off a national championship in 2018, Maryland men’s soccer entered the season with a target on its back. The Terps staked claim to the College Cup, and other teams were gunning to unseat them from the top of college soccer.

Maryland, meanwhile, wasn’t focused on defending what it had accomplished a year before — rebounding from a winless four-game start to the season to secure a national championship.

Instead, the Terps were focused on the pursuit of another title. As forward Eric Matzelevich put it in late August, “We’re not defending a national championship. We’re trying to chase one again.”

But as the chase took on the winding path of the season, Maryland encountered an abundance of obstacles in the form of injuries, derailing its pursuit of a return to the pinnacle of the sport.

“Some years you win championships, and you feel incredibly satisfied,” coach Sasho Cirovski said following his team’s 3-0 NCAA tournament loss to Wake Forest. “And some years, you have a team like we’ve had this year, where we’ve taken on the mantle of being the reigning champion, one of the hardest schedules in the country — we stood tall — [and] we lost bodies along the way.”

The Terps lost 10 players from the 2018 roster, including four who were selected in the Major League Soccer SuperDraft. The departures depleted Cirovski’s squad from front to back — including gaping holes at goalkeeper, center back and in the attacking third.

But Cirovski still had two dynamic attacking options in forward Paul Bin and midfielder William James Herve, who each totaled four goals and three assists in 2018.

During a training session in early August, though, Maryland suffered its first setback when Bin tore his ACL.

“Paul’s a unique player. He plays with an incredible amount of enthusiasm and energy,” Cirovski said in August. “He’s the fastest guy on our team, so he can stretch defenses and get in behind people. He also epitomizes how we want to press on the defensive side of things. On top of all that, he’s becoming probably our most inspirational leader. That’s a lot to lose.”

Then, in the 12th minute of their season opener, the Terps encountered another blow as Herve pulled up with a leg injury and left the pitch.

Herve briefly returned three weeks later against Northwestern before tweaking the injury. The sophomore midfielder did not return until a brief cameo appearance toward the end of Maryland’s first-round NCAA tournament win over Iona.

In total, the duo combined to play just 36 minutes on the year.

With those absences, Cirovski needed a new creative option to emerge. Forward Brayan Padilla became that player for the Terps, scoring on a free kick against UCLA and firing home a dazzling outside-the-foot strike against Northwestern.

Over eight games, Padilla evolved into Maryland’s most creative player among a dwindling number of available offensive options. But the sophomore’s breakout season was cut short when he tore his ACL in pregame warmups ahead of the match against Rutgers on Oct. 2.

“We never used those injuries as excuses,” midfielder and team captain Eli Crognale said after the season-ending loss. “We knew we were going to have trouble with the lack of depth. But us captains, we just put our faith in every single player that was on the field.”

Maryland did still find success despite the rash of injuries that decimated the depth of the team. The Terps enjoyed ranked victories over then-No. 9 St. John’s, then-No. 14 Cal State Fullerton, then-No. 6 Indiana and then-No. 24 Yale.

The team’s lack of depth was apparent in other moments, though. Sluggish losses against then-No. 12 Virginia, then-No. 12 Georgetown and Penn State all came after short-recovery periods.

“It’s tough to come out with a lot of energy when you’re having a long day, it’s a long weekend [and] you don’t really have much recovery time,” midfielder Nick Richardson said after the Terps grinded out a tough victory on short rest over Villanova on Sept. 16.

Despite the setbacks and defeats, Maryland advanced to the second round of the Big Ten tournament and gave top-seeded Indiana all it could handle before falling on a penalty kick in double overtime.

In that game, goalkeeper Niklas Neumann, who won an early-season goalkeeper position battle with Russell Shealy and had a standout season to earn a spot on the All-Big Ten second team, made a career-high eight saves to extend the match.

“I felt kind of in a zone,” Neumann said after the defeat. “I didn’t really think about anything else. I mean, it’s always kind of like that when you’re playing. But sometimes, you just feel it a little bit differently — it’s difficult to describe.”

[Read more: With an influx of injuries, Maryland men’s soccer had to rely on depth to top Rutgers]

The narrow loss seemingly cemented the Terps’ fate of being an unseeded team in the NCAA tournament, meaning they would miss out on a first-round bye.

So Maryland welcomed Iona to Ludwig Field and throttled the Gaels 4-0. But the victory came at a cost; the Terps left that match battered with a facial injury for defender Brett St. Martin and a shoulder issue for defender Ben Di Rosa.

The defenders gutted out their respective injuries to start the game against Wake Forest, but both needed longer periods of rest than usual — testing Maryland’s depth further. In the end, the Terps couldn’t breakthrough the Demon Deacons’ defense on the road, surrendering three goals that ended their season.

“Regardless of the chances, any defeat kind of feels the same,” Matzelevich said. “It’s obviously the end of the season, and we don’t want that right now. So we’re going to learn from it and we’re going to come back next year just even stronger.”

Next year, Cirovski’s squad will be without Crognale’s leadership and attacking production (four goals and five assists) and defender Johannes Bergmann’s steady presence on the backline of the defense.

Outside of those two departures — and the loss of Luke Brown, who added a goal in his only season at Maryland after transferring to the program — the Terps are set to return the rest of their roster.

Neumann, St. Martin, Ben and Matt Di Rosa and Richardson form an experienced defense from the midfield back to the goal. And the attack is projected to return its leading scorers in Matzelevich and other goal scorers such as Justin Gielen, Malcolm Johnston and David Kovacic.

Should all go well with their respective recoveries, Bin, Herve and Padilla are also set to provide reinforcements to the attacking third.

“All I can tell you is that we’ll be back stronger next year,” Cirovski said, “and we will be contending.”