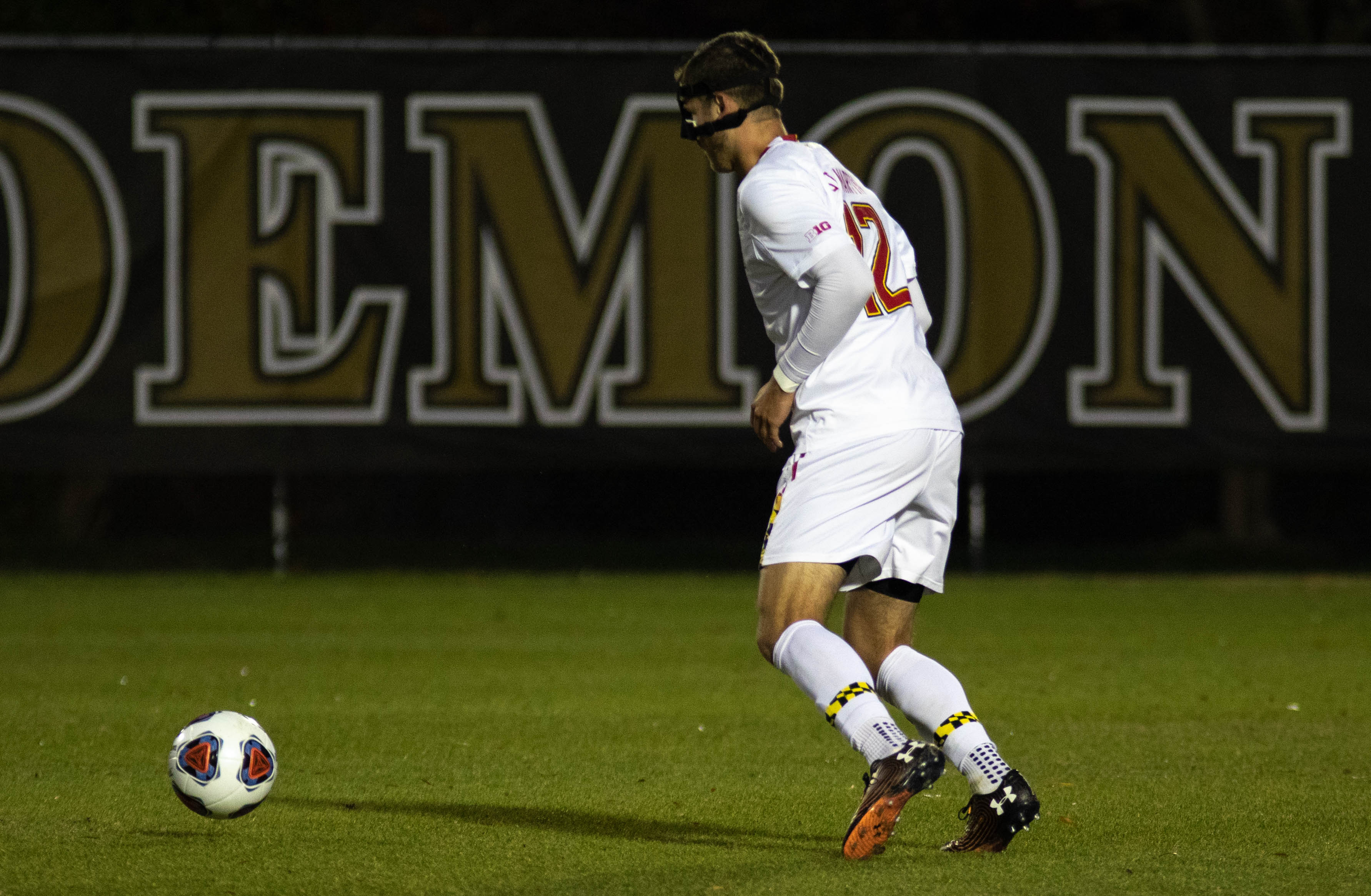 The Maryland men’s soccer team entered Sunday’s match facing an uphill battle against a Wake Forest squad that was fresh off a first-round bye in the NCAA tournament.

The challenge intensified with two Terps players nursing injuries sustained in their first-round match against Iona.

Defender Brett St. Martin wore a mask to protect a nose injury he suffered against the Gaels, and defender Ben Di Rosa couldn’t even manage to take throw-ins because of a shoulder injury he picked up in that 4-0 win.

While Maryland entered the NCAA tournament already depleted, the additional nicks suffered in the first round exacerbated their struggle, hampering coach Sasho Cirovski’s squad in a 3-0 season-ending defeat to the fourth-seeded Demon Deacons.

“As a result, this is what you see,” Cirovski said. “Playing on Thursday and taking a six-hour bus ride in between, and having to patch up shoulders and knees and heads and noses.”

Cirovski continuously shuffled his lineup to account for the fatigue and injuries.

Chris Rindov, a walk-on defender who made the team after a tryout in the summer, played center back for 60 minutes against Wake Forest in St. Martin’s place. Nick Richardson shifted back to the right back position while Di Rosa took periods of rest.

When the match reached the late stages and Maryland tried to find any semblance of a breakthrough, Di Rosa slotted in at the forward spot for the first time all season.

Depth players such as Fola Adetola, Jacob Chakroun and Mike Heitzmann also rotated into the match to try to provide a spark with their relative freshness.

“They gave everything they could, and we couldn’t ask them to do anything more,” midfielder and team captain Eli Crognale said. “It’s just the reality. It’s a tough game sometimes.”

[Read more: Maryland men’s soccer’s international talent has bolstered the team on and off the pitch]

Midfielder William James Herve, one of the team’s top returning scorers from last season, made just his third appearance of the season in the first-round match against Iona. But the sophomore, who has battled leg injuries this season, did not play against Wake Forest.

“You can look across the board. I’m sure Maryland had some guys that they couldn’t use that would’ve helped them,” Demon Deacons assistant coach Steve Armas said.

Both Cirovski and Crognale were quick to say the injuries weren’t an excuse to fall short. But the longtime coach recognized the unfavorable situation that his squad was in and drew positives to how his players responded.

Even through the constantly shuffling lineup, the Terps created opportunities. Forward Luke Brown rang a shot off the crossbar in the first half, and dangerous crosses into the box were spoiled with slight misfires in the final 45 minutes.

Wake Forest tacked on its third goal with just over a minute remaining in regulation to make the final score more lopsided than Cirovski felt the match was.

“We were undermanned for a while. Had to find different ways to patch them on the field, and we fought till the last whistle,” Cirovski said. “We were right in it, continued to fight and scrap and stay in the game and compete. And, as a coach, you can’t ask for anything more.”

Following the team’s huddle, some players lingered on the bench well after their teammates made the trek back to the locker room, their heads hanging in disappointment. But Cirovski offered a more optimistic perspective on the season.

“We didn’t win a championship this year,” he said. “But my kids played like champions.”