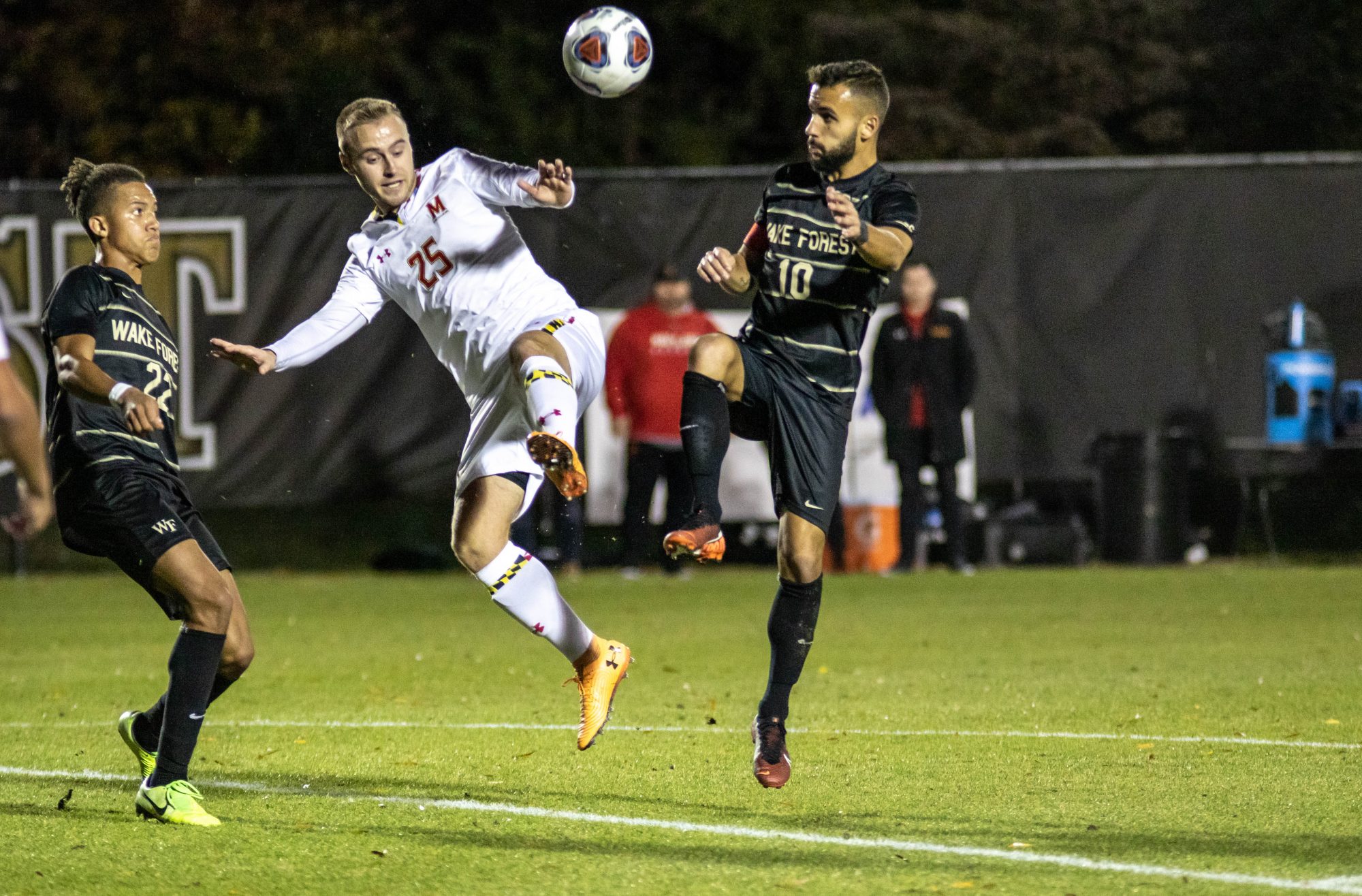 WINSTON SALEM, N.C. — A through pass led Wake Forest midfielder Machop Chol into the box for a one-on-one chance with Maryland men’s soccer goalkeeper Niklas Neumann. Chol decisively fired his shot into the back of the net to stake a 2-0 Demon Deacons lead in the 50th minute.

Less than 10 seconds of game action after Chol’s score, Terps midfielder Malcolm Johnston sprinted into the opposite 18-yard box and accepted a similar leading pass. But Johnston’s shot flew to the center of the frame, where goalkeeper Andrew Pannenberg was stationed to stave off the chance.

The dichotomy between the thrilling goal celebration for Wake Forest and the exasperated reaction from the Terps captured the difference between a team that finished its chances and one that saw dangerous chances go awry. The Demon Deacons finished three of their attempts and won 3-0, ending the Terps’ season in the second round of the NCAA tournament on Sunday night.

“We had two or three high-quality chances that if they go in, the game changes,” coach Sasho Cirovski said. “We maybe didn’t have the legs to keep the ball as much as we normally like to keep it, or maybe the quality or crispness in the final third that we normally do.”

Possession control was split evenly in the first 25 minutes, but Wake Forest took advantage of its time on the ball while Maryland’s attack struggled to create. The Demon Deacons found three dangerous scoring chances early on, yet they squandered those opportunities with mishit shots.

Midfielder Bruno Lapa and forward Kyle Holcomb ran unmarked in the box on two of those attempts, and sent one-time shots wide right. But the Demon Deacons’ luck took a turn in the 26th minute.

Wake Forest sent a corner kick to the top of the 18-yard box, where midfielder Joey DeZart stepped into a strong shot. As the attempt sailed toward his right, Neumann shuffled to that side of the net.

But DeZart’s attempt took a deflection off a Terps defender and fell to Lapa inside the box. With Neumann out of position and unable to recover in time, Lapa capitalized to give the home team a 1-0 lead.

“Those are moments in games where it just energizes the group,” said Wake Forest assistant coach Steve Armas, who was co-serving as acting head coach while Bobby Muuss served a suspension. “For us to get a couple of those chances early, and then to be able to capitalize on that opportunity, I think it just allowed us to push.”

Maryland nearly found the equalizer in the 31st minute when forward Luke Brown received a pass at the top of the box and suddenly turned for a lofted chip attempt. The Terps’ first shot of the game floated toward the goal, but it deflected off the crossbar and out of play.

In the second half, the Demon Deacons harassed Maryland’s backline with a press and forced a turnover. The giveaway catalyzed a quick counterattack that ended with a through pass to Chol, who slotted his breakaway chance past Neumann and into the back of the net.

“We had one sloppy turnover that they caught us on,” Cirovski said.

When play resumed, Maryland immediately got forward, and Johnston received a through pass into the box to create his one-on-one chance that Pannenberg fought off.

As Maryland desperately sought two goals to extend its season at least to an overtime session, the Terps’ attack leaned on its crossing ability to create chances in the second half. Defender Matt Di Rosa saw a header fly just wide of the post in the 65th minute.

Then, in the 83rd minute, defender Johannes Bergmann couldn’t connect on a volley attempt off a cross from midfielder Eli Crognale. Bergmann fell to the field in anguish as the ball scooted beyond the end line.

Wake Forest delivered the clinching blow in the 89th minute with a counterattack that Holcomb finished off, and the forward leapt up onto the wall behind the goal to celebrate with fans.

All season, Maryland talked about pursuing a second-consecutive national championship rather than defending last season’s crown. The Terps’ pursuit of that goal ended as their scoring chances fleeted away repeatedly.

“Regardless of the chances, any defeat kind of feels the same,” forward Eric Matzelevich said. “It’s obviously the end of the season, and we don’t want that right now.”