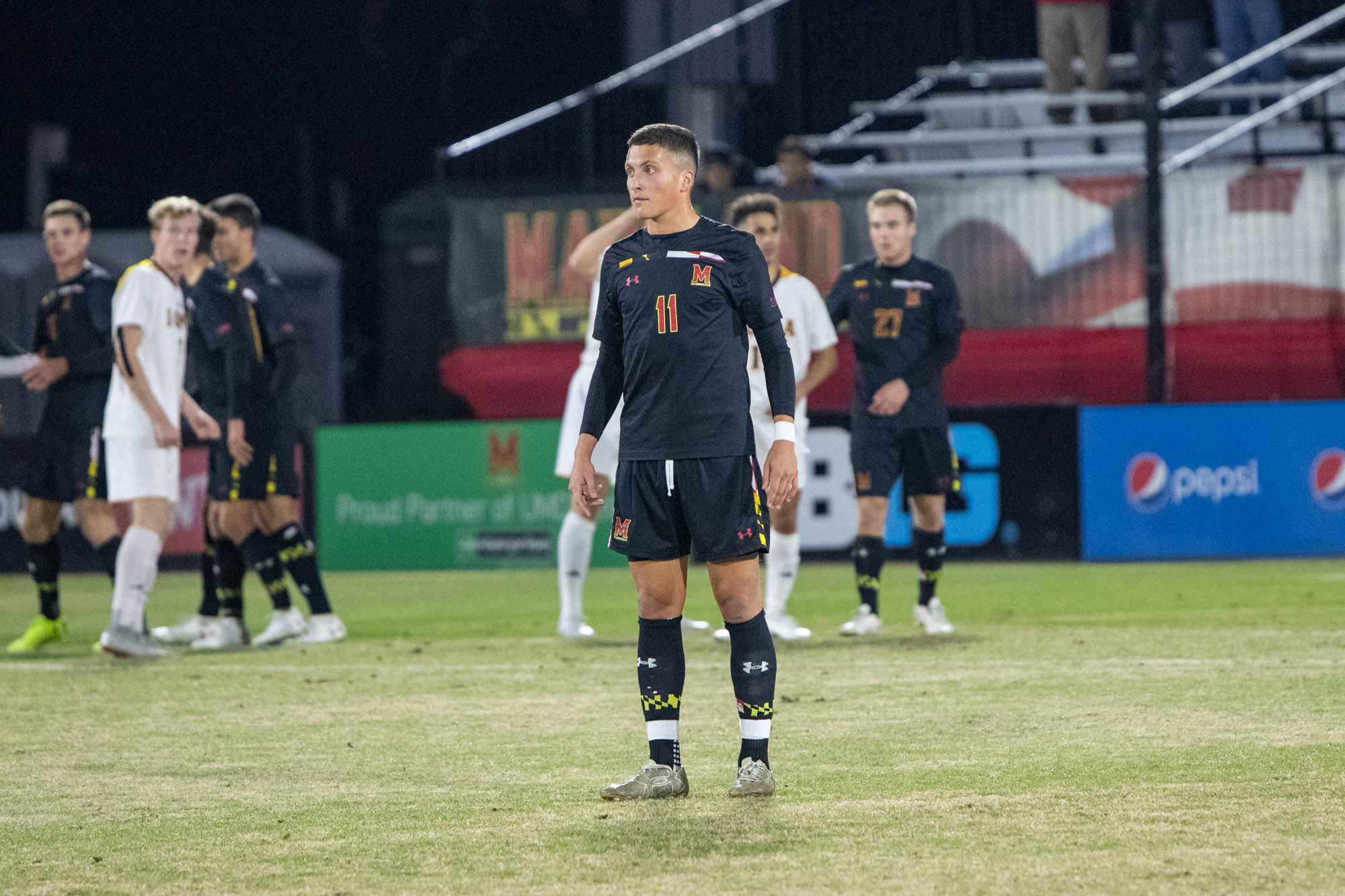 Midfielder Malcolm Johnston stands in space during Maryland soccer's 4-0 win over Iona in the first round of the NCAA tournament on Nov. 21, 2019. (Richard Moglen/The Diamondback)

When the NCAA tournament bracket was announced on Monday, Maryland men’s soccer midfielder Malcolm Johnston saw his team’s selection and potential path, then looked down at his phone.

There was already a text from his older brother, Alistair Johnston, a senior midfielder at Wake Forest — the potential second-round opponent for the Terps.

The two Johnston brothers had played against one another in an organized setting just once before — in an April exhibition game between the Demon Deacons and the younger Johnston’s Canadian club team.

Johnston said his brother’s message encouraged him to take care of business in the first-round matchup. Johnston did just that, adjusting to a position switch in the lineup and scoring the third goal in Maryland’s 4-0 victory over Iona on Thursday to set up a match against his brother on Sunday in Winston-Salem.

“Obviously we can’t look past a team like Iona who just came off a conference win,” Johnston said. “[Playing against him] was extra motivation to get past them and get on to a very, very steep test at Wake.”

Coach Sasho Cirovski altered his starting 11 ahead of Thursday’s match in an attempt to eradicate the possession struggles that had plagued his team in its prior two matches.

In two Big Ten tournament games, the Terps — who pride themselves on controlling possession — were often chasing the game, resulting in a meager five shots on goal the entire tournament.

The 27th-year coach shifted Eli Crognale out of the attacking midfield position — commonly referred to as the No. 10 — and back into the defensive midfielder spot. That move freed up the opportunity for Johnston to slide into his best role, where he’s required to get forward to create opportunities for himself and others.

“That’s a natural position for Malcolm,” Cirovski said. “He finds those deep pockets, he knows how to win second balls and he is very composed on the ball.”

With Crognale occupying one of the two defensive midfield spots, the Terps managed possession better in the middle of the field — which led to quality chances in their attacking third.

Maryland harassed the Iona defense with dangerous chances the entirety of the first-round match, using crosses, transition play, set pieces and deep dribble penetration to notch 10 shots on goal and find the back of the net on four occasions.

“We were always picking it up in the midfield and then running at them,” forward Eric Matzelevich said. “We had our spells of going forward.”

Johnston arrived in College Park with a chance to play in his natural No. 10 playmaking position. But injuries forced Cirovski to get creative with how he deployed his available personnel.

The freshman scored the team’s first goal this season, coming off the bench to lift the Terps to their first victory of 2019 against South Florida. Johnston came off the bench again in Terps’ second game, but he has since started 16 of the team’s past 17 matches and appeared in a number of positions.

“[Malcolm] needs to be on the field. So he’s played the [left wing], [attacking midfielder], [defensive midfielder] — everywhere all over the field,” Cirovski said. “He’s just a really good soccer player.”

Despite the changing positions and roles, Johnston has burst onto the scene in his first season in College Park. The freshman is tied for second-most goals on the team with four, and has shown his playmaking acumen with four assists.

For his fourth goal of the season, Johnston made a run at a loose ball in the box and knocked in a put-back shot to all but seal the first-round victory over Iona. On Sunday, he’ll make a run at knocking off his brother and the No. 4-seeded Demon Deacons in the second round of the NCAA tournament.

“It was super fun to play against him. A bit weird because I know there was a bit of banter going on — a bit of chippiness,” Johnston said. “It’ll be a very intense game, and I’m really looking forward to it.”