As NCAA tournament begins, Maryland men’s soccer knows it must reinvigorate its attack 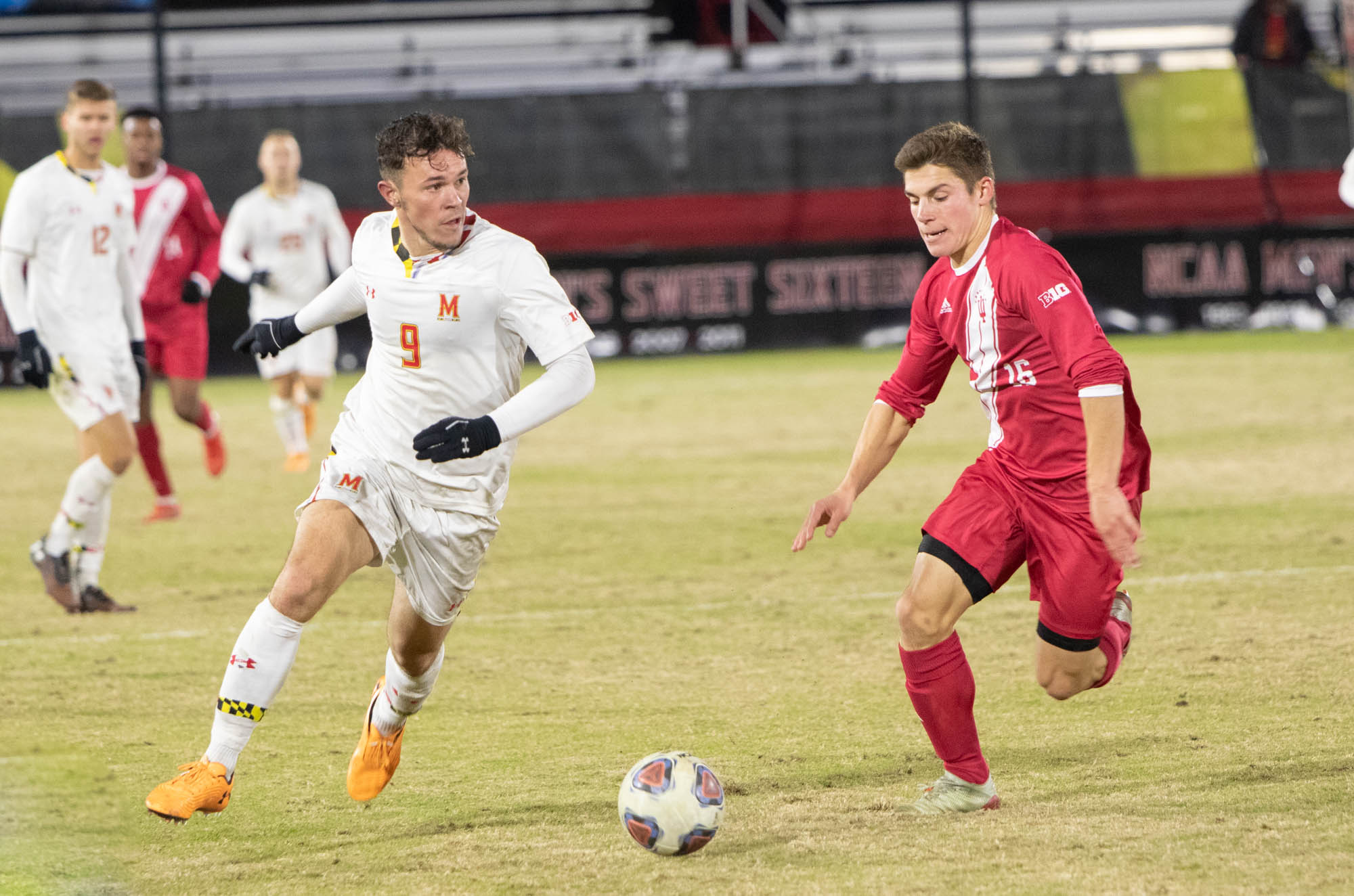 Forward Justin Gielen looks up to pick out a pass during Maryland men's soccer's 1-0 loss to Indiana on Nov. 15, 2019. (Richard Moglen/The Diamondback)

Late in regulation against Indiana in the Big Ten tournament semifinal, a foul gave Maryland men’s soccer one last chance to break a scoreless tie before the match went to extra time.

Midfielder Eli Crognale stood over the free kick from just outside the 18-yard box, and as anticipation rose among the Ludwig Field crowd, Crognale stepped into it. A Hoosiers defender blocked the attempt, though, clearing any potential scoring chance and dashing hopes of a last-second winner.

The Terps’ defense held up its end of the bargain until conceding on a penalty shot in the second overtime, but the attack struggled to maintain possession and create threatening chances.

In its two Big Ten tournament matches, Maryland finished with just one goal — Crognale’s penalty shot against Northwestern. With Thursday’s start to the NCAA tournament, where a loss ends the season, coach Sasho Cirovski emphasized the need for the Terps’ attack to produce; no matter how stout the defense is, a team must score to win.

[Read more: Maryland men’s soccer’s international talent has bolstered the team on and off the pitch]

“You cannot win a game when you don’t score,” Cirovski said after the Indiana loss. “Our issue tonight had nothing to do with defending, it had all to do with possessing and attacking.”

Prior to the offensive struggles exposed in Big Ten tournament play, Maryland had notched at least two goals in four of five games.

But against the Wildcats in Evanston, Illinois, heavy winds held back the Terps’ attack in the first half. Play opened up on the offensive end of the field in the final 45 minutes, but only a penalty shot found the back of the net.

Against the Hoosiers, Indiana seized control of the match from the outset. In a reversal of the 3-0 regular season win for Maryland, it was the Hoosiers constantly testing the opposing goalkeeper. Indiana recorded 12 shots on goal, compared to the Terps’ two.

With the Hoosiers forcing the issue, Cirovski’s team never established the sustained possession it needed to flip the field.

“Since we were defending the whole time, we were more tired and were just kind of getting rid of the ball when we had it because we had heavy legs,” defender Johannes Bergmann said. “It was kind of tough after all the defending to hold the ball.”

As the implications rise in the postseason, Maryland has encountered a higher level of defensive pressure.

“When it gets to tournament time … everyone definitely ups their level and there’s definitely a little bit more intensity to the game,” forward Luke Brown said.

In last season’s NCAA tournament run to the national title, the Terps’ defense was the leading contributor as five straight shutouts paved the way to hoisting the trophy in Santa Barbara, California. But the attack still found opportunistic goals to make those defensive performances stand up.

Ahead of this year’s appearance in the NCAA tournament, which begins on Thursday at Ludwig Field against Iona, the focus has been on improving subtle nuances within the attack.

“We’ve been working a little bit on our spacing and clarifying some of the penetrating options of our front three,” Cirovski said. “I think through video and through training, we’ve addressed a couple key issues, and I suspect we’ll be a little bit better on Thursday.”