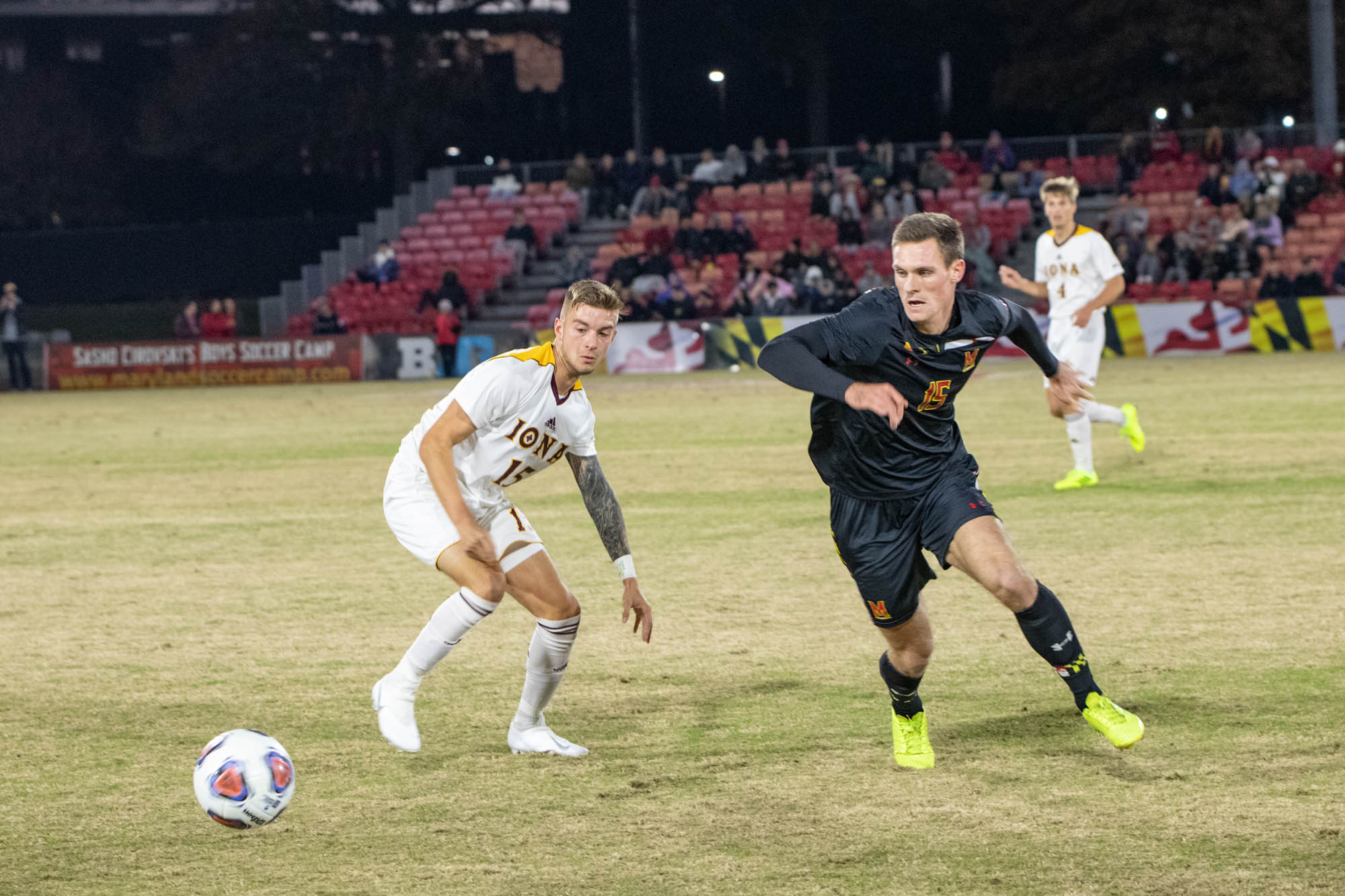 With a chance to put Maryland men’s soccer up three goals with 17 minutes to play, forward Luke Brown ripped an open shot inside the box. Giuliano Santucci stopped the initial bid, but midfielder Malcolm Johnston was in place to slot home the rebound.

After the goal, Johnston lingered in front of the Iona goalkeeper, prompting a frustrated Santucci to shove the forward.

In a match where the Terps rediscovered their offensive rhythm, the shove — which drew a yellow card — was one of the few times the Gaels managed to push back. Johnston’s goal was a clinching blow in Maryland’s 4-0 win in the first round of the NCAA tournament Thursday.

The scoring started in the 19th minute, when defender Matt Di Rosa whipped a cross into the box directed at forward Justin Gielen. Two Iona defenders surrounded Gielen, but the sophomore’s vertical overcame the disadvantage, and he headed a shot across Santucci’s face and into the back of the net.

Iona’s attack entered Thursday’s match without its top scorer Mauro Bravo. The forward, who had 11 goals and six assists on the season, was suspended for the first-round match because of accumulated yellow cards.

In his absence, the Gaels’ attack struggled to maintain possession and create threatening chances. The visitors’ three first-half shots flew well over the crossbar and out of play even as the Terps were without center back Brett St. Martin, who left in the 12th minute with a nose injury.

Defender Chris Rindov stepped into the match and performed admirably in St. Martin’s stead. Rindov found himself squarely in the middle of an NCAA tournament match after pleading the coaches for a chance to tryout at the team’s summer camp.

“It just goes to show you it doesn’t matter how big your resume is or where you come from, if you’re in a position to help the team, you’ll play,” Cirovski said.

Maryland’s attack, meanwhile, strung together better possessions that led to improved productivity from its loss to Indiana in the Big Ten tournament semifinal.

The Terps racked up six shots in the entire game against the Hoosiers, but rebounded with an eight first-half shots against Iona.

“We just got back to what we were doing well three or four weeks ago,” Brown said. “Most of our chances come from how we press, so we pressed really well today and got a lot of chances again.”

Early on in the second half, Maryland found a couple of chances to try to extend its lead. Di Rosa rifled a shot from well outside the 18-yard box, but his attempt just missed over the crossbar.

Minutes later, defender Isaac Ngobu was open for a header in the box, but the cross flew just beyond his 5-foot-7-inch frame.

The Gaels nearly made Maryland pay in the 61st minute. Forward Esad Mackic snuck past the backline and received a pass in stride to earn a one-on-one chance against goalkeeper Niklas Neumann in the box. But Mackic mishit his right-footed attempt and the shot missed wide, wasting Iona’s best look of the night.

Four minutes later, the Terps fired back at Iona. Matzelevich pressed up the field and stepped into his shot from 20 yards out that flew into the upper-right corner of the goal.

Matzelevich’s score put the Terps up 2-0, but it was only the start of an overwhelming final 25 minutes.

“Purely momentum,” Matzelevich said. “We knew we were going to get a second, but it was just a matter of when. Then the rest came after that.”

Maryland continued to apply pressure, and it was rewarded with the put-back goal from Johnston and a penalty kick from Brown — who scored his first goal as a Terp.

The second-half offensive onslaught clinched the victory that propels the Terps into a second-round matchup on the road against Wake Forest on Sunday.