With an influx of injuries, Maryland men’s soccer had to rely on depth to top Rutgers 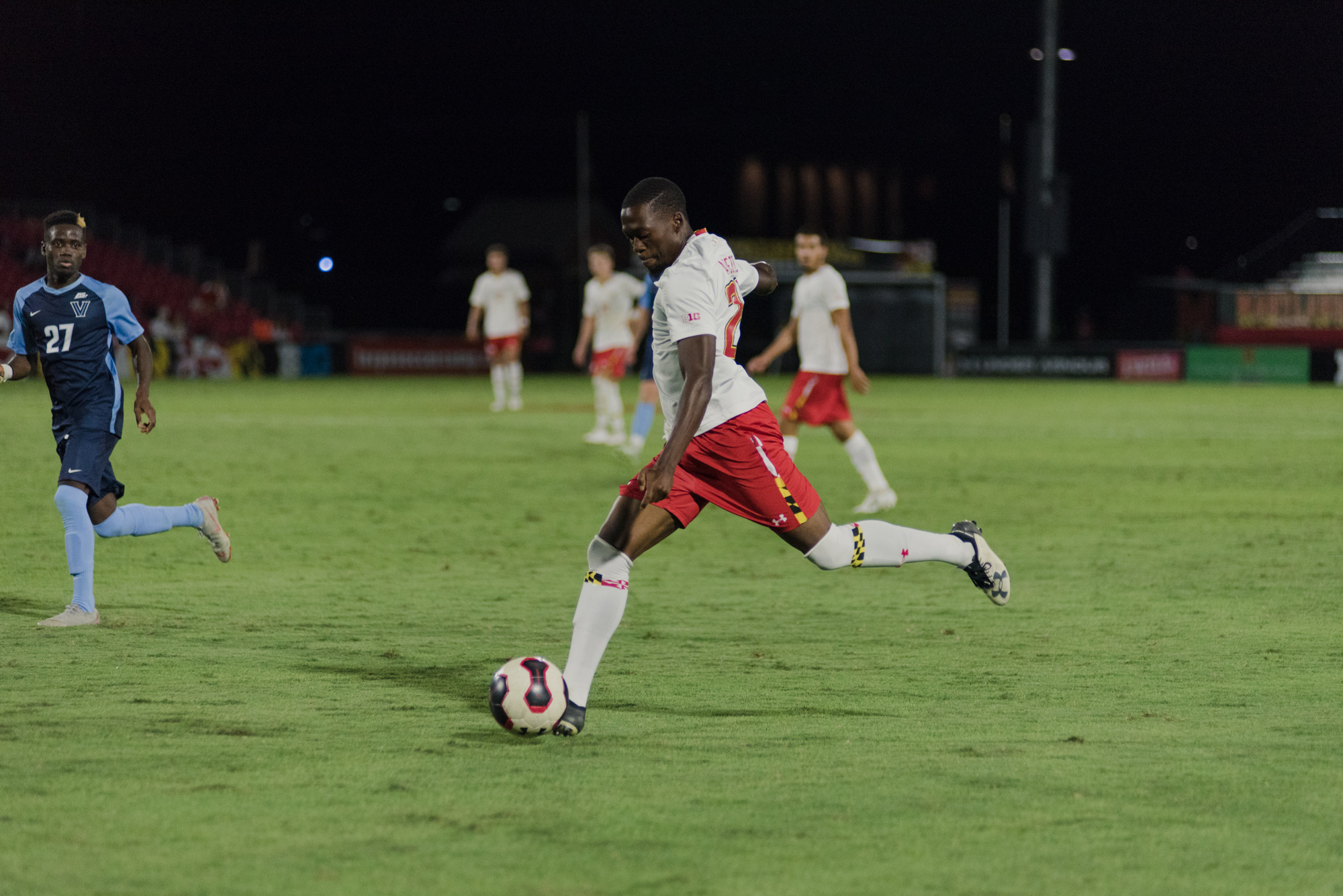 In the 66th minute of Maryland men’s soccer’s 3-1 win over Rutgers on Wednesday night, defender Ben Di Rosa limped off the field with some assistance from a trainer. Midfielder David Kovacic replaced him.

When Di Rosa reached the sideline, coach Sasho Cirovski had a few words with him and patted him on the back. Cirovski then walked toward the substitutes and motioned for summer walk-on defender Chris Rindov to go farther down the sideline and warm up.

Eight minutes later, Rindov entered his fourth match of the season. And in the 85th minute, he joined forward Fola Adetola as a depth player, assisting on a second-half goal to help the Terps overcome the depletion of available players and earn their first Big Ten win.

“A lot of people stepped up,” forward Eric Matzelevich said. “Really credit the culture in the program. If one guy goes down, everybody steps up.”

Entering Wednesday’s match, the attacking depth was already thinned after injuries to forward Paul Bin and midfielder William James Herve and while midfielder Malcolm Johnston served a one-game suspension from his red card against Wisconsin.

Then, in pregame warmups, midfielder Brayan Padilla — tied for the team lead in goals — suffered a knee injury that forced him out of the lineup.

Cirovski said after the game that the team fears the sophomore tore his ACL. Pending an MRI, that injury would sideline Padilla for the remainder of the season.

[Read more: Despite playing with 10 men, Maryland men’s soccer gutted out a draw with Wisconsin]

But instead of allowing the injury to turn those plans into fleeting dreams, depth players rose to the occasion and helped earn a result Kovacic that said the team dedicated to Padilla.

Adetola entered the game with five minutes left in the first half, adding only a foul to his stat line. But in the second half, the forward — who had only played for about 50 minutes in the team’s first eight games — injected some much-needed energy to the attack in close to 27 minutes of action.

Since he grew up in the area, a number of players were familiar with Adetola’s ability, though it hadn’t been featured in a game until this season. On Wednesday, he delivered a performance that Matzelevich said was “vintage Fola,” with the passes he was making and the energy he gave the attack.

“I knew I had to come in and step up,” Adetola said. “I knew I had to bring a spark to the team, and I was just waiting on the sideline for my moment. And I was happy to get in and make an impact.”

In the 78th minute, Adetola’s spark ignited a celebration. A free kick was deflected to his feet, and he wisely tapped a pass to Kovacic for a step-in shot that pushed Maryland to a 2-1 lead.

Kovacic’s second score was a closed-in, one-time shot that came from a crafty headed pass across the goal mouth. Rindov helped offset the loss of Di Rosa defensively, and delivered the pass off another set piece that cemented the win for the Terps.

Cirovski also summoned midfielder Jacob Chakroun off the bench for just the second time this season, with the freshman being buried behind a host of other talented players at his position. After having played just 16 minutes against UCLA, Chakroun made his Ludwig Field debut and impressed the seasoned coach with his fluidity on the ball and attacking penetration.

As the season progresses, Maryland hopes to get Herve’s presence back in the lineup eventually. But now that Padilla may join Bin as one of the players lost for the season, this team will need younger players to replicate the success it found in suddenly larger roles on Wednesday night.

“You never know when you’re faced with different levels of adversity,” Cirovski said. “We always stand tall, and find ways to overcome them. And that’s what our challenge is now.”