After months of pushback, Seven Springs apartments will again host a Shuttle-UM stop 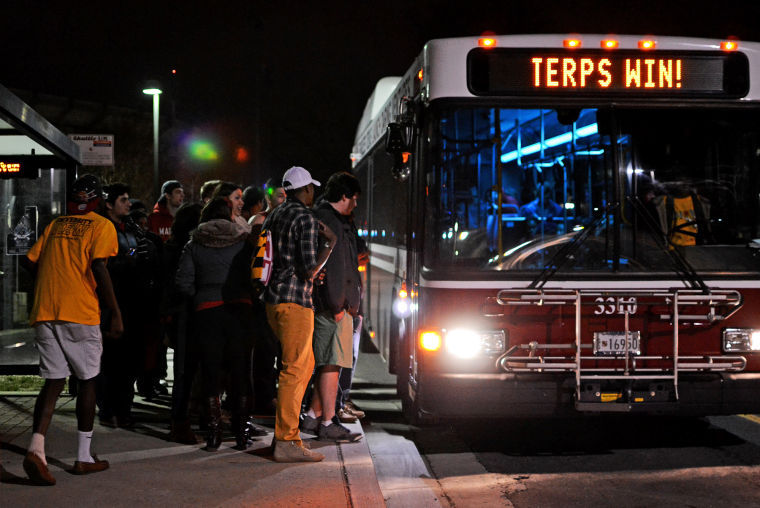 After months of emphatic pushback featuring a state senator, a nighttime protest march and dozens of phone calls and emails, the University of Maryland’s GSG and residents of Seven Springs Apartments finally have reason to celebrate.

Shuttle-UM will resume service to Seven Springs after winter break, picking up after a semester-long hiatus that began over the summer, when the apartment’s management company cancelled its partnership with the university’s Department of Transportation Services.

For the next semester only, the shuttle will stop at Seven Springs three times per day — belatedly providing residents with the transportation that remained advertised on the apartment’s website until mid-July, well after many had signed onto leases.

Even though the shuttle’s service is limited and has a set end date, residents and the Graduate Student Government executives still take heart at the small victory.

“I think it’s safe to say that this is probably the best we’re going to do,” said Patrick Banner, a physics doctoral student who lives at Seven Springs. “I’m thankful for that.”

DOTS is working with the GSG to find funding for the service. Seven Springs has not offered to contribute to its financing.

In a statement emailed by a university spokesperson, DOTS wrote that it is temporarily offering the service so that residents can find housing “more suitable to their transit needs.”

After Seven Springs cut the shuttle service — citing a declining pool of riders and a $4,000 hike in the price to host a stop — its management company supplied residents with SmarTrip cards to cover the $2 fare to ride the WMATA Metrobus. But the company, Ross Management, plans to stop offering the cards at the end of the fall semester.

Still, Banner predicts the return of the Shuttle-UM will ultimately save him hundreds of dollars. It will also provide him a way to get to campus until his lease ends next summer, at which point he plans to start looking for a new place to live.

Ross Management did not respond to a request for comment.

Infuriated by the company’s short-notice announcement, the GSG launched a campaign over the summer to seek justice for the residents of Seven Springs.

Executives organized group visits to the property manager’s office, sent emails to Ross Management and encouraged residents to file complaints with the Consumer Protection Division in Maryland’s Attorney General’s office. They even got in touch with Sen. Jim Rosapepe, who represents Anne Arundel and Prince George’s counties in the Maryland State House.

Most recently, a group of residents and GSG members hiked the three miles it takes to get from Stamp Student Union to Seven Springs, marching along Paint Branch Trail after dark to flag safety issues on the path and call out Ross Management for unscrupulous business practices.

Last week, GSG President Annie Rappeport and Student Affairs Vice President Q-mars Haeri walked into a meeting with three university officials, prepared to make the case yet again for the shuttle’s reinstatement. Instead of resistance, though, they were met with a plan to renew the service.

“I’m still kind of stunned,” Rappeport said. “We fought for so long.”

But it’s not over for the GSG. Since the shuttle won’t start coming by Seven Springs again until next semester and Ross Management plans to stop offering SmartTrip cards at the start of winter break, residents are facing a month with no free motorized transportation. So, Rappeport said, the group plans to continue pressing the company to subsidize the Metrobus through winter term.

Rappeport added that the GSG is currently circulating a survey to Seven Springs residents to determine when the shuttle should stop by the apartment every day.

“The last thing we want is to go through all of this effort, actually have a positive solution, and then we pick the wrong times and the shuttle’s empty,” she said.

Additionally, Rappeport said she plans to work with graduate student groups to organize a fundraiser to assist DOTS in paying for the shuttle service. The GSG is thankful for the bus’s reinstatement, she said, and wants to chip in to help cover the cost.

Some residents aren’t rejoicing at the route’s return quite yet, though.

Danielle Koonce, a sociology doctoral student, is waiting to see if the shuttle’s service meshes with her schedule before she decides not to buy a spring parking pass. She’s seven months pregnant and bought a fall parking pass rather than walk a mile to and from the Metrobus stop near Looney’s Pub to the Art-Sociology Building every day.

In the four years Koonce and her family have lived at Seven Springs, she said it has done well in fitting their needs. But Ross Management really “pulled the rug out from under” them when it cancelled the shuttle, she said.

Since her family only has one car, which Koonce’s husband needs to get to work, they chose the apartment building partly because it offered the service. Koonce had to borrow a car from her parents to get to campus safely this semester. And she feels bad for encouraging friends to move into Seven Springs, only for the shuttle to be cancelled.

Though it’s been a stressful semester, Koonce stressed how grateful she is for those who advocated for her and her neighbors.