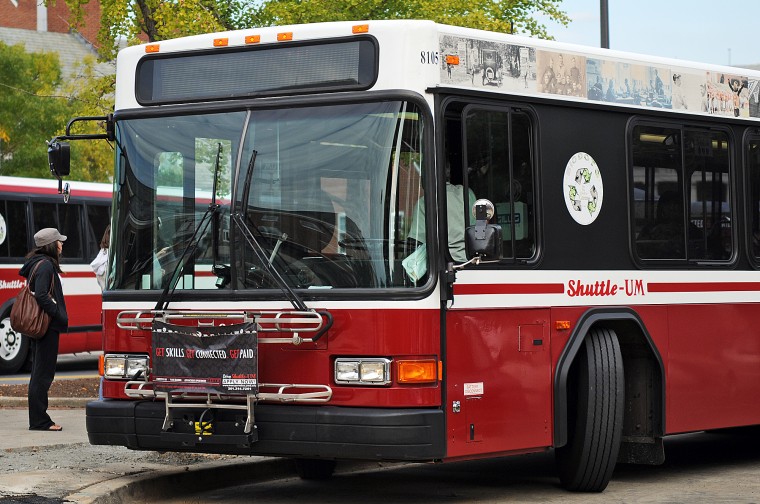 Buying a used car was something Naomi Fritts was planning to do down the road, once she had rebuilt her savings a bit — not a month after starting her second year of graduate school.

But when she found out Seven Springs Apartments wouldn’t be hosting a Shuttle-UM stop — unlike what the apartment complex had advertised on its website when she signed her lease — she felt like she had few alternatives.

Taking the WMATA Metrobus would mean a walk that’s about a mile long, regardless of whether she’s going to work or class. Making this trek everyday just isn’t feasible for Fritts — a seven year-long stint in the Army left the cartilage in her knees worn down.

“This is not the way I want to be treated as a tenant,” said Fritts, who is a master’s student.

Over the summer, Seven Springs Apartments withdrew from its partnership with the university’s Department of Transportation Services after the cost to participate in the shuttle service went up by $4,000. Months later, many residents are still frustrated by this decision as a longer commute eats into already limited study time.

And they’re not shy about their displeasure. As Seven Springs is largely home to graduate students, the Graduate Student Government has been working to advocate for residents and encouraging them to voice their concerns — through paying visits to the property management office, sending emails to the company that oversees the apartment and filing complaints with the Consumer Protection Division in Maryland’s Attorney General’s office.

They’ve even gotten a state senator involved. Sen. Jim Rosapepe, who represents Prince George’s County in the Maryland State House, has encouraged students to copy him on emails to the Seven Springs’ property management and corporate office.

“Sometimes when you’re advocating for people, the people themselves have made some kind of mistake,” GSG president Annie Rappeport said. “But these folks, really, I can’t see anything that they have done wrong. Like, they truly have gotten shafted, and it really, really, really stinks.”

Ross Management, the company in charge of Seven Springs, says the decision to pull out of the agreement was prompted by declining resident participation in the shuttle, as well as the increased cost. In an email, the company’s vice president of residential management operations re-asserted that the apartment could not continue subsidizing the service, claiming the majority of its riders don’t live in the complex.

“We do not anticipate future financial support of the UMD Shuttle Service,” the vice president, Don Stocks, wrote.

Rappeport says she doubts the shuttle will be reinstated. But that doesn’t mean the GSG plans to stop advocating for residents.

“I want us to come up with alternatives, because I don’t think we can any longer trust Seven Springs,” Rappeport said.

For one, the GSG is pushing for DOTS to expand its Nite Ride service area to include Seven Springs. Little Paint Branch Bike Trail, which runs along the front of the complex, is a scary walk to make at night, Rappeport said. And since the trail is unlit, the walk is pitch-black after dark.

Cara Fleck Plewinski, a DOTS spokesperson, wrote in an email that the department explored this option but determined it would substantially increase the amount of time it takes to pick up passengers.

“Our ability to pick up passengers efficiently is critical for the safety function of this service,” she wrote.

Rosapepe, meanwhile, is focused on ensuring that the sort of “false advertising” that happened at Seven Springs doesn’t happen again.

In an email, university spokesperson Natifia Mullings wrote that DOTS is following up with all apartment complexes that partner with the university regarding their use of shuttle services.

“We are working on a range of options to improve planning for potential changes to transportation services in the future,” she wrote.

Next year, Rosapepe said he imagines much of the issue will be solved because Seven Springs won’t advertise the shuttle service again. But in the meantime, he still encourages residents to email Ross Management to show the company that they’re “real people with real lives.”

“That’s why I had them CC me on the communication, because I hope [Ross Management] is going to act and help these students. And I want to know about it,” Rosapepe said. “And if we aren’t getting good solutions, I’m going to get back to [Ross Management] and the university for sure.”

Patrick Banner, an atomic physics doctoral student, recently included Rosapepe on a thousand-word email he sent to the property manager at Seven Springs. In a numbered list, he broke down his grievances against the apartment complex. He also demanded written confirmation that Ross Management planned to continue providing a Metrocard to residents during the spring semester, as it did for the fall semester.

Stocks wrote that offering Metrocards was meant to be a short-term solution, but Banner said he has a yearlong lease with Seven Springs, and can’t afford to fork over $4 a day to ride the Metrobus. Now, he’s thinking of cutting his losses and breaking his lease.

“I just hope that we can find some solution that kind of satisfies everyone’s wants and needs,” he said. “I guess I get that there’s some politics behind it, but the political nature of it does not justify how little effort has been put into finding a good solution.”