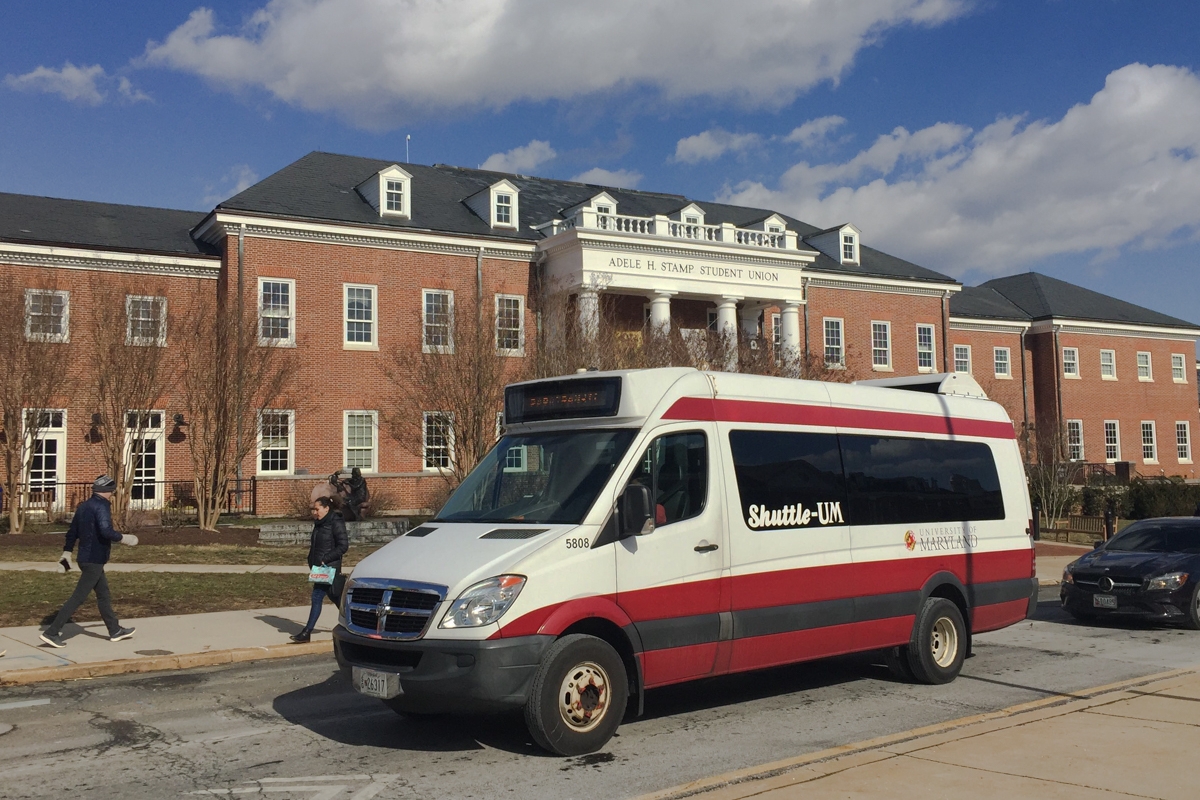 Limping on crutches, Jaiwen Hsu hurried from Van Munching Hall, trying to catch the bus to his dorm across the campus in Cumberland Hall.

“I called the driver and said, ‘I’m on my way, can you please wait?’” said Hsu, a sophomore English major. “And they said there was nothing they could do.”

Hsu has a prosthetic bone acting as his left femur, due to bone cancer he was diagnosed with as a child. So during his first two semesters, he opted to use this university’s paratransit system.

But since then, he has become “too bothered” with the program and has stopped using it. Though the university advertises the system as a reliable, timely service for students and staff with disabilities, Hsu doesn’t find it to be dependable.

Hsu said this is primarily due to the system’s lack of flexibility. He said drivers have been unable to wait for him if he’s going to be late, or to come earlier to an event if it’s ended ahead of schedule.

Cara Fleck, a spokesperson for the university’s Department of Transportation Services, said whether a driver will wait for a late passenger “depends on the circumstance.”

“Paratransit books up very quickly, and we do need to stay on schedule,” she said.

The flexibility issue is reflected in the system’s no-show policy, Hsu said. If a student calls to cancel a ride less than thirty minutes in advance, does not call to confirm their ride, or shows up more than five minutes late for their ride, they will receive a “no-show violation,” according to the DOTS website.

If a passenger receives this violation, their rides are to be cancelled for the rest of the day, the site reads.

Additionally, if a passenger gets this violation three times, they are subject to a $20 fee — as well as another $20 fee each time they commit a violation after that.

Fleck wrote that the fee is simply to “deter students from no-showing.”

“The time dedicated to picking up a student that no-shows could have been spent picking up another student who needs paratransit,” she wrote.

The system’s cons outweighed its pros, Hsu said, citing experiences when the bus would show up to the wrong building or take too long to get him to his destination.

“If I had an important test, I would just Uber. Or I would start walking, like, three hours in advance,” he said with a laugh.

Benard Bampoh, a senior computer science major, said sometimes his paratransit experience is slowed down by inexperienced drivers. Bampoh, who uses a wheelchair, said he’s dealt with drivers who don’t know how to use wheelchair ties, leaving him unrestrained on the bus.

“Some of the frequent drivers know how to do it, but the newer drivers — I know that they’re supposed to be trained, but it still seems like they have a hard time figuring it out,” Bampoh said.

Though Fleck said traffic and accidents can slow rides down, she has not heard of any specific experiences like Bampoh described.

Hsu said even if a student does schedule the ride in advance, there is a chance no rides will be available. Although the policy is that students need to schedule at least an hour in advance, he said he once tried to schedule a week in advance and all the rides were already taken.

“I don’t trust paratransit anymore,” Hsu said. “[It] had its ups and downs, but something that is supposed to be a reliable service shouldn’t have ups and downs.”

Caroline Triay, a sophomore communication major, also had a bad experience with scheduling paratransit services after she broke her ankle.

“I remember my injury happened on a Wednesday later in the day. I was trying to get the service by Friday, and I just couldn’t get in contact,” she said. “I had to find someone to drive me to class last minute.”

She said even when she was able to schedule transportation, she could not schedule the times she wanted, so she had to either leave early from class or get there late.

Ellie Mazzuca, a junior finance and operations management major, had a different experience than Hsu and Triay. Mazzuca, who used the system last semester for about six weeks when she sprained her ankle, said the system was convenient and helpful.

“It’s kind of annoying to have to book it so far in advance, but it’s not an Uber,” Mazzuca said. “It’s on-campus and it’s free. It can’t fit to everyone’s immediate needs.”

In an effort to make sure it could meet the needs of more students, DOTS added three more paratransit vehicles last year, and is launching an online platform that students can use to book rides, Fleck wrote.

For students like Bampoh, who have very specific needs, bus availability is still an issue. Due to weak neck muscles from his muscular atrophy, Bampoh is supposed to only ride on “sprinter” buses — shorter paratransit buses where he can sit near the front for a less bumpy ride.

But Bampoh said these types of buses are older, so they often break down. He uses the regular buses instead, and they cause his head to bump up and down with the bus involuntarily.

“I learned that lesson from elementary school when one bus ride left my back so sore that I could not lie on my back comfortably for days,” Bampoh wrote. “I do not want to have another back injury.”

Fleck said DOTS does “everything we can to accommodate students that request rides,” and urged any student encountering any sort of issue to contact the department.

Hsu believes that while the university has provided a free, beneficial service, the system needs improvement.